Why is kerosene stopping my red LEDs from illuminating?

I initially posted this on chemistry.stackexchange but didn't get any answers, so I'm reposting it here.

Long story short - we have an electronic product that is submerged in fuels (kerosene being one of them) and uses an RGB LED (click here for datasheet). Due to a sealing problem in the enclosure, kerosene has managed to get in and cover the PCBs. What's interesting is the effect that has had on the PCB. The PCB's functionality has been completely unaffected, apart from the fact that the red LED in the RGB LED module has completely stopped illuminating. We've replicated this ourselves manually by submerging 2 new PCBs in kerosene for a day and then taking them out and powering them up and seeing that the red LED stops illuminating entirely. The green and blue LEDs continue to illuminate just fine.

Examination of the failed boards shows that there are no other electrical faults. It is just the red LED that completely stops illuminating. We measured the forward voltage across each of the LEDs in the failure condition, but didn't notice any significant difference that would explain the fault.

After leaving the PCBs to dry, the red LED starts working again. So the problem is not permanent.

Looking at the last page on the datasheet, the LED material is listed as AlGaInP / GaAs. Is there any obvious reaction between kerosene and these materials that would explain why just the red LED stops working?

In both cases, there was no perceived effect on the LED - it continued to operate just fine. This would seem to indicate that the problem is not purely an optical problem between the kerosene and the LED. So far, the problem has only occurred after soaking the LED in kerosene for some time.

Update 2: I've taken a fresh PCB with LED on it (haven't done any tests yet with just the LED) and soaked it in kerosene. I've taken some close up photographs of the LED before soaking, after soaking while it's not working and after it resumes working after it's been left to dry.

What the photos show is that there is a very obvious bulge in the LED lens during the period when it's not working. Once the bulge recedes, the LED illuminates again.

Unfortunately, I don't have a camera set up on the PCB to see the exact moment that it stops working. I'd let it soak for about an hour before it stopped working. I checked on the LED every now and then and noticed no change in the LED brightness. I came to check it once and it was just off. My suspicion is that the change is sudden.

Judging by the swelling, I'm going to guess that there is some mechanical damage internally that's moving something and once the swelling recedes it springs back to position. 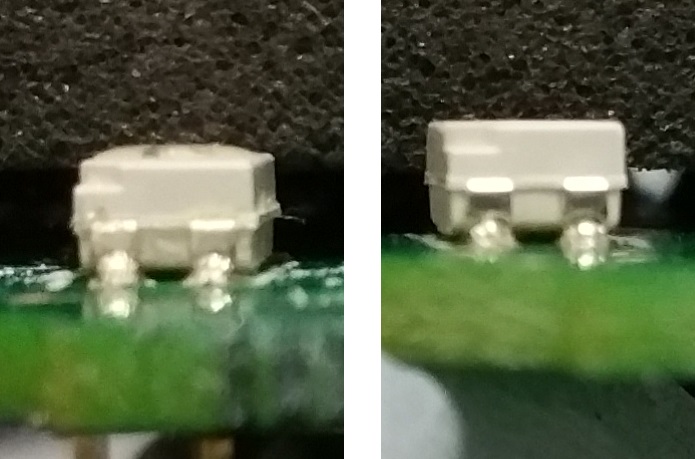 LED in failed state after soaking 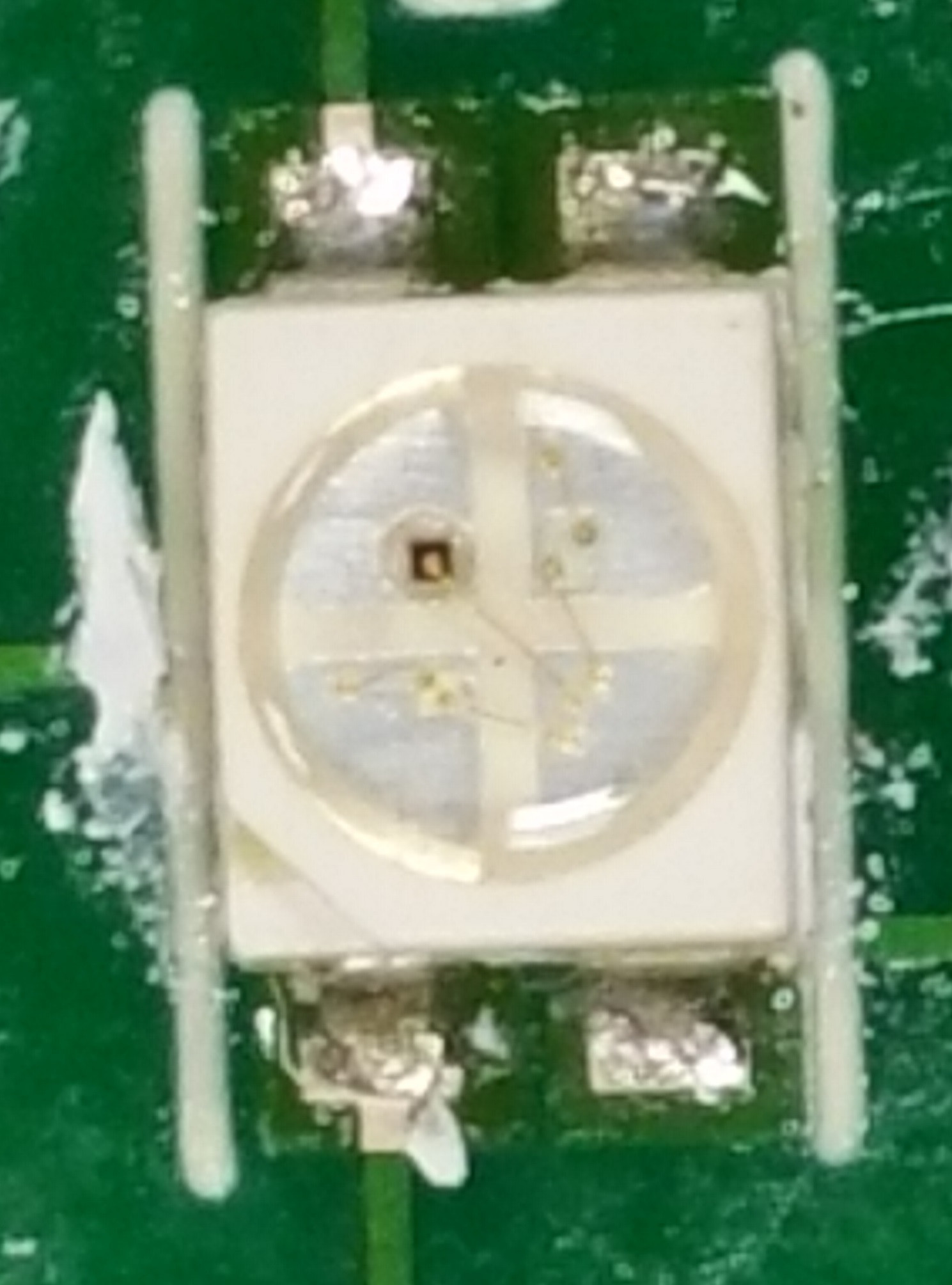 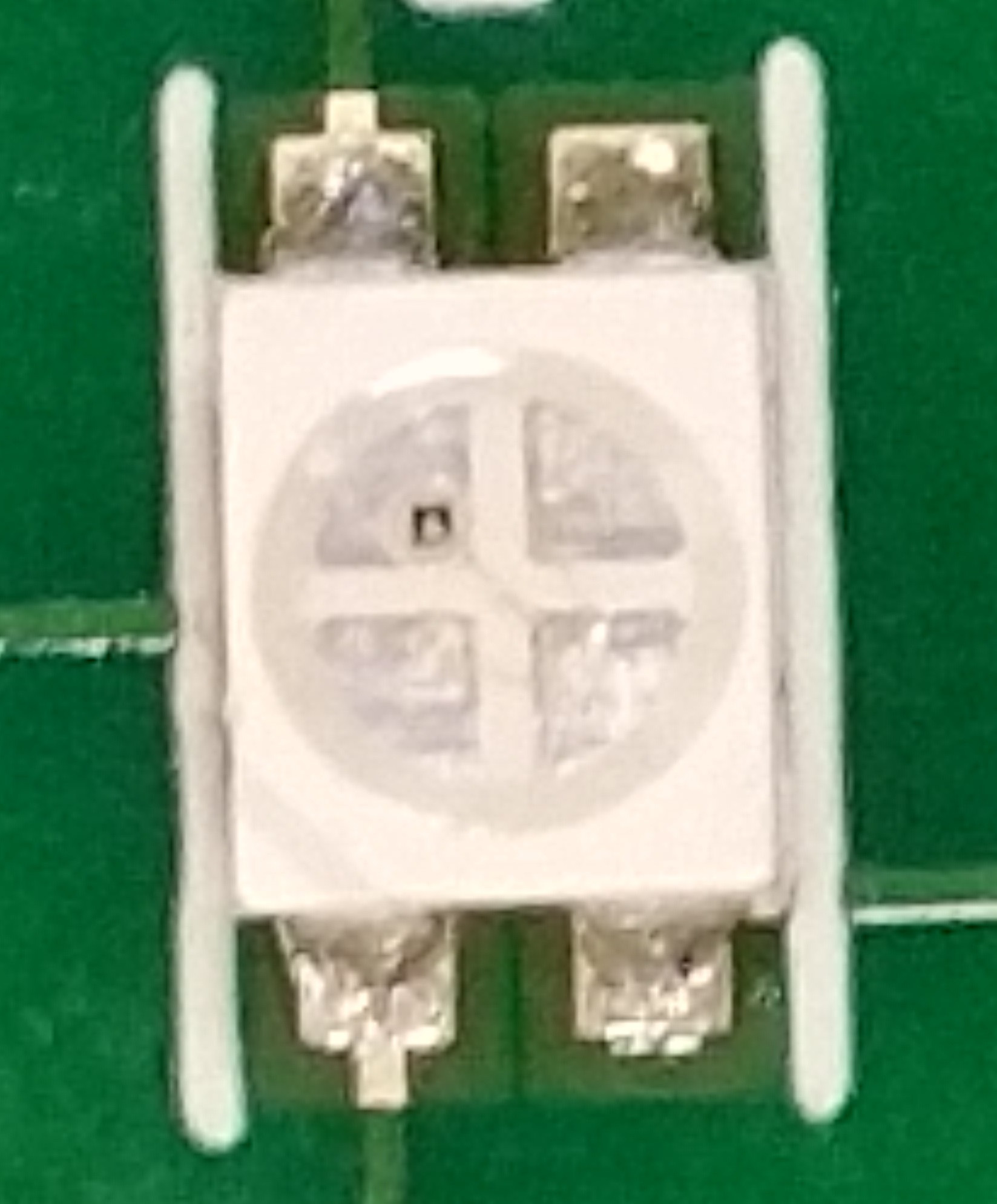 Left: Kerosene-soaked LED after being left to dry and in the working condition; Right: Normal LED 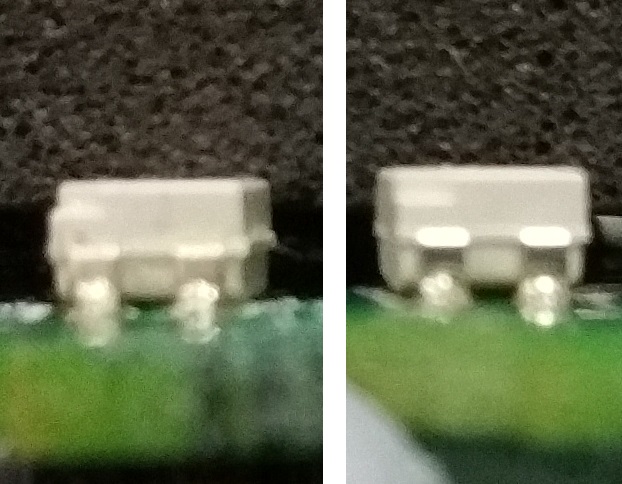 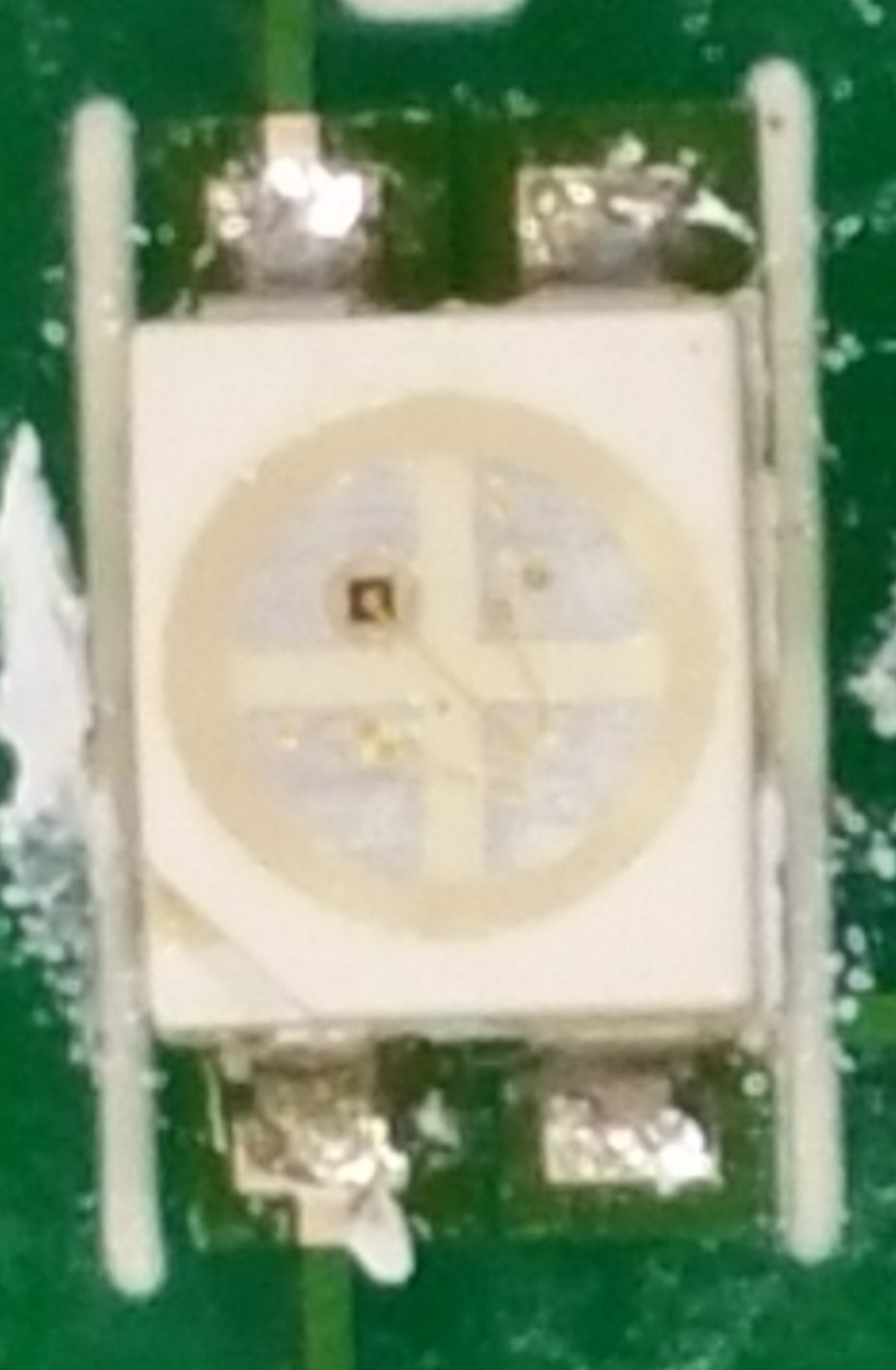 We measured the forward voltage and didn't notice any change.

Physically, I'm pretty sure this means the semiconductor interface is still producing photons at the same rate and wavelength as before.

So, something happens to those photons.

What you should do is get a working source of red light of the same wavelength (e.g. another one of your LEDs), extract the "lens" material from a "donor" LED:

e.g. by cutting it off with a razor blade, testing transmission of red light before and after having soaked that material in kerosene.

Since that lens is tiny, you should probably use something like a piece of cardboard with a hole punched through it with some kind of needle (don't let the hole get to small, lest you want to have much diffraction...) and put the lens in front of that hole.

My guess is that soaking the material in kerosene leads to a drastic change in optic properties, and that might very well mean that either

To rule out 2., you'd need a very very dark room and some way to guesstimeasure the distribution of light. So in effect, without optical design lab equipment, either way, Kerosene contains a mixture of different hydrocarbons, and those are soluble in other hydrocarbons, such as the transparent material used to protect the actual LEDs and act as a lens.

Most LEDs are potted with silicone today. Silicone has a good permeability for VOCs (volatile organic compounds, e.g. alkanes and their isomeres), which are part of kerosene.

VOCs entering the silicone can interact with the silicone matrix, changing its optical properties. Often observed damage: the potting/lens can get milky or diffuse, and yellowing can be observed.

Certain VOCs will be broken up by the blue light of an LED which usually leads to a blackening of LED potting/lenses.

Those effects are known to be (partially) reversible. I.e. the discoloration of the lenses will disappear if the VOCs are able to gas out again. This happens faster if heated under the LED's operating conditions.

So my explanation is: Edit:Highly speculative Large amounts of kerosene may contain also aromatic compounds, which are known to be optically active (e.g. See azo dyes pigments). Van der Waals forces can change the resonant behaviour of aromatic compounds, which is possible when the VOCs enter a silicone rubber matrix. This could explain why fractions of the kerosene achieve a red filtering behaviour when entering the potting.

Edit: I cannot rule out interaction of VOC with the semiconductor itself, but I habe difficulties imagining how this could work. The crystal is nearly impermeable for anything at room temperature hence the interaction can only happen at the surface of the dice. Because light emission happens everywhere near the pn-boundary I doubt that kerosene components can prevent the generation of photons. IMO only absorption and filtering are the effects to look after again.

Another culprit in LED deterioration is hydrogen sulfide, which can be found among other sulfur compounds in kerosene, too. But sulphur corrosion in LED isn't reversible AFAIK, so this can be excluded IMO.

My guess is that the kerosene absorbs the red photons and heats up the plastic lense causing it to bulge, which in turn causes dispersion of the photons. So you have the double effect of absorption and dispersion of the red photons. There is also the possibility that at some point, the heat produced swelling of the plastic, creates a high resistance connection, which goes back to "normal" after the LED dries.

0
Why is the red diode in my RGB led burning out?
7
Why are 'modern' high-efficiency LEDs easier to damage than 'old' LEDs?
1
Driving Constant Current Through 2 LEDs from 2 Batteries
1
On/Off toggle with delay using bi-color led
2
GPIO failing to drive 2N2222 & LED simultaneously
9
Failure of LEDs in the wet -- what's going on at the semiconductor level?
3
Troubleshooting defective LED bulbs
2
Replace/refresh 7 segment display of vintage 80's clock radio