I always understood that the point of using smaller capacitors in parallel was to provide low impedance at higher frequencies than the bigger capacitors, because the higher capacitance capacitors 'usually' had larger packages, so the parasitic inductance negated their capacitance from a certain frequency and up.

However, if both caps have the same packaging (0402 in this case), is there any benefit at all?

This is a bit of a controversial subject. Some people seem to feel that a capacitor beyond resonance has no benefit for bypassing. Others point out that even past resonance the part is basically just a very small inductor short-circuited to ground and it still has fairly low impedance.

This plot from Murata shows the (magnitude of the) impedance vs. frequency for three different capacitor values in the same package (0402): 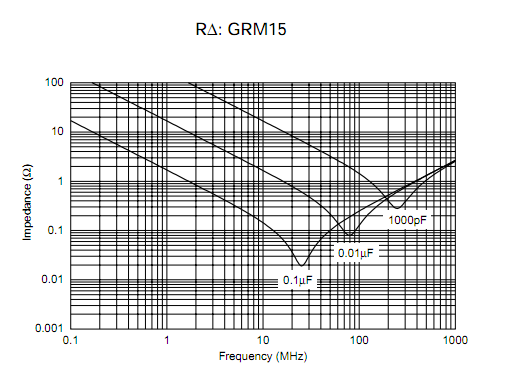 This shows that after a high value part (like 0.1 uF) passes resonance, a lower-value part (like 0.01 uF) just barely achieve a lower impedance before it too hits resonance and its behavior becomes dominated by its inductive parasitic, which is basically the same as in the high-value part.

That said, as others have pointed out, the more capacitors you can put in parallel, the more you reduce the series resistance and inductance of the ensemble of parts; so adding more parts is going to help at least a little bit.

I should also point out that if you start considering larger values in larger pacakges, say 1 uF in 0805 and 10 uF in an electrolytic A-size package, you can definitely improve the impedance at lower frequencies (below 10 MHz).

Assuming the inductance is essentially fixed for a given package size, the lower value capacitance will have a higher SRF, around which it will decouple more effectively. More than one of each value reduces inductance/ESR to lower impedance around this frequency. Sets of different values provides a low impedance over the entire range needed.

This Xilinx document (xapp623) goes into great detail on the ins and out of decoupling and why different values are used.

To quote a relevant part - they say:

You are correct: the benefit isn't due to the different values, but in the fact that they are in parallel, effectively halving the lumped ESR and high frequency inductance. As Mr. Johnson [8.2.4] put it:

The best way to get very low inductance is to parallel a lot of small capacitors.

This reminds me of another quote, however, repeated by Donald Knuth:

Premature optimization is the root of all evil.

Paralleling capacitors can have an undesirable effect due to resonance between the adjacent capacitors. For instance, using the data shown in the comment above, the equivalent inductance in the 0402 case size is approximately 0.4nH. With a spice simulation of a parallel 0.1uF and a 0.01uF capacitor with 0.4nH in series with each capacitor, the two 0402 capacitor packages become parallel resonant at about 60 MHz, with a following series resonance at about 80 MHz. With RF bypassing this may become critical.

Not the answer you're looking for? Browse other questions tagged capacitor parallel ceramic decoupling or ask your own question.

5
Substition of electrolytic capacitors in surface mount applications
5
Can a single, large multilayer ceramic capacitor replace the classic electrolytic + ceramic decoupling capacitor arrangement?
4
Approaching an ideal inductor
2
Can I use a single type of capacitor for all decoupling ( 1uF and 0402 )?
13
MLCC - Can I use high voltage rated caps for very low voltage scenarios?
13
What really causes series inductance of capacitors?
6
For decoupling an IC's power supply pins, is there any reason to use multiple capacitances when all the MLCCs have the same package size?
2
How to determine the decoupling capacitor values for the power bus of an RF device?
10
Why should the smallest bypass capacitor be placed nearest to the IC?
0
selecting the footprint size of ceramic capacitor for MCUs