I have one of those cheap 3.5mm > cassette adapters, to use in my car. I've purchased high-end ones (around $40) and I've purchased cheaper ones like this ($20) but I always get static/feedback from these things, no matter the cost (think of that noise you would hear when a mobile phone was about to ring around a tv/radio).

I did notice that if I hold the wire with my hand, as pictured below, the noise is drastically reduced, usually eliminated completely. 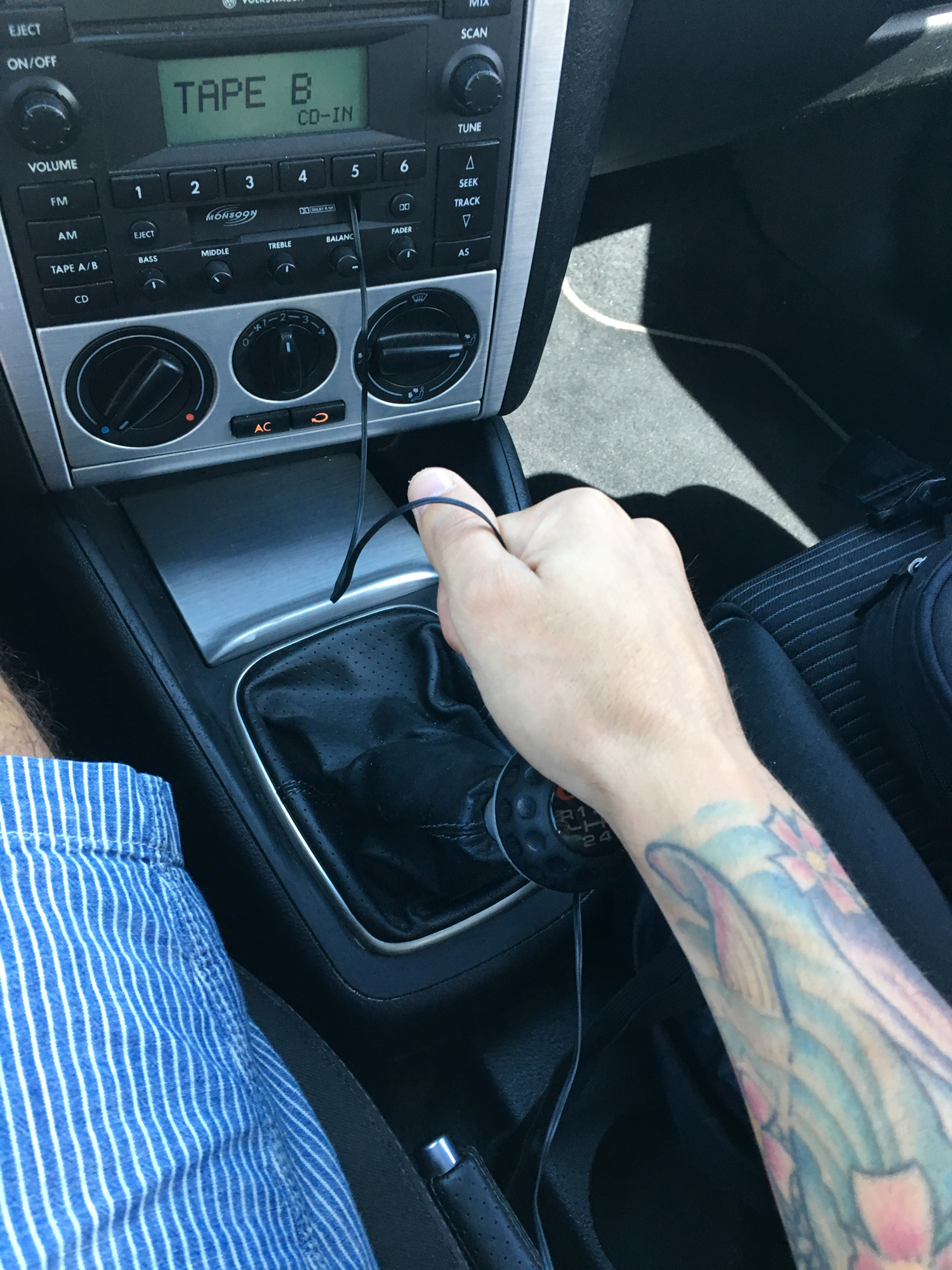 I assume it's EMF/RF interference from my phone's antenna causing the noise. If I'm wrong, maybe someone can point me in the right direction. I am technologically and mechanically savvy, but by no means an EE. I was thinking maybe I could wrap a section of the cable with aluminum foil (picture below), creating a bit of shielding, but the noise is still there. 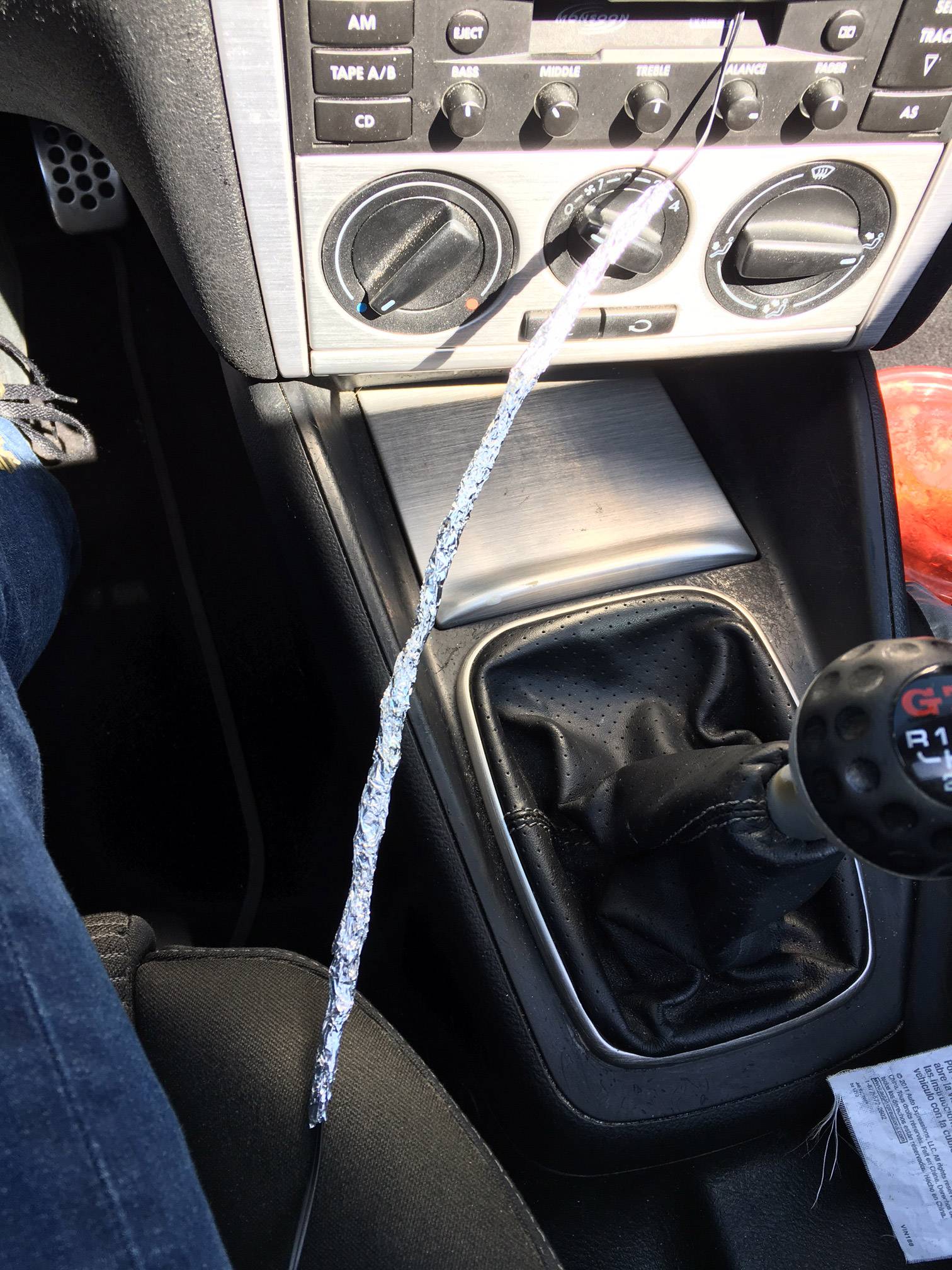 Does anyone have any better ideas as to how I can go about [cheaply/easily] creating my own shielding or eliminating the noise? Or maybe you know of a company that makes one of these adapters, which isn't prone to interference.

It sounds like you are getting RF interference from your cell phone. There's a few ways to go at it.

Number 3 is ugly and if you aren't good with stripping wires and soldering you could mess up the cable beyond your ability to repair.

Number 1 is the cleanest and probably best way to go.

You might find an old ferrite bead on an old wall wart cable that you could scavenge.

If you don't have a ferrite bead (or to kill time while waiting for one to be delivered) you could try this:

Wrap the cable around some soft iron (like a nail) just an experiment. It may well reduce the interference enough that you don't need anything fancier.

If wrapping it around a nail doesn't help, that doesn't mean a ferrite bead wouldn't help. It just means nails can't do the job of a ferrite.

Grasping it with your hand has two effects on the signal up the wire: it creates a shield around the wire and it puts a ferrite clamp around the wire. This because your hand is thick enough to stop external signals, as well as mainly water, and so can act as a ferrite.

As the foil had no effect, I would expect it to be from inside one or other device. Often I would blame it on trying to over amplify the signal from your source, but as grasping it removed the noise, I'm more of a mind that it's just some EMI leaking out.

My first action would be to get a clip on ferrite that I happen to have getting in the way in my tool box, and put it on. But that isn't a quick solution, unless you happen to have some. Farnell/onecall/RS/Mouser all stock something suitable, such as this page from Farnell , but I assume you're in the USA, and I don't know what the high-street electronic stores are like over there. (Minor detail to note: you may need to be careful as to which one you get; you want to block the noise (at whatever frequency that happens to be) while making sure your desired sounds don't get blocked.)

As for wrapping the wire multiple times in the clip on ferrite, doubling it has an effect, but after a third pass, there's not much benefit (though WURTH Electronic have some interesting graphs of the performance). There is a bit of debate about where the ferrite should be put; source end, middle or receiver end. I would say receiver end would have most benefit for your problem (as you're trying to stop noise getting into the tape), but if the noise is coming from the tape device, this could make it worse (the noise may get reflected back up the cable into the player).

In short: get a clip on ferrite, add it to the end nearest the player.

RF interference is causing the sound on your radio. High frequency signals choose to follow the path of lowest impedance/inductance. One way is to block and increase the inductance with another material, and most materials will do this to some extent. But ferrite will do this the most. Usually I'll wrap the cable around a ferrite ring or post. Another thing that sometimes works is simply creating a coil. The other way to rid yourself of high frequency noise is to shunt it to ground (in this case the car body) with a capacitor that has a lower inductance but that is harder to construct as you would probably have to have access to the wires to create a low inductance pathway.

It's RF Interference. Your tried on aluminium foil wrapped done nothing. You will need to use a good coaxial cable, and make the outer jacket to GND. Magnetic head is really sensitive to noise. On the dummy cassette, it is also better if it's shielded with GND.

Not the answer you're looking for? Browse other questions tagged audio cellphone interference shielding emf or ask your own question.

5
Non-metal cases
1
Reduce Interference in Wireless Mesh Network
3
How to minimize hash noise in amplifier mounted near boost regulator
3
Signal Noise in Bluetooth Adapter when Using SLA Battery
24
What set the speed in a cassette tape recorder?
3
Audio Noise with 5532 Opamp
0
Reduce clicks when switching over cd4066
0
Could shielding (not grounded) affect signal integrity?
0
How to reduce RFID interference