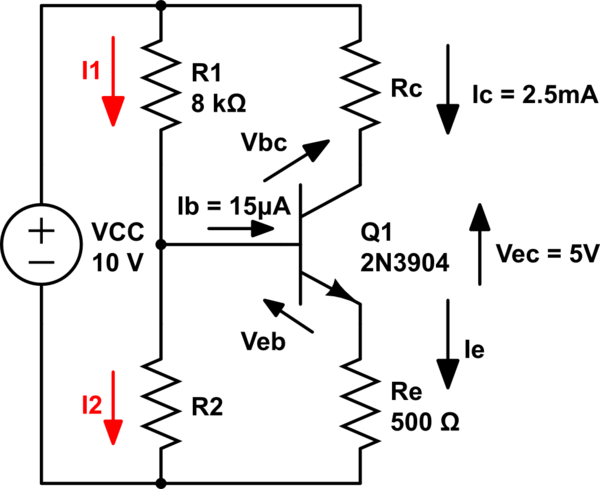 And I am trying to calculate Rc and R2. I started by adding the currents but I am not sure for I1 or I2:

Is it true that Ie = Ic + Ib or is it true only when the transistor works on the linear region?

(First thing to do is to make explicit note that the bottom node of your circuit is to be taken as ground, or \$0V\$, to simplify discussion. Any node can be arbitrarily made 0V. But you only get to do that with one node and no more. So that's my \$0V\$ node.)

(Take note of the fact that \$\beta = \frac{I_C}{I_B} \approx 167\$, which is typical for an active region, small signal BJT like this. Just a quick confirmation of an earlier assumption before going forward. A second directly explicit confirmation is the statement on the diagram that \$V_{ce} = 5V\$. Note, though, that they say this for \$V{ec}\$, which is probably inconsistent with the usual nomenclature used and so I'm assuming they don't really mean \$V_{ec}\$ but instead \$V_{ce}\$.)

Since \$V_b = 1.95V\$, we can now compute \$I_1 = \frac{V_{CC} - V_b}{R_1} \approx 1mA + 6\mu A\$. I added that last little bit there so that you can see that the indicated base current doesn't materially change the value of \$I_2 \approx 1mA\$. In short, the voltage divider at \$Q_1\$'s base is stiff enough so that reasonable variations (or incorrect assumptions about it due to \$\beta\$ being different than estimated) probably won't materially affect the design calculations. So now we can compute \$R_2 = \frac{1.95V - 0V}{1mA} \approx 1950\Omega\$. (Slightly less or more depending on if you decide to get all technical and account for some wayward \$\mu A\$ that I've been suggesting you ignore, for now.) That's not a standard value resistor and it appears that your problem hasn't been using entirely standard values, anyway. But the problem does use rounded values, so I'd put down \$R_2 = 2k\Omega\$ as the answer there.

SIDEBAR: From my notes here you may remember that I said \$V_{be}\$ might be \$5mV\$ less, but also that \$V_e\$ might be \$7.5mV\$ more, so the estimated value of \$1.95V\$ for the base voltage really is pretty close despite those second order comments, earlier. You could go back through all this, using some of these newly developed resistor values and make some re-estimations to narrow things down. But honestly, you don't really know the value of \$\beta\$ for the transistor, anyway. Nor, technically, a more accurate value of \$V_{be}\$. Those things will be buried into the model parameters for the part and, even then, actual parts do vary. So there's no point wasting further time on this.

P.S. No, I didn't do any simulation to check the work. I didn't feel a need in this case. Chances are that the base current will be even lower (as the \$\beta\$ of a typical 2N3904 that I have laying around here is closer to \$250\$ at these currents and at room temperature [15mW heating on the BJT in a TO92 will add perhaps \$3^{\circ}C\$ and isn't going to mess with this or anything else by much.]) Also, the \$V_{be}\$ is likely to be a little lower than the estimate I used, and this will slightly raise the collector current a bit. But there's no point in nailing it down further partly because real parts do vary and you need to make designs that work without depending on fine details you can't and don't control. The operating point of this circuit will be about where it is calculated to be. And good enough for most uses even with the variations of BJT parameters. So there's no point in my simulating it. It would be a looking for "foolish consistencies." (Or trying to make sure I didn't screw up. But this is just too easy for that, so I wasn't worried.)

Normally Ib is much less than Ic, perhaps you are missing a decimal point. Besides that the 8k base R can not source more than 10V/8K =1.25mA if Vb was 0V.

Both these suggest your Ib is incorrect.

Normally you compute Ve from Ie then the other node voltages determine the R values.

Answer to your questions:

1.) I1 is a current through the voltage divider which provides the necessary base voltage VB across R2. Normally, R1 and R2 are chosen to allow a current I1 that is at least I1=(10xIB). I think, this is ensured in your circuit.

3.) I do not understand the question. Perhaps the answer is contained in 2) ?

1.) During calculation, the voltage VBE is assumed to be app. (0.65...0.7) volts. This estimate is sufficient because you have an emitter resistor RE (emitter degeneration, negative DC feedback) which reduces the sensitivity of the circuit to VBE uncertainties. This is the classical method because the exact value of VBE (which allows the desired current IC) is not known.

This stabilization works good because you have provided a relatively stable (stiff) voltage VB at the base. Therefore, the voltage VB depends only a little on the base current IB (which has very large tolerances).

The circuit and the currents look reasonable and realistic. I do not intend to calculate for you all resistors; instead I gave you some hints for doing it by yourself.

Circuit simulation (PSpice) confirms the design. For IC=2.515 mA the base current is IB=16.21 µA. Your design confirms that the collector current IC depends on VBE only - the resistors R1 and R2 are nearly independent on the base current IB (due to the "stiff" voltage VB and RE providing DC feedback). When the additional base current through the voltage divider is assumed with IB=0 (unity-gain buffer between the base node and the voltage divider) the collector current is still IC=2.56 mA.

Vbe is 0.7V and Veb is -0.7 (typically considered during analysis).

Not the answer you're looking for? Browse other questions tagged transistors current amplifier npn or ask your own question.

10
Why is a BJT considered “current-controlled”?