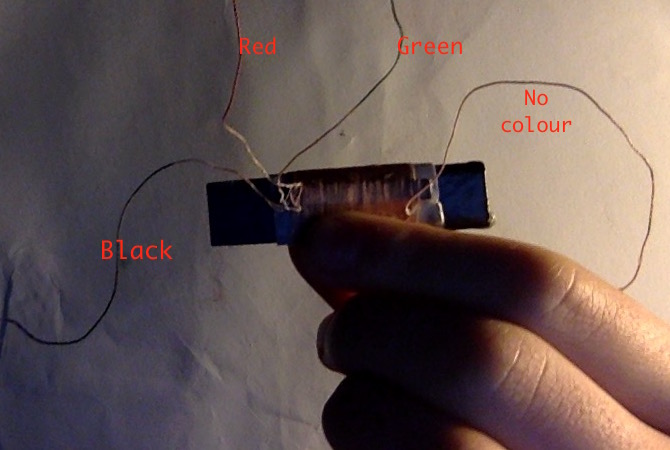 I recently bought a few electromagnetic coils wrapped around ferrites. I was intending to use them to induce a voltage from surrounding magnetic fields. When I went to wire them however, they seemed to have four leads instead of two. Cannot find an answer anywhere. Possibly I am searching the wrong thing? The leads are black and red (+ and -) and then green and a colourless wire. Could this be for AC? As I mentioned, I am a beginner.

You have a ferrite rod antenna for an AM radio, exactly as the description says. You should have included that in the question originally.

There are several ways it could be configured, but two of the wires (one uncoloured- Copper) refer to the two ends of the main (full length) winding.

The other two are anybody's guess. The best way would be to get the datasheet from where you bought them - or buy new ones, this time with the "no datasheet, no sale" rule.

Failing that, there are two common possibilities.

(1) One of the three wires (probably Black) is connected to Copper, and the other two are not. (Use a multimeter). Then Copper and Black would be connected to the tuning capacitor to form the main resonant circuit, tuned to the frequency you want to detect. They also form the primary winding of an RF transformer.

The other two form a low impedance secondary winding, which you can connect to an RF amplifier (or even just a diode if you're making a crystal set) and/or a long wire antenna.

You'll have to guess or measure the transformer turns ratio but 7:1 is fairly likely.

(2) All four are connected. Then the other two wires are two different taps on the primary winding, not an isolated secondary. You can use one tap for the antenna (and black for ground) and the other for RF amplifier, detector etc. But again, without the original datasheet and applications circuit, it's all guesswork.

To emphasise, both circuits below are just guesses.

You certainly won't be able to detect DC magnetic fields with them, but you might pick up AC (50 or 60Hz) with them, untuned.

There are only six combinations of two leads. The two ends will be the pair that has the highest resistance between them. Using one end lead as a common, the others will have increasing resistance in sequence from that end.

Not the answer you're looking for? Browse other questions tagged radio coil induction or ask your own question.