Shouldn't it be a decaying exponential? In Sadiku's Fundamentals of Electric Circuits, he defines both iC and iR as going out of the node, so that ic+ir = 0 ==> ic = -ir. That's how he makes the negative t appear. It's not very intuitive.

Shouldn't the math work itself out and give me the same expression independently of the current direction I assumed?

Is there any systematic way of defining currents and applying KCL without ever running into these sort of problems?

I made the same mental mistakes all the time, too. Rather than being very careful about direction (and therefore sign), I'd just toss the salad together. Partly, because I had so much confidence in mathematics, generally. Over time, I've not unlearned that rash behavior. But I've supplemented it with taking time to cross-check myself, later. And, to being able to recognize when a result is silly on its face, when I get such a result, and to go back and recheck the signs, again.

So this is where rigor comes in and gut instinct needs a harness of sorts.

Here's how I'd lay out the schematic you are analyzing, on paper: 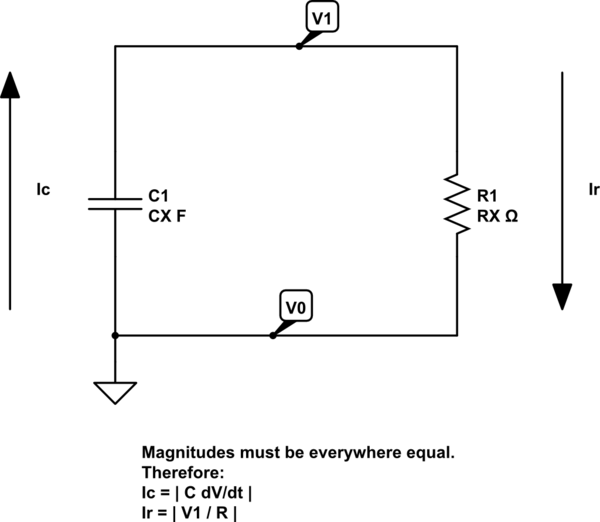 So. What now? Well, the rules are that charge isn't allowed to collect in a node. That's basic physics. If much charge (and it's not much) is allowed to accumulate in a node, you could move heaven and earth with it. It's that powerful. You also know that when you sum voltages around any loop, that you should get back to where you started, in the end.

It is very tempting to look at those arrows and to imagine that it's all part of a circle of current, so it must be the same current so it must also be the same sign. So if one is positive, the other must be. Or if one is negative, so must also the other be. But that's where you get into trouble. The rule here is NOT that a circle of current always has the same sign! Mentally, it sure seems that way. But that is a very slippery slope and it is really just a mental short-cut that, this time, gets you into trouble.

The physical principle to apply is that charge doesn't sum into a node. A node is always neutral. So all of the incoming current must be equal to all of the outgoing current. You can pick any node you want and that rule remains true. Nature simply doesn't allow much charge to accumulate and, where it does, one has to work very hard to make something able to hold even very tiny amounts. (Capacitors, obviously.)

So now the rigor comes in. Let's start out doing this simply. We know the following must be true about accumulating charge at the node:

Therefore, thinking about the rate of change of charge at the node:

Pretty basic stuff. This just means that the net current into/out of either node is always \$0A\$. That's not a surprising result. It's also obvious from a basic physical understanding.

Now, let's use the above and plug in your mental assumptions about the circulating current and see where that takes us:

Now you face a profound problem in your earlier mental thinking process. If the above equation is true (and it is) and if it is also assumed to be true that \$I_c = I_r\$, then the only possible solution set for the above equation is if \$I_c = I_r = 0A\$. But you already know that isn't true. You are talking about a real situation where there will actually be a non-zero current -- though changing.

Of course, this would have been obvious right away had you been focused only on the node called \$V_1\$ and realized that the incoming current into that node must have the opposite sign of outgoing current from that node.

Regardless of how you get there, things are now clearer. We must have:

In your solution, you have written the differential equation for a charging capacitor. Clearly, with your nominated current direction and assuming the top plate of \$\small C\$ is initially positively charged, the circuit represents a discharging capacitor where the rate of change of capacitor voltage is negative. An appropriate solution is presented below.

This also bothered me for a while until I went back to the basics and understood where everything comes from.

The way I look at it, without taking anything away from the other answers here, has to do with the passive sign convention (PSC). You could analyze this circuit in two different ways: KVL or KCL.

If you use KCL and using the same node you have and assuming the currents are going out of the node: 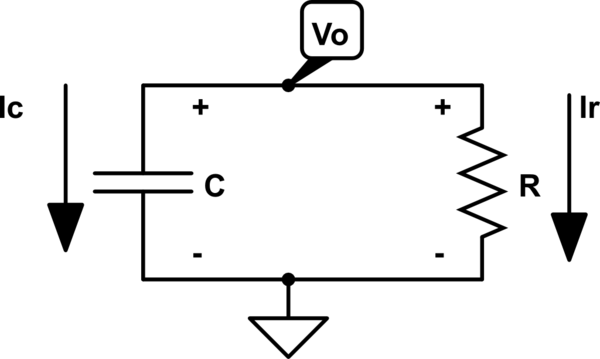 From there is easy to see, using the passive sign convention, that

Here is an excerpt from Nilsson-Riedel Electric Circuits book

So for the capacitor following PSC, you have: 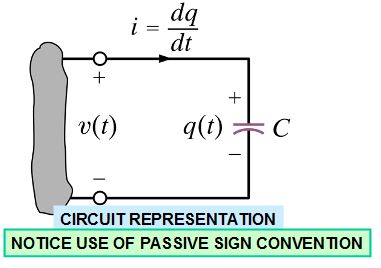 You see how the current is going into the element through the + sign first.

Now if you had chosen the capacitor current going into the node instead and keep the resistor current in the same direction then, by the PSC, the relationship between current to voltage is negative:

See how the current comes out of from the + terminal in the previous image. If you were to apply KCL again, with the capacitor current this time going into the node:

Eventually the minus sign embedded in the capacitor current will leave you again with \$ i_c + i_R = 0\$ and you will arrive at the correct differential equation.

If you used KVL and treat the capacitor as a source, you could think of it as something like this: 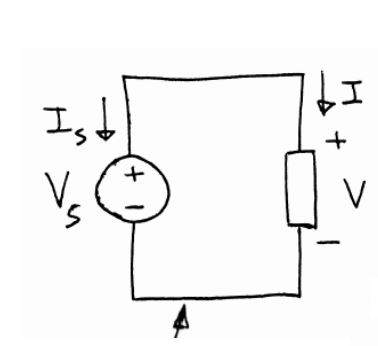 Where \$V_s\$ is the capacitor voltage and the other element is the resistor. Here the source follows the PSC too, that's why you see \$I_s\$ going into the source. From the circuit you can see that \$I_s=-I\$. That's why when using the PSC the sources (active) have negative power since deliver the current and the passive elements have positive power since the consume power.

If you further substitute \$I_s=\mathrm{C}\dfrac{dV_s}{dt}\$, you end up with the same differential equation as before. Hope this gives you a another perspective.

Not the answer you're looking for? Browse other questions tagged capacitor current circuit-analysis or ask your own question.