How to connect buttons to gates with status LEDs?

I'm playing around with 7400 series gates and I wonder what the best way is to connect some buttons as input and how to add some LEDs to make the input visible.

I think I have 3 choices:

I think it should be 'obvious' that the switch and gate must work without the LED.

Otherwise you can't be sure any of your logic circuits will work without the LED, which would be a Heisenberg Effect, the act of observing the circuit may be changing the circuit's behaviour.

So 1 is a bad approach; the LED+current limiting resistor should be in parallel with the gates input, after the switch. Dropping voltage across a LED, as in 1, when driving the input is always a bad idea. The voltage drop across a green LED would probably be so big that the logic gate wouldn't work, and even a red LED might effect some logic families. That is what I mean by a 'Heisenberg' effect; adding a monitoring LED changes the behaviour of the circuit.

Which logic state the button/switch should drive likely depends on the application logic (and how you might be trying to minimise gates), so both 2 and 3 may be valid in the same application.

I might check that something is not connected with a multi-meter.

When I am playing around, I like to be able to add, remove and move 'observation', so I would use the LED+resistor arrangement in either 2, 3 or both to observe any point in a circuit.

EDIT:
I am not suggesting you use LOW == true.

I am suggesting that it is often convenient to 'observe' either true, false, or both.

I am attempting to alert you to the more general monitoring issue which happens when you construct actual circuits for applications, representing complex expressions, with many intermediate terms.

In general, logic circuits will have gates in series with gates. Then it may be very helpful to put an LED 'inside' a sequence of gates to make it easy to monitor a partial result. Sometimes it is easier to understand the behaviour of the overall logic circuit when a specific partial result is visible, and that partial result may need to be true or false. For example it is often useful to see if any input of an AND gate is false, and the input of an OR gate true.

So don't base the approach to logic state monitoring on the idea that only true is important.

Hence, a good strategy has the properties:

I agree with gbulmer in that approach 1 is not desirable, but approaches 2 and 3 are both fine and depend on what kind of output you'd like to see from them.

The 1st approach isn't as "safe" (regarding logic level voltages) as the 2nd and 3rd approaches, which use the 10k resistors. Personally, I tend to use the style of approach 2 because I like to have an active HIGH output, but it depends on your own preference.

A decently prominent problem with approach 1 is that the LED will cause a voltage drop, so the logic gate won't actually see your logic level voltage, but rather something smaller. Approaches 2 and 3 don't have this issue (I use them frequently with I/O pins on mirocontrollers)

It is important to recognize that TTL used higher impedance current limiting on the high side driver and Similarily with input currents.

The TTL standard threshold voltage for all families from 74xx to 74Lsxx to CMOS 74HCTxx has always been to PN diode junction or Vbe drops of 0.65V each or 1.3V -1.4 nominal subject to temperature effects. This is also the floating TTL input voltage.

Thus you always put the LED on the high side since VIh=2.0V minimum giving 0.6-0.7V noise margin to the TTL input threshold.

The reason for this apparent asymmetric voltage margin is actually to balance the noise power or VI margin from stray noise.

Thus when you work out the actual input voltages example 2 is the only one which fails for not meeting the criteria for Vil=0.8max and Vih=2.0 min Example 2 has Vih=5V and but Iil inout current is 1.6mA so a 200 Ohm not a 10k pulldown would be needed to work as a "bandaid" and not recommended.

Not shown is a Red LED +220 Ohm pullup to 5V with a switch to ground with up to 60 Ohms driver impedance to get 0.8V max. While 7400 Output for a "0" output is 0.4V @16mA thus has a typical low output ESR < 40 Ohms and also works. This is how I might have done it only using active low for ON indicators. We called this "negative logic" or active low inputs , commonly used in TTL for set, reset etc.

A far more reasonable thing to do would be to have an LED that doesn't mess with your logic levels so that you can use it to probe any point in your circuit without having to consider what effect it may have on the circuit. 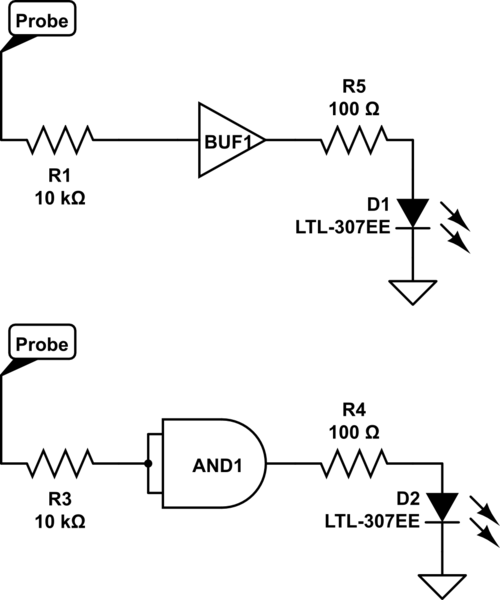 The point marked Probe in both of those diagrams can be connected to any point in your circuit to show the current state of that input (or output.)

The first uses a 7404 buffer. The second uses an AND gate as a buffer.

You can connect these with a wire that has a free end to use as a logic probe, or connect them permanently to some point that you always want to monitor.

Not the answer you're looking for? Browse other questions tagged led resistors logic-gates button or ask your own question.