I am using this op-amp circuit to buffer voltage (0-5V) received from MCU. Resistors at the output are used to limit the current controlling the solid-state relay. However, (Vin) coming from MCU is noisy and as a consequence (Vout). This makes the operation of the SSR unstable. How can I reduce or avoid this noise. Vin is an on-off square signal of maximum pulse duration of 20ms, to switch the SSR on and off.

A view of the PIC circuit is given below, Vin is taken from A0 pin. Next, a view of the noisy Vin signal taken from Oscilloscope is shown. And a zoomed view of this signal at the high-to-low change is also given. I am sorry for combining all images in a one, because I am not able to attach more than two images in this question. 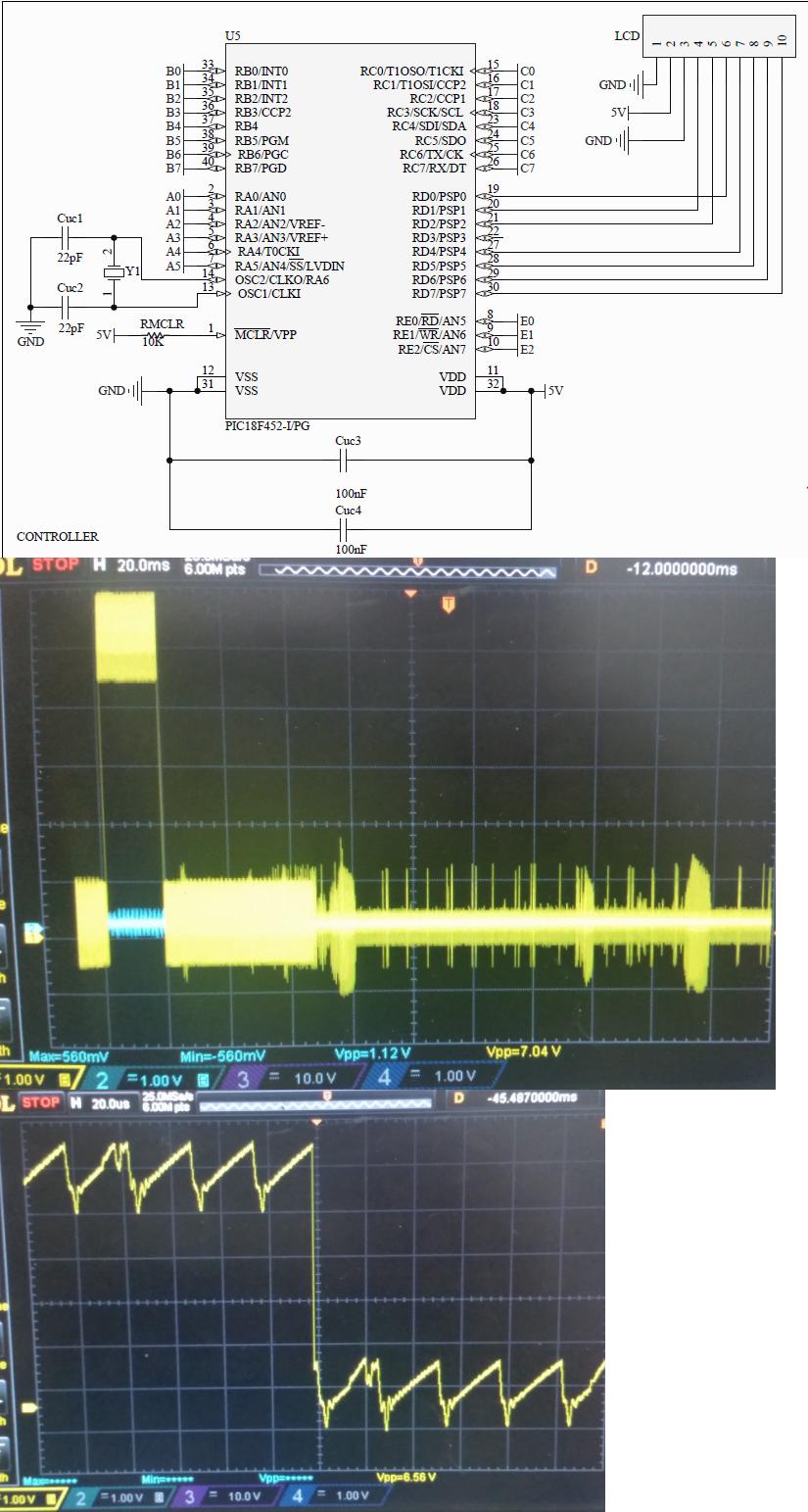 Is there any reason why you are using an op-amp in the first place?

Now in case this is because you must use the op-amp please note that: by placing a resistor in the op-amp's input you are reducing its input impedance. This setup is inducing the ripple you see in the scope. If by placing the input resistor it's your intention to reducing the current, you are doing quite the opposite because the opamp already has a high input impedance. Taking off the resistor will reduce the load on the microcontroller's output thus reducing the ripple.

Now, as the circuit is driving a LED, I would recommend a single rail op-amp like LM158. This will simplify your design as you won't have to worry about the reverse current on the LED.

If an op-amp is not a must, an open collector digital driver like the old 7407 would be enough.

Even if noise is an issue, you could use an Schmitt trigger buffer like 7417. These circuits work well up to 15 volts but there are devices available with higher rated voltages. Now, if you want to simplify even more. Use a transistor as others have suggested.

I don't think you need a Op-amp to drive a SSR. A NPN bipolar would do the job without the "noise" issue.

Anyway, the question regarding the noise can be solved by replacing the op-amp stage by a Schmitt trigger(nice comparator with hystersis). Set the Vref to around half of the MCU Supply. This will ensure zero false triggers for SSR.

More power to you.

Not the answer you're looking for? Browse other questions tagged amplifier noise buffer or ask your own question.

42
Correct formula for LED current-limiting resistor?
13
How do I calculate the resistor value for a simple LED circuit?

6
How can I track where this 471kHz noise is coming from?
1
Need a little clarification about this BJT common emitter circuit
0
Why does this circuit produce a static noise?
0
Avoiding RF noise from MR scanner
1
AMP Circuit (Buffer)
0
OP amp Comparator not working any tips?
1
Noisy op amp buffer
4
Help me understand this high voltage amplifier circuit for driving a piezo actuator