I've designed an active bandpass filter based on the one described in this article http://www.bu.edu/eng/courses/ek307/documents/ActiveFilterNotes.pdf (section 13.3.4). However, I want to use a single ended supply, and I want use a non-inverting configuration. I've designed a circuit (below) and run some spice simulations, and everything is working fine.

But then I noticed that R3 is connected to the negative rail (GND) not my virtual ground (Vcc/2). My instinct tells me that R3 should terminate at Vcc/2 but after some experimentation I found that it doesn't matter where it goes - ground, Vcc, Vcc/2, 10 megavolts - no difference.

How can that be? Can someone explain exactly what's going on here? Am I correct that R3 should terminate at Vcc/2? 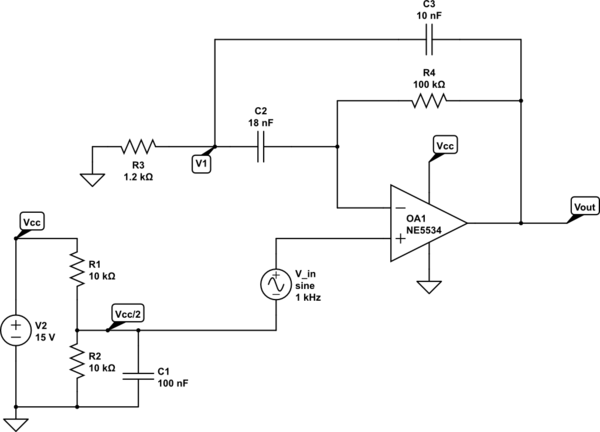 For single supply operation, the DC operating point should be at 50% of the supply voltage. That is what you have done with Vcc/2 connected to the non-inverting input of the opamp circuit which has a positive DC gain of unity. All other nodes remain unaffected from the single supply modus. In particular, connecting R3 to a positive voltage would not change anything because (under staedy-state conditions) the capacitors connected to the other node of R3 cannot allow any DC current.

However, it is to be noted that the classical bandpass response can be obtained only if the signal input is connected to the left node of R3 (instead of ground). In this case, the circuit provides the classical inverting bandpass response (multi-feedback topology). See Fig. 13-15 in the referenced document. Feeding the input signal into the non-inverting input node (as in your case) allows a minimum stop-band gain of unity only (no bandpass response with only a zero in the origin)! Instead, your design gives two negative-real zeros.

If you want a non-inverting configuration, I recommend to use a second-order Sallen-Key topology with a fixed-gain stage (unity gain or gain-of-two).

Not the answer you're looking for? Browse other questions tagged operational-amplifier active-filter single-ended band-pass or ask your own question.