I am working on a project and I want to use a \$12\textrm{ V}\$ linear actuator which travels in and out by reversing polarity on the 2 lead conductors. I also have a double pole double throw switch to wire in to accomplish this. I would like to have it travel one direction slow and one at full speed.

I believe there should be a way to accomplish this with the use of resistors and possibly another 3 way switch to activate them but can't wrap my head around how the schematic would look. The place that sold this to me suggested a potentiometer and motor controller but I am hopeful there is an easier way. Thank you so much!

Unless this is a tiny actuator the resistor you would need would be very large. For example let's say your actuator is something like this

The stall current is listed at 3.4A. Say you want to run this at half power so instead of 12V you want 6V to the actuator, using ohms law we can determine the resistor value = Voltage Drop / Current = 6/3.4A = 1.76 Ohms. Ignoring the fact that you can't find a 1.76 Ohm resistor and you would need to settle for something closer the power rating for this would need to be P=I^2*R = 3.4^2*1.76 = 20.34W. (There is an easier way to get to this number but I wanted to show the process) A 20W resistor is big, expensive and requires a heat sink and probably a fan to keep it cool. Also note that you are dumping a lot of power into this resistor to generate heat so from an efficiency standpoint this is very wasteful.

What you want is a DC motor controller which can control the direction of the motor and use an algorithm called Pulse Width Modulation (PWM) to modulate the 12VDC on the output so that the motor can be controlled at nearly any speed with much greater efficiency than a resistor. There are many motor controllers for sale online which you can find at an electronic hobby retailer such as sparkfun or pololu.

Here's the wiring for the DPDT reversing switch:-

As you can see, a separate wire supplies +12V for forward and reverse. So to make the the actuator go slower in one direction you just have insert something in one of these wires to drop the voltage.

The actuator probably has a DC motor inside. You could use a resistor to slow it down, or several different resistors chosen with a multiway switch. However the motor will draw more current as loading increases, causing the resistor to drop more voltage and slow it down even more. If the load is constant then you can just try different resistor values until you get the speed you want, but if it is variable then actuator speed will vary greatly, possibly even stalling if the voltage drops too much. If the actuator draws a lot of current then the resistor will get hot and needs to be a high power type.

A PWM motor controller solves these problems because it doesn't use resistance to drop the voltage, but instead rapidly switches the motor fully on and off with a variable ratio. The motor sees this as an average voltage that doesn't change with loading, and the controller stays cool because it is either fully on or off and so doesn't waste power.

The power supply can be wired directly to the controller, but its output may not be referenced to either power rail so to get full speed in one direction and controlled speed in the other you should switch both motor wires. The circuit would look like this:-

If using a resistor is a tolerable method then you can get different rates by placing a diode across the resistor so that it is bypassed in one direction.

A silicon diode will dissipate about 1 Watt per amp.
The diode will reduce speed somewhat in the fast mode due to the about 1 volt drop across it.

A Schotty diode will drop about 0.5 volt.

Resistors are not great because they reduce the available torque of a DC motor without necessarily reducing the RPM much.

You might be able to use a simple and inexpensive adjustable buck regulator module to reduce the 12V to a suitable voltage for the 'slow' direction, however there is a risk if you switch from fast forward to slow reverse ('plug' the motor) that the motor and gear train inertia would generate enough reverse current to damage the module. A largish Schottky diode on the output of the module would prevent that (parallel reverse-biased), but it still could damage the motor or gear train from the rapid braking.

You can control it all with a center-off DPDT switch. Below is an example. The regulator could be something like an LM2596 if the current rating is suitable. The four optional parts could be added to shut down the regulator when the switch is in the forward or off states- assuming the regulator has an active low enable similar to an LM2596. An LM2596 would be suitable for an actuator with a stall current at 12V of up to several amperes (since you wouldn't be running at the full 12V for the slow direction). 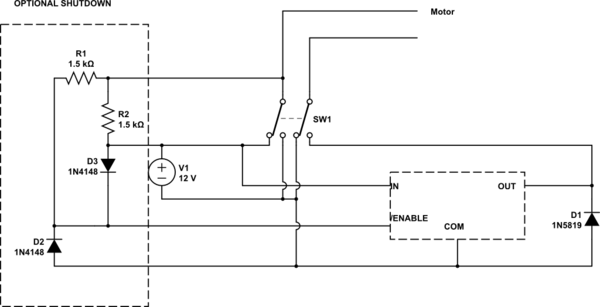 Not the answer you're looking for? Browse other questions tagged resistors 12v or ask your own question.

0
When measuring a resistor with a multimeter does polarity matter?
2
Why is there a resistor in this reverse-polarity-protection circuit?
0
PMOS reverse polarized - 12v light
0
How to reverse polarity on only one device?
0
Make 12v stabilizer for car reverse camera
1
Polarity. What do “C” & “P” signify?
1
Reverse polarity protection on 5-12V input and output