I currently have an Adafruit Ultimate GPS connected to an Arduino that outputing GPS data (nmea sentences) once per second. There is also a pin on the GPS outputting 1 PPS signal.

My question is whether the pulse of the PPS suppose to match the time that the GPS data is coming in i.e are they are coming in at the same time?

Also does PPS pulse come in at the beginning of a UTC second or is it random and simply once a second?

I have not used the Adafruit GPS, but GPS units almost always output the time after the PPS signal has been sent. They do this because the PPS signal is typically tied to the timing of the data stream coming from the satellite (or at least most GPSs have a mode where they are tied). In this case, the PPS is sent at exactly the moment the GPS satellite data stream says a UTC second starts. After that, they process the data, determine what time it actually was, and relay that data.

Some GPS have other modes where the PPS does not occur exactly at the top of a UTC second (which is helpful if you want to use the PPS signal before you have a GPS feed), but those that I have seen typically default to the PPS occurring at the top of the second.

If you need to know the time of the PPS, you need to latch an internal timer when the PPS signal occurs, then associate that with the data from the GPS when it comes in. Alternatively, keep track of the GPS data and, when the PPS is asserted, you can assume that it is now most_recent_gps_time_utc + 1 second.

I have a Dragino Lora/GPS Shield, which is based on the MT3339 chipset also used in the Adafruit Ultimate GPS Module. I did a couple of experiments with this shield in order to answer this very same questions. My conclusions are in line with the previous answers, namely:

Here is what I did: 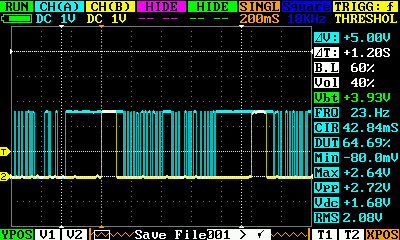 The yellow trace is the PPS signal. It's high for about 100 ms every second. The cyan trace is TX. This trace shows the serial data is sent in bursts, with each burst starting shortly after the falling edge of the PPS signal.

The hardware setup was:

The Arduino was used just as a serial/USB gateway (TX of GPS connected to TX of Arduino, which runs a “do nothing” program). The laptop was synchronised to within a few milliseconds of UTC via NTP. I used the following Node.js program for logging timestamped serial data:

The output of the program looks like this (comments added):

There is no way to accurately output a message at a given time. The accuracy is given by the pulse, the message completes all the needed data (day, hours, minutes, etc.)

But the accurate time signal is the PPS signal itself

The serial data is not sent at the exact instant the PPS pin goes high, but you need to wait a few milliseconds to get the full set of NMEA sentences anyway. Using the default sentence settings and baud rate, I got an average of 348 bytes/s, which with a baud rate of 9600 (9600 bits/second) would take 290 milliseconds to send. So, as Cort says, each rising edge of the PPS pin occurs at "most_recent_gps_time_utc + 1 second".

The GPS gathers satellite data while sending a PPS pulse at UTC second X. It does the necessary calculations, then outputs the NMEA sentences for the position at second X, therefore the GPS data for second X is always received a few hundred milliseconds after the PPS pulse for second X.

The manual for the receiver used on that Adafruit board is pretty bad. I randomly selected a trimble based one on sparkfun and at least for that module it was a bit better. first and foremost for the trimble one you select positive edge or negative edge, so you need to know from the one you are using which edge is the correct edge (if it is a short pulse, not a 50% duty cycle, from a scope it is hopefully obvious the leading edge of the short pulse is likely the edge you want).

The only other clue we get from the trimble manual (again not the one you have is):

Once time is acquired, on the next PPS add 1 to the whole second to read the correct time.

Which for that unit means the time you get from the nmea string and then on the next pulse you add one second. I would not assume that this is true for all of them but it makes sense. It implies that for this one the pulse is related to the string that is coming out or about to. by then it is too late of course.

Of course no reason why you couldnt have found this information yourself, another brand unit says that Each message is output within a few hundred ms after the 1PPS pulse is output and tells the time of the pulse that just occurred. So basically the same as the trimble add one second to the time you just read when you get a pulse. This other brand is a rising edge doesnt sound like you have control over that.

You also need to understand how your signal is recived by hardware, for example if they are using an optoisolator or some other form of isolation it may invert the signal so it may go out the receiver one way but enter your chip the other. With your arduino it is hardwired no isolation you get what you get.

A scope should make all of this obvious, put both the serial tx and the 1pps on the scope ideally you see the 1pps leading edge and then after that see the burst of serial messages. That one picture should tell the whole story.

My small contribution here. To double check this, I wrote a bit of code (available here: https://github.com/jerabaul29/interrupt_GPS_synchronization/tree/master/PPS_clock_signal ) that basically:

The results are following, and correspond to what the other answers have been describing:

This is one more hint that, similar to what the other answers suggest:

This is one more hint that for each given second, one first observes the rising PPS, and then after a while (due to processing / finite serial speed) the NMEA sentences for this UTC second are received.

Not the answer you're looking for? Browse other questions tagged gps or ask your own question.