I'm using a STP16NF06L mosfet to drive a pump (12V / 3A). The problem is: there is only 5V at the pump (so 7V voltage drop at the mosfet), and because of that the mosfet becomes instantly hot. I'm driving the mosfet with the raspberry pi through an optocoupler. 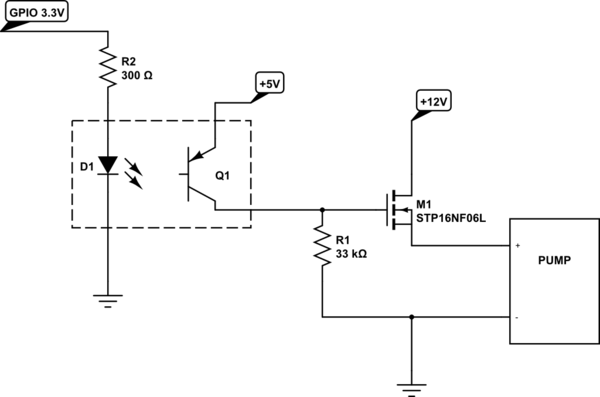 I have measured 5V between mosfet gate and ground, I think it should be fully on.

You are trying to use an N-channel MOSFET for a high-side switch, and you are not turning it on, because you are not driving the gate correctly.

For the MOSFET to turn on, the gate should be a certain voltage (VGS)about MOSFET's source. If the source itself is at some positive voltage, then the VGS has to be on top of that voltage. Imagine that you want to have +12V at the positive terminal of the pump, and you want to drive the gate with VGS=5V. Then the gate voltage with respect to ground would have to be +17V. You don't have a high enough supply rail in your circuit for that.

How to explain the power dissipation which was observed? When you try to turn the MOSFET on, the voltage at the positive terminal of the pump was somewhere between 0V and +5V. There is still enough voltage to turn on the MOSFET partially. As a result, there is still some current flowing though it, and there is a voltage drop across it. It can't turn on fully, and it can't turn off fully.

Options to fix this:

Your problem is that you're using an N-channel MOSFET as a high-side switch. This is not recommended. Provided your pump doesn't need to be connected to the +12V ground, the correct configuration for your STP16NF06L as a low-side switch would be: 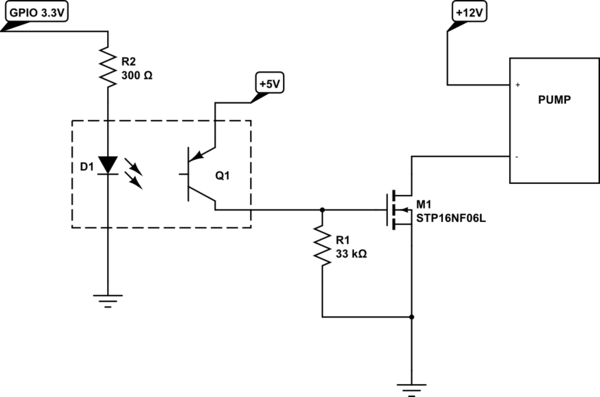 Not the answer you're looking for? Browse other questions tagged mosfet raspberry-pi opto-isolator or ask your own question.