I'm trying to make a circuit that measures continuous voltage and current of a power supply, so I'm controlling the load applied to it using a MOSFET controlled in a closed feedback loop. By varying the PWM duty cycle, that passes through a low pass filter (making a DAC), I can control the amount of load.

Does anyone have a guess of what could be happening and how can I solve this problem?

as show in the figure below: 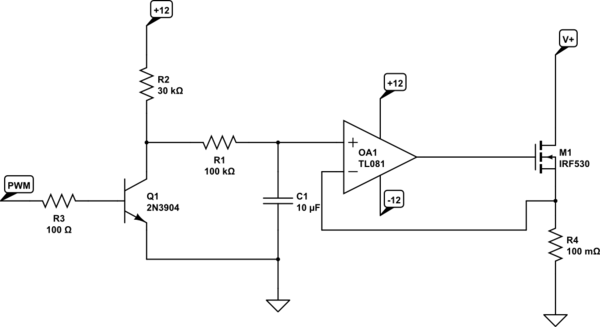 The way these "electronic load" circuits are typically designed is to dissipate almost all of the power in the MOSFET and use the source resistor (your R4) in a current sensing role. Typically R4 would be 1Ω or 0.1Ω.

So, as WhatRoughBeast mentions, a heatsink is really a necessity, unless your current is in the small 10s of mA, and perhaps even then depending on the output voltage of the supply under test (which corresponds closely to the voltage drop across the MOSFET when R4 is low).

A large-ish resistor in the current sense role adds gain to the feedback loop (increases the loop gain), which moves the feedback circuit toward instability. Combined with the gate capacitance of the MOSFET, I'll be surprised if it's not oscillating already, even before paralleling a second MOSFET. Generally these electronic loads require compensation of the op amp circuit in order to be reliably stable. In any case, a large-ish R4 will make things worse, not better.

The typical way to increase capacity is to parallel the entire op amp MOSFET pair, going back at least to the non-inverting input. Due to the high impedance input of the op amp, I imagine one low-pass filter will serve just fine for two paralleled "load" stages.

But if the power you need to dissipate is under say 25 Watts, you can handle that with a heatsink and perhaps a fan for some active cooling.

If you really wanted to dissipate power in a resistor, you could place it ahead of the MOSFET. You'll still need a current sense resistor of course. Also, this limits the flexibility somewhat as far as the maximum current draw, but might be an idea worth exploring.

It's not a problem, it's the way the circuit works. Keep in mind that, when operating properly with negative feedback, the + and - inputs are essentially at the same voltage.

Your attempt to parallel 2 FETs was not horribly wrong, but different FETs have different gains for the same gate voltage, so one of the FETs is hogging most of the current, but in effect the gain of the composite FET varies with gate voltage, since if one FET is on and the gate voltage rises above the turn-on threshold for the other the amount of current will increase dramatically. This gain nonlinearity, combined with the capacitive loading on the op amp due to gate capacitance, is causing your op amp to become at least slightly unstable. This is made worse by high-frequency components of your PWM getting past the cap.

You are best off sticking with one FET, and putting a heatsink on it. You should also check the voltage across R4, and make sure that your op amp/FET is not oscillating, which will draw significantly more power than if it is well-behaved. 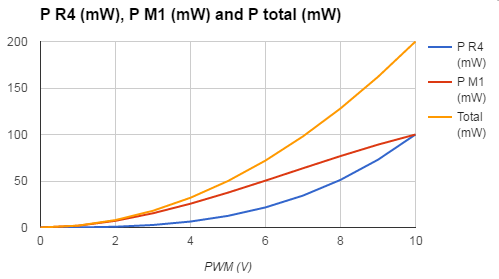 Figure 2. Graph of power in R4 and M1 vs PWM voltage. Note that for the range selected M1 dissipates more power than R4 as it is dropping more voltage. If we continued the chart X-axis up to 20 V PM1 would drop back to zero as the voltage across it reduces.

Does anyone have a guess of what could be happening and how can I solve this problem?

I don't understand what you have done with the second MOSFET but if you are referring to the heat dissipation problem then you have to realise that the combination of M1 and R4 is your test load - not just R4. The circuit is working and you need to cool M1 adequately.

Not the answer you're looking for? Browse other questions tagged power-supply mosfet control or ask your own question.