Edited: Purpose of this solution is to power on/off remote application which dose not have a UPS or power backup. I am using Arduino with Ethernet module to remotely on/off system power but the problem during long power outage.. application shutdown and i am needed to power on it again.. I looking for a Solution to store state of application even if power reset.

Offhand, I'd say that an EEPROM is the obvious solution for this kind of thing. They store state even in the face of a total power failure. They're fairly inexpensive, as little as $0.29 each in small quantities (ex: https://www.jameco.com/z/24C01-Major-Brands-2-Wire-Serial-EEPROM-1K-128-x-8-DIP-8_276592.html). The biggest downside is that it means adding extra circuitry to the system, to read/write the EEPROM. I'm pretty sure you could get by without adding a full fledged micro-controller, but it would definitely require at least a few extra components.

Using an SD card could also be an option, but I think this would be even more complicated and more expensive, which might make it less than ideal.

A latching relay is designed for this very purpose.

"A latching relay is a two-position electrically-actuated switch. It is controlled by two momentary-acting switches or sensors, one that 'sets' the relay, and the other 'resets' the relay. The latching relay maintains its position after the actuating switch has been released, so it performs a basic memory function."

Unlike ordinary relays the latching relay has two sets of coils which move the contacts into one of two positions. In a power outrage they stay in the last position set.

A simple toggle circuit could be used to enable the use of a single push switch to operate both coils (first push ON (coil 1), second push OFF(coil 2))

I have application which need a push button on/off switch feature. But i need to do something buy which it can remember or store in memory the previous status after power failure. 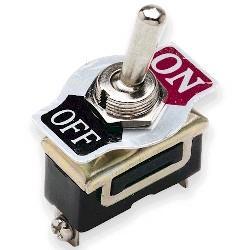 A toggle switch, instead of a push-button switch, meets all your stated requirements and more.

Figure 1. The Digital Loggers series of devices is an example of a web-controlled power switch (for the North American market).

There are a range of devices which perform the functions you require. These are used in a variety of applications such as server rooms where they are particularly useful in forcing a reset of an unresponsive device by cycling the power. The device above has switched and unswitched sockets and power status memory.

Search for "web-controlled power switch" and you should find something suitable for your country (India) at a good price.

Maybe your Arduino version has a "brown-out" detection feature, as some others microcontrollers do. In which case, an interruption would be fired, so in your ISR you could store that event and more data, from where to read when the Arduino boots up again. Regards.

Arduino Uno has 1KB of EEPROM which is prety enough to store status of 1024 devices.

There is no need to use external EEPROM for this.

Here is the link to examples and tutorials.

I suggest you to write the code in a such a way to execute minimum read/write operation from EEPROM, since EEPROM has a life time depend on number of read/write cycles.

Not the answer you're looking for? Browse other questions tagged integrated-circuit relay memory or ask your own question.

1
Raspberry Pi high voltage supply soft-off circuit
11
Can a relay failure mode be like that?
0
Relay before or after power supply
3
RTC Power Switch for Raspberry Pi
1
car Ignition switch relay maintain closed after remove power
1
DIY Computer UPS - Smoothing DPDT Relay 80ms Cutover
0
Is there such a thing as a fail-safe, low-power relay?
0
Controlling a motorized ball valve and appliance with a float switch(es)