I am working on a clone of a Vox guitar amp and wanted to use thermal flow simulation to assess the 60's cab design and orientation of the amp chassis.

In the particular Vox amp the tubes face down (like many amps) inside the amp head. I am not sure how to apply a heat source value for the tubes/filter caps etc in the chassis. I can input a solid or surface value as a temp or in Watts.

The flow simulation should show if the heat convection to the components in the chassis is better or worse depending on its orientation, which is the aim of the study.

Some people have added fans to their old amps as they have a concern about heat, and some swear that the hotter an amp runs the better it sounds. However there must be an ideal temp range or at least max that tubes and capacitors should run at before their life span is dramatically reduced.

I can also use the simulation to see if adding a fan will improve the air flow and therefore heat dissipation.

There is also transfer of heat through the chassis from the tubes to other components on the turret board and I have often wondered if the chassis is better off in an 'upright' config whereby the heat from the tube rises up and out of the head, without passing over the rest of the components as apposed to the 'upside down' config. Although in the amp I want to build the chassis would dissipate heat, however I have seen pics of this amp where it clearly has become so hot it has darkened the chassis around the tube sockets, (see photo below).

I am unsure what temp to apply to the various components as Heat Sources in the simulation.

As an e.g. in a typical push-pull amp, the maximum plate dissipation of is 30 watts plus about six watts for the filament and a couple for the screen so I could model a total as 40 watts. The temp runs around 400 degrees F for a tube. Is there a direct relationship between the dissipation in Watts and the Temp of the tube under normal operation?

An amplifier like this is about 50% efficient (or a little less) should I double the rated output to be somewhat in the ball park of the power (and heat in watts) as input to the amplifier.

Of course, after a few hours, the transformers get hot along with everything else including the capacitors and resistors in the circuit.

My schematic also shows the input V at the tubes after the first V drop resistor and the Voltages at the Cathodes of each tube.

Thus with all that said, do I have enough info to set up a Flow Sim study in Solidworks to assess the best chassis orientation, cab ventilation and need for a fan??

PS Here is a partially completed model of the amp. Only 3 filter caps shown so far. Most of the other caps are on the turret board and actually soldered above a resistor 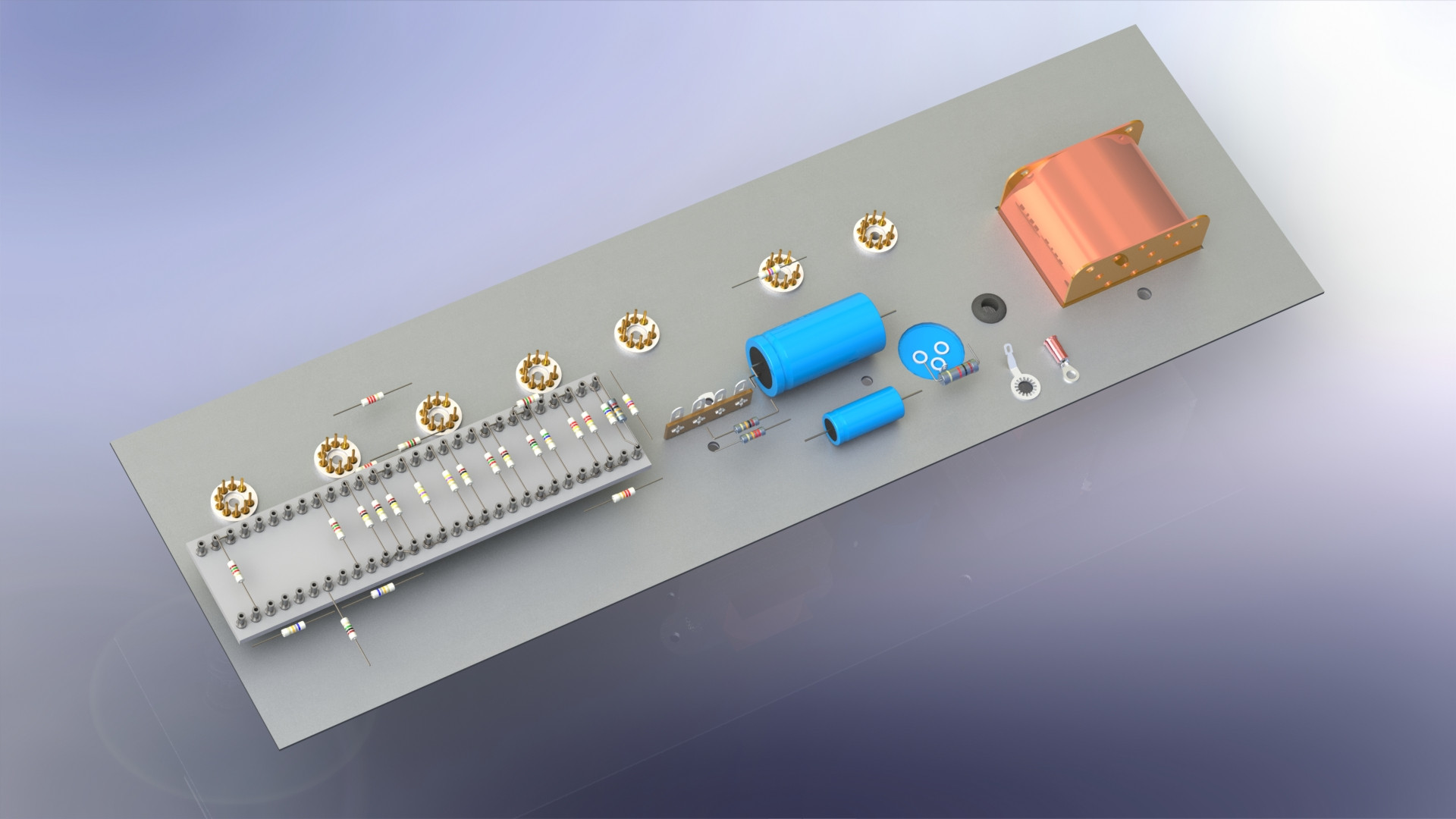 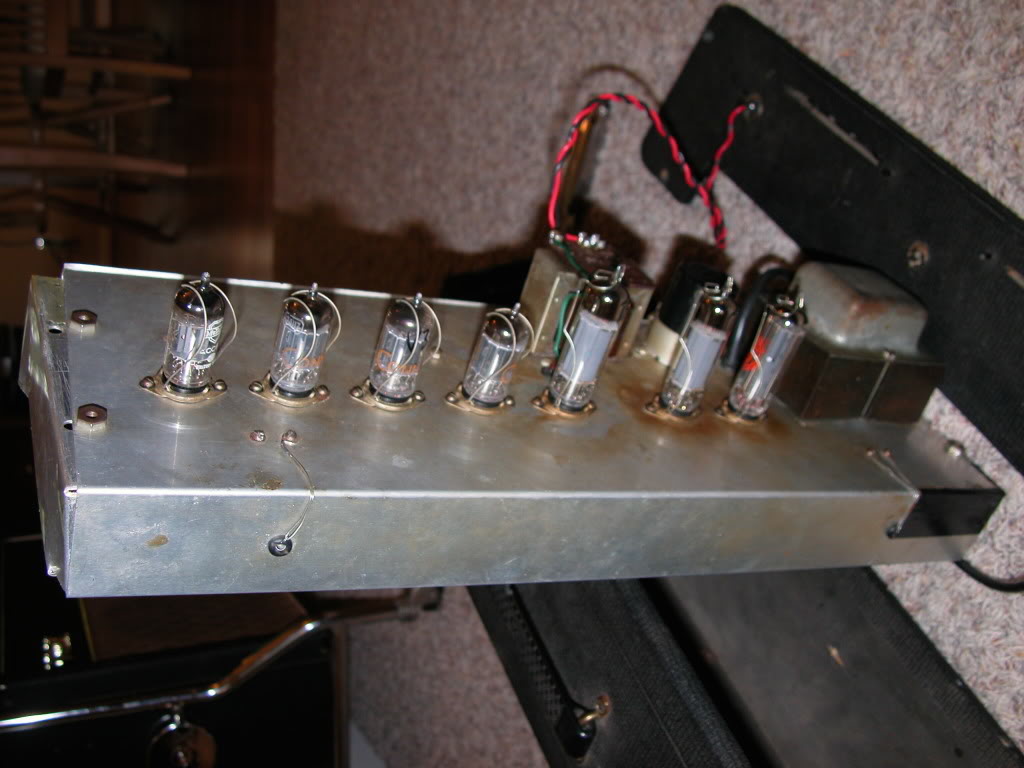 Ok, if you want to be a little more meticulous.

Assuming this is a classic AB tube amp, it should run around 70% of its plate dissipation in quiescence and about 100% on average when the full signal is applied.

Preamp tubes usually draw constant average current of about 3mA per envelope (assuming 12AX7), and you can roughly estimate total plate+plate load resistors dissipation from there. Consult the anode curves for particular bias modes. I believe this figure should be around .75W per envelope.

The rectifier dissipation can be estimated from the maximum anode current (for safety) and the internal resistance of the rectifier (from the datasheet curves) or from observed voltage drop. I got about 10W which conforms with my experience that rectifier tubes are usually really hot.

Don't forget to add filament power as all of it is converted to heat.

Output transformers do not usually heat up if they are of any quality. Power transformers usually heat up to 80-90F above ambiance. You can estimate power figure if you know the type of the core used - usually it has a specific W/kg at given Tesla rating. You can assume the induction to be 1.5T (common for commercial trannies). Add resistive losses of the windigns as well.

P.S. Whatever results you get - do NOT mount tubes horizontally - stick to upright/upside-down variants only.

P.P.S. On a more general note, I have seen amps that fried their electrolytic caps which were situated way to close to output or rectifier tubes. I have never seen the heat do any other kind of damage.

Not the answer you're looking for? Browse other questions tagged amplifier vacuum-tube or ask your own question.