I have an experiment composed of 16 strain gages, mounted on a steal beam. The steal beam is horizontally placed under a compression cylinder for a stress test. the test took around two hours to complete and composed of different stages and levels, the maximum load achieved on the was of 160KN. The stress machine is a YLE compression machine with National instruments PXI modules for data acquisition

After retrieving the measurement results, most of the gages have stopped changing in value and become somehow saturated as shown in figure 1 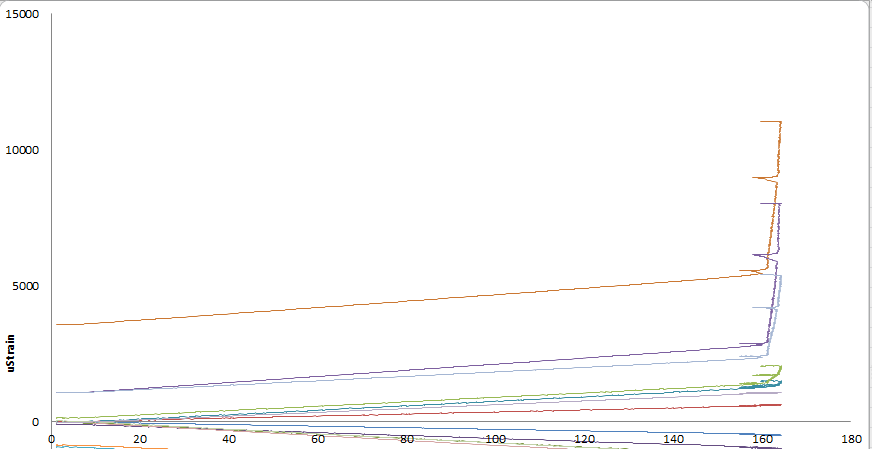 while the remaining strain gages did not preserve a linear variation, the installation used a quarter bridge and the results were calibrated at the start.

So the questions are: - How did the strain gages get saturated? and how to choose the best strain gage? -what are the causing errors/noise which can cause such behavior? Does the amplifier gain limits affects the resulting values? if so why didn't it affect all of them? -what are the most common errors and noise generated when installing and using strain gages (the strain gages where soldered to a 10m shielded cable and connected to the machines inputs)

It seems to me that there are a few problems.

The first and last points make it appear that the setup is mechanically faulty, that the load is not balanced between the cells and some leverage is occurring causing some gauges to go into tension. This will put further stress on the sensors in the pivot area - probably 1, 2 and 3.

Which gage series, exactly, are you using? Most of the series listed in the doc you point to have a max strain of 1.5 or 2%, but the EP series goes to +/-20%. You might try using that one, if the saturation is mechanical. If you've over-strained the devices, I don't know that they're still reliable.

A quarter bridge, I assume, is just a constant current running through your gage. If the saturation is because of the current supply reaching its voltage limit, you could try turning down the current through the strain gage.

The strain gauges have not saturated, actualy the metal body on which the gauges were applicated has bent. According to Hook's law you entered in a region of no return, causing a plastic deformation of the body.

Not the answer you're looking for? Browse other questions tagged resistance measurement voltage-measurement diff-amp strain-gage or ask your own question.