Recently I bought an Arduino Uno to discover electronics. I am a computer science student, hence the programming part is not a problem, however, I lack some knowledge about electronics.

Now I want to do some simple home automation, mainly to control the lights in my house. I was thinking about adding an Arduino controlled relay (in the central electrical box of my house) for each light I want to control.

However, for each light in my house I have a switch. Suppose, I'd add Arduino controlled relays in series with the switch (as in the figure below):

The problem is that with the relays being in series, I can only switch on and off the light if the switch is closed. Hence, like above, the switch is open and my Arduino controlled relay will have no effect.

Now, suppose I'd add the Arduino controlled relays in parallel: 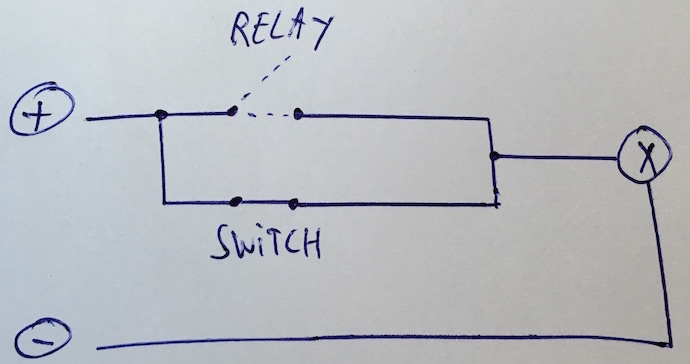 How does one tackle this problem in home automation systems, without the need to rewire my entire house?

PS : Excuse me if the diagrams are wrong in some way. I absolutely have no electronics background.

How does one tackle this problem in home automation systems, without the need to rewire my entire house?

Well, you can't avoid a bit of rewiring. The circuit you need is this: -

Either switch (relay or manual switch) can reverse the situation and fully control the light. I might also add that you cannot know whether your relay has activated the light or deactivated it. However, if you sensed current you could determine if the lamp had turned on providing the lamp is working. Call it extra functionality if you want.

An alternative way of wiring it is like this: -

Functionally it behaves as an exclusive-or gate.

If you want to add a relay to an existing installation that already does this you need a 2 pole changeover like this one shown in the middle: - 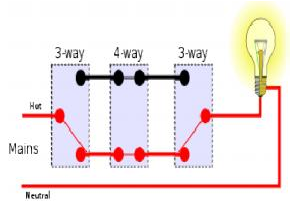 In fact you can continue to add 2 pole changeover switches to your heart's content to give you the same functionality but controlled from multiple positions.

You have identified some of the problems with this type of project. Andy has shown how a two-way switch circuit is wired but that will involve extensive rewiring of the house.

I caution anyone looking at doing Arduino home automation.

My advice is to have a look at the wireless options and see if you can do this in the ceiling fitting, etc., rather than at the fusebox.

Figure 1. By careful choice of components a system can be fitted with minimum disruption to existing wiring and decor. In this example the wall switch is jumpered out and removed. A wireless push-button fitting is mounted in its place. It will be battery powered but battery is used momentarily on each button press. The ceiling fitting is replaced with the wireless receiver and control switch. This can now be controlled by the wall switch, a handheld remote or the home automation controller via your mobile phone or pad. The original switches and ceiling fittings can be replaced when moving house.

Have a look at the OpenHAB, 'a vendor and technology agnostic open source automation software for your home' where they have worked out protocols for a huge variety of commercially available and open-source DIY control devices. They have a Java based back-end that will run on anything from a Raspberry Pi to an industrial hardened PC with scheduling and mobile phone GUI.

Figure 2. The Android OpenHAB UI. IOS is available too.

Not the answer you're looking for? Browse other questions tagged arduino home-automation or ask your own question.

4
Home Automation using Arduino and Android
14
Any obvious problems with this DIY home automation?
4
Control the lights both with wall switch and arduino
0
Relay stays triggered (latched) with 2 sec interval, 50% duty cycle signal
0
How to monitor switch state?
0
Relay parallel to wall switch: Is it safe?