What are some reasons my atmega32u4 loses program when disconnected from power?

I have two different boards running the same code with the same chip (ATMega32u4).

THe problem is that the 2nd board seems to lose the program that has been flashed to the chip if it loses power.

Both of these boards have mini USB connectors and get power from USB and both run at 5v.

The first board is an "official" SparkFun Pro Micro. 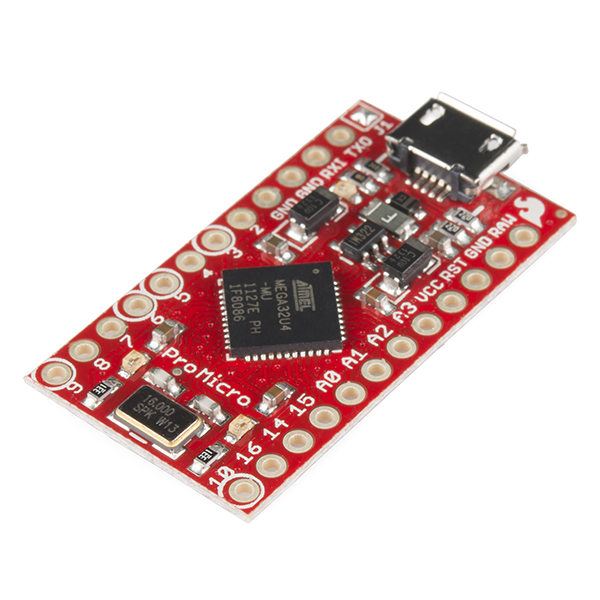 The second board is a knock-off of that board which I bought on amazon. You can see the details for that board at: Pro Micro knock-off board at amazon

NOTE: I'm not expecting anyone to examine those boards perfectly and tell me the exact reason why. I'm just adding that info in case someone notices something completely different that would indicate the problem.

When I program the boards I set the Arduino IDE to the Pro Micro board at 5v and 16Mhz and the program flashing works equally well on both boards. I then run the knock-off board and it works perfectly. It's a little program that receives data from bluetooth and displays the data elsewhere.

On the first board, I programmed it once weeks ago and it works after being powered off for days. Obviously, that's the way it is supposed to work.

On the second board, if it loses power at all it seems to lose the program.

I'm just wondering if there are some common things I can check to determine why the program seems to be lost.

Are there any obvious things that I'm just missing? Is it possible the manufacturer hasn't wired something up properly which would cause this --- I mean is this common problem with board manufacturing? I have 5 of these knock-off boards and have tested two so far and both seem to have the problem.

I found the following information in a review on Amazon:

So the issue can be worked around by wiring a button to the RST pin and hitting the button every time you plug in the Pro Micro so that it will reset and run the sketch. It's annoying that the issue exists, but at least it's workable.

Can anyone explain this phenomena?

Yes, the bootloader installed simply waits for a new sketch indefinitely, without timing out and entering the existing one after a certain period.

Might there be another workaround that is an automated solution-- versus pushing a button each time?

Install a new bootloader. I have a sketch described on my page about burning bootloaders which installs the Leonardo bootloader. I think the Pro Micro bootloader is similar or identical (it is the same chip after all).

You just need a second board (your other Micro would do) to use for the programming. Wiring for a Leonardo is described on my page - however see below for the Micro. The code is at Arduino sketches on GitHub - in particular in the "Atmega_Board_Programmer" directory.

You need to connect together the two boards as follows: 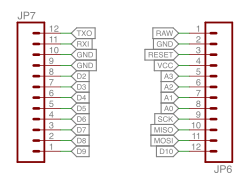 Possibly (probably) after installing the bootloader the board will identify itself to your PC as a Leonardo and not a Micro, but that doesn't matter since it is the same underlying chip.

Well, the atmega MCUs are flash-based, so they should never 'lose the program' without an explicit erase cycle. However, it's possible something is preventing the chip from starting your program. Have you tried reading out the program stored on the chip after power-cycling the board and comparing it to the original? If it matches, this will rule out the program getting 'lost'. That leaves a couple of possibilities. One is a problem with the reset circuitry that prevents the chip from exiting reset until the USB cable is connected and the programming software is started. Another possible problem is that the chip has a bad bootloader installed on it that doesn't automatically start the user code. That could be a pretty simple fix, just flash the correct bootloader using an ISP programmer or another board that's configured to act as an ISP programmer. Another possibility is the chip itself is a knockoff...in which case all bets are off.

I have a usbasp programmer so after I read @nick-gammon's great answer and it sounded like I just needed to flash a new bootloader onto my knock-off boards I wanted to try it.

I did not exactly know what I needed to do, so I decided I must go and do it quickly.

At first I browsed around @nick-gammon's great web site and I found the leonardo bootloader, but I could tell it wasn't a straight up .hex file so when I tried it and got an error I figured it wasn't going to work for my setup.

First of all I have a 10 pin connector on my usbasp programmer which looks like the following: 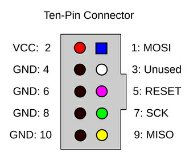 Here's what my hardware wiring looks like on the knock-off board. It's an ugly picture but I've labeled it at least. 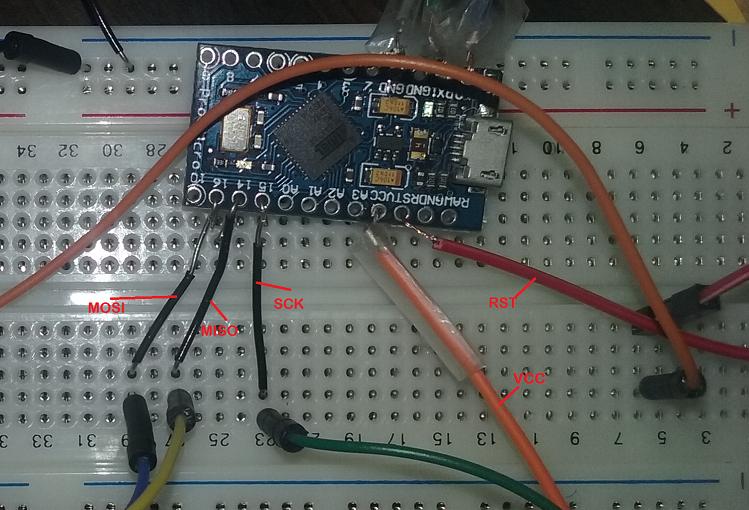 A couple of things to note are that @nick-gammon mentioned that D10 would be the reset, but in my case it is not. Instead you can see that my reset line was connected to the RST pin on the board which is just above the VCC. And yes the colors on the wires are extremely confusing for the VCC and the RST but the labels are correct.

Getting the Bootloader Hex File As I had mentioned in my original question, I was wanting to get these knock-off boards to work just like my original (more expensive) SparkFun Pro Micro. I checked out the sparkfun site and they provide the bootloader that they used. That's very nice and I got lucky I could get it. You can get it at: https://www.sparkfun.com/products/12640 and then click the Arduino Addon Files link. You'll get a zip file and then you can unzip it and look in the \sparkfun\avr\bootloaders\caterina\ folder and you'll find a .hex file named: caterina-promicro16.hex. I was totally guessing that this would be the bootloader file. 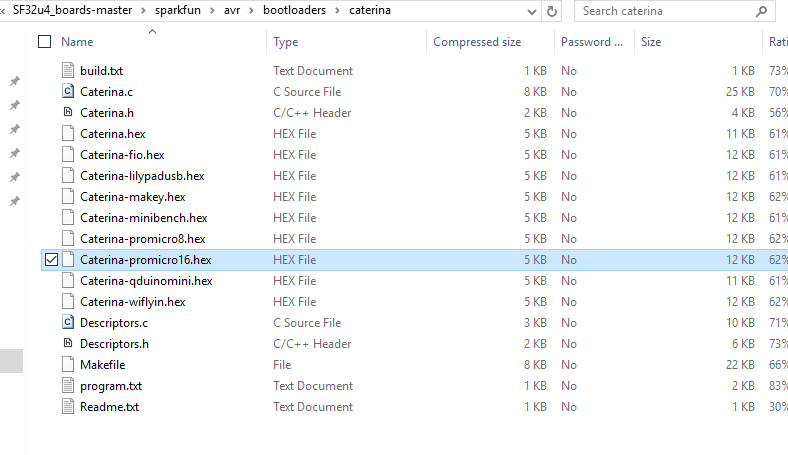 After all of that, I went to the command line and fired up AVRDude. I gave it the following command (making sure you have the caterina-promicro16.hex file available in the same directory, of course).

If everything is wired correctly then you'll see the following as the bootloader is flashed into your ATMega32u4. 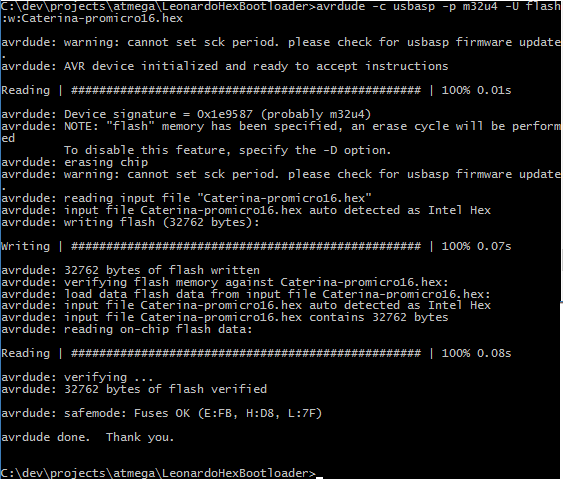 When I saw all of that I was psyched! But, I still couldn't be sure that this was going to solve my problem. To do that I had to open up Arduino IDE and flash in my original program.

I went ahead and did that and tested the program. It worked.

After that, I needed to unplug the knock-off board and see if it would lose the program -- or actually if it would just loaded it as it should. I tried it and it worked great so I unplugged it a few times and it worked every time. My program is always running now as I hoped it would be.

Also, I bought 5 of these knock-off boards and I'm bootloading them -- two done so far and both work fantastically.

Thanks for all your help @nick-gammon.

Yes I noticed similar issue with my old AT89s52 Boards some times the development board acts dead and works again after a reset.

I am not sure but the power supply might contains some spike voltage or some noises which might cause MCU to act dead may be this happens because capacitors can not filter those spikes in the beginning using a well regulated (high quality adaptors) may solve the issue and also use some IPA and clean the entire board.

As other friends suggested try with bootloader stuff too.

Not the answer you're looking for? Browse other questions tagged arduino atmega embedded flash atmel or ask your own question.

1
Replacing atmega8 with atmega328(arduino)
5
Transmission (TX) halts using FTDI 232RL with ATmega328-PU
0
Arduino as ISP programming the Arduino, not the connected ATmega328P
1
Arduino fingerprint sensor turning computer on/off
0
MCU freezes when power disconnected from attached HMI
0
Can an ATMega328p be bricked such that it cannot be programmed but still works?