I'm designing a battery charger, and I need to discharge every cell of a LiPo battery on its own at some point using a discharge resistor ( cell balancing ) by controlling switches from a uC, one way would be using a relay or an optocoupler that would be completely isolated from the signal side, but optocouplers usually dont handle much current and i would need to add another transistor stage to handle that, same applies to a relay but in the other way, a uC cant source/sink enough current to switch the relay which again means an extra transistor stage is needed ( plus the diode )

But what about a transistor on its own ? would it work like that ? 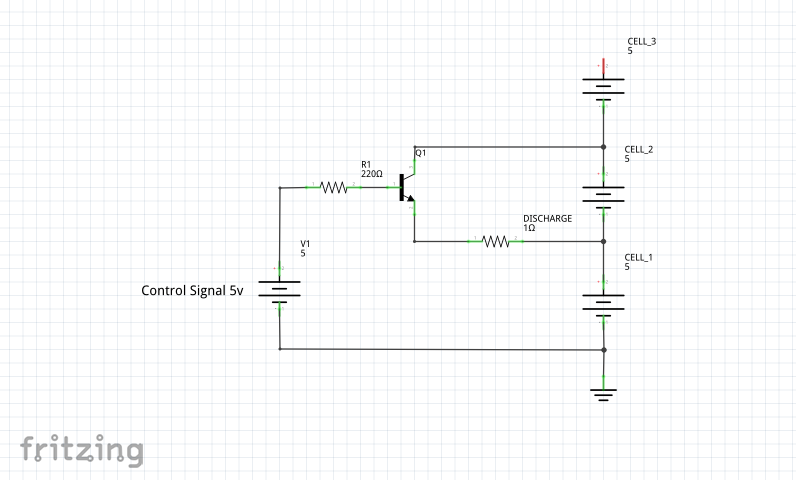 There has to be a current path for the signal to go through which is normally done by connecting both grounds, but doing that here would short the cells since every cell would have a transistor on it controlled by the same uC ( every neg cell lead would be connected to the same uC control gnd thus shorting everything )

Can the control signal find a return path through the cells assuming the transistor can handle the volatge of the cells combined ?

not sure if this is the right title for the question.

A former colleague of mine had devised an efficient way to solve the cell balance issue by transferring charge from one cell to another by switching capacitors. You'd probably want to add some current limiting to avoid excess currents between the capacitor and battery cells that would either present a hazard to the battery in the absence of a safety circuit or result in blowing fuses or tripping safety circuits in the presence of a safety circuit. The idea is patented and can be found here https://www.google.com/patents/US6624612 so you would need to be mindful if using this technique in a commercial setting.

If you're just looking to get the job done, I'd recommend purchasing an off the shelf multi cell battery management solution. TI, Linear Tech and others make silicon for these applications. Their solutions often also include safety and fuel gauging built in. http://www.ti.com/lsds/ti/power-management/battery-monitor-protection-and-authentication-solutions-overview.page