Detect a Change in Duty Cycle

Could someone have a look at this scope trace?

This is a signal from an internal clock in a piece of gear I have no schematics for.

I need to be able to use that short 100% pulse to flash an LED, but I'm honestly not sure where to start. Is it something that could be done w/ logic gates, 555, etc? Or is a micro-controller the better choice? Any solution has to be near zero latency, this is a music application, the "pulses" superimposed on that signal are 1/4 notes.
Thanks kindly for any insight on this.

EDIT 09/08/16- I want to thank all who provided feedback/advice below. I've been at this hard for a week or so. Upon further experimentation, I've realized that this is not simply a duty-cycle modulation. This particular digital signal is apparently used by multiple functions within the unit I wanted to modify. The signal changes in too many different ways when other functions are enabled, to simply isolate that one "event" I describe above. Without a schematic and source code for the mcu that is generating the signal, I don't see any way to interpret that signal, even w/ another mcu. The gentleman who designed the hardware is not longer alive, so I don't hold out much hope for obtaining a schematic/source code. Thanks again for your help.

Those pulse width changes are so slow, that I think I can see them happening on a video. That suggests they may last more than one field time. I.e. they last, maybe 1/25th or 1/30th of a second. That might take several cycles (as the cycle appears to be 10ms).

My 'knee jerk' is to use small microcontroller (e.g. an ATtiny85, like a digispark). I would tend to choose this path because it is a time-based signal, which may have more variability than the scope shows, and so may need some flexibility in how it is treated. Something which can use an Arduino IDE is likely to have some other people who can help you when you get stuck.

Also, though there appears to be a single input signal and one output, an LED, you might think of other things which you'd like to observe. An an MCU is handy for this.

I believe reaction time better than 1/20th of a second is unusual, so that might be 'instantaneous' enough, though I am willing to be corrected when it comes to music.

If you have a bit more money to spare, I'd probably use an ordinary Arduino, as it can talk to the host PC, which would help with testing and debugging.

The video you pointed to looks more like the oscilloscope is missing a trigger now and then. If you pause the video at the right moment (it may take a few tries but it is not hard to do) you'll see the same 80%-20% square wave, only shifted to the left. A moment later it is back to the original position.

Anyway, assuming you do have a change in duty cycle and only want to detect between two possible values, you could use a simple integrator + comparator like the one below: 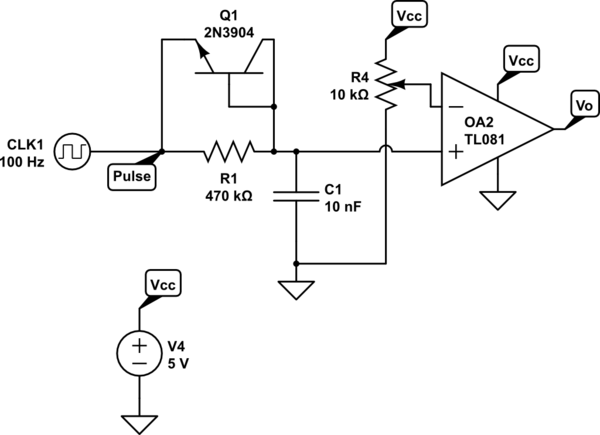 Of course a microcontroller will give you much more flexibility but it is more complex to make it work.

6
IIR filter on a 16bit MCU (PIC24F)
5
Frequency multiply a digital signal using pure digital ciruitry (i.e. without PLL)?
0
Maximum clock frequency for multi-cycle vs pipeline
1
Generating a PWM ramp signal using logic gates
0
32 Bit Increment Circuit and Verilog Program
2
NAND Gate Logic Optimization
0
The logic schematic which can change the duty cycle of input
1
How to get a 24 V signal generated when the input circuit state changes?
0
Digital regulator for DCM Boost - How does it relate to duty cycle?