Let's say we have one 74HC595 and we want to light 16 leds (common anode) connected as a 4x4 matrix exactly as in the following picture : 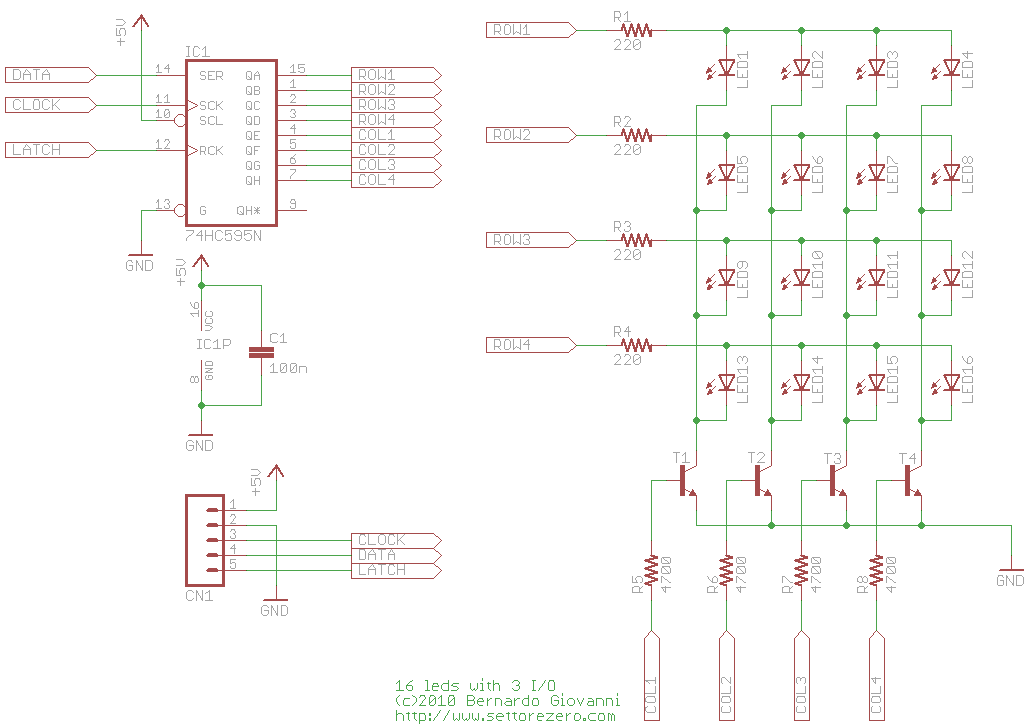 From what I understand at this moment:

In the picture, there is a NPN transistor on the 4 columns to allow more current than what the 595 can sink.

Let's say only ROW1 is active, and all columns are active (LED1,LED2,LED3,LED4). Column 1, Column 2, Column 3 and Column 4 on the 595 will indicates a very low current, just the current set at the base of each transistor by the base current limiting resistor.

If it's the case, in my case, there is much more 595 and much more leds and I don't want to operate near/over the 595 maximum current (75mA), would I simply add appropriate PNP transistors + base resistors to each ROW to reduce the current of each 595 rows pins ?

I want to keep the 74HC595 IC and low-cost single transistors. I know there are shift registers with higher current capacity and transistors-arrays IC that saves wires and resistors. Also that I can reduce the current of each led with higher resistors to keep it under 75mA, but I would like to understand how to properly work with a matrix arrangement that needs more than what the 595 can work with, using these simple components only.

You can do it the way you suggest, however you should move the resistors to the NPN collectors, and you will need PNP (or emitter-follower NPN) transistors on each row output.

You are proposing to do the multiplexing on a row basis, where 0 to 4 of the LEDs in a row are on at the same time. As you point out, the current required from the '595 ROW pins becomes excessive. I don't know which LEDs you are using, but a rough estimate is that each takes 15mA, so you have to source 60mA from the '595 (which is well beyond its specification). With this arrangement you also have another problem. Since you have a single current limit resistor per row (R1 for ROW1, etc) as you turn on more LEDs in the row the current through each LED will drop, as will the brightness of each LED.

The correct way to do multiplexing of this type is to do it on a column basis. Only one column will be on at any time, with any number of LEDs in that column turned on. Each ROW pin only has to source enough current for 1 LED, which the '595 is just capable of doing. The combined LED current for the column of up to 60mA is handled by the column transistor (T1, etc). You also have 1 current limit resistor per LED (R1, etc), so the LEDs have constant brightness.

You have probably worked this out already but this is what I propose you configure your LED matrix. Each LED has a resistor therefore guaranteeing each LED get the same current regardless of how many are on. Of course in this configuration the rows have reverse logic to the columns.

I would say yes in my opinion but others might have different suggestions that are just as valid. 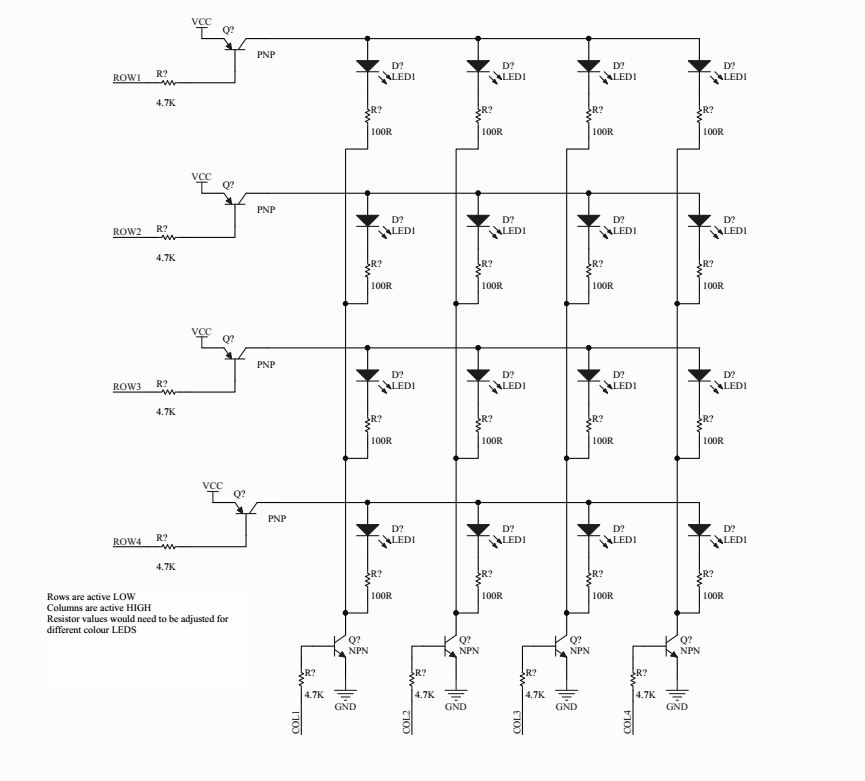 Simon, your calculations are incorrect. The 220 ohm resistor on each 595 output limits current drawn to about 10 mA, no matter how many column LEDs are turned on. I'm assuming that a LED drops about 2.5 v when lit.

As Steve G has noted, turning on another column will simply share that 10 mA between two LEDs - and perhaps not evenly. So your HC595 is safe from overcurrent, but multiple columns will cause dimming. Likely not what you wanted. Be aware that internal Rds of HC595 adds about 40 ohms to each 220 ohm.

Not the answer you're looking for? Browse other questions tagged led npn pnp matrix 74hc595 or ask your own question.

5
arduino 3x3 LED matrix
2
How to switch/power a 13x13 LED Matrix?
2
Chaining limit for shift registers in large led matrix
3
5x7 LED Matrix on a µC without additional parts
3
problem with LED matrix and raspberry pi
5
Why does a 74HC595N work in LED matrices?
2
74HC595 8x16led matrix arduino
0
LEDs are not glowing with same intensity in LED matrix
3
Pressing one key in a button matrix reads all keys in that column
0
Controlling SMD-LEDs using a 74HC595 & NPN-transistor as switch