MIMO: How Can Two Antennas So Close Together Receive Different Signals?

I'm trying to understand how MIMO (as used by 802.11n wi-fi and some upcoming cellular data standards) works in practice. I understand at least the gist of the theory of spatial multiplexing. What I don't get is how it works in practice. Let's say you have two TX antennas ~30 cm apart, two RX antennas ~30 cm apart and the distance between the transmitter and receiver is about 30 meters. The angular separation of the transmit antennas as seen from the receiver is tiny. From the perspective of each RX antenna the two TX antennas are about the same distance away. How is the difference between the signals at the two RX antennas measurable and not buried in noise? I would think that in such a configuration they would be nearly identical.

There are different types of MIMO. Those are Precoding, Spatial multiplexing, and Diversity Coding.

The idea behind MIMO is that at the frequencies being used, the wavelength is small enough that even 30 cm apart is enough to receive the signal at different phases. As Brain said, the wavelength is about 12.5cm for 2.4 GHz. This means that regardless of how far you are from the two antennas, the delay (or phase delay) between the two antennas will always be fixed for any given angle.

You are able to take advantage of this phase difference to create beam steering. The math and actual implementation of this is complex, but the general idea is actually relatively simple. If the two signals are in phase, then you know that the source of that signal is the same distance from each antenna which means that your source has to be somewhere along the line of symmetry. 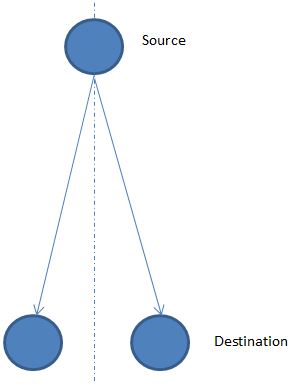 As the source begins to move around, the signal will get to one or the other antennas first and the angle from the receiver can be determined based off of the amount of delay between the two. This then allows you to setup "sectors" or beams based of off how much delay is applied to the incoming signal.

The accuracy of the angle in and out of each pair of antennas is determined by both the spacing of the antenna and the accuracy of electronics to produce and detect a specific phase shift.

Also things get more complex as you start to account for the fact that at some locations the signal might appear to get to the antennas at the same time but are actually 1 full cycle apart. Also there has to be a control system setup to know what direction you should be directing you beam at, especially when you have a moving device.

The big advantage of using MIMO is that you are not creating a lot of extra noise for neighboring devices and so you are able to get more devices in to a small area. Also, since the signal is more directional there is less to bounce off of which results in less issues with multipath.

At 2.4 GHz, the wavelength is about 12.5 cm. So the receive antennas are at different phases of the source signal.

The environment for MIMO does not consist simply of N transmitters and M receivers, it also consists of R reflectors of signal creating multipath signal dispersion. These reflectors between the Tx and Rx, and close to them, consist of things like buildings, walls, trees, filing cabinets, cars, people etc. Any communication that takes place other than on an uninterrupted plain will have various reflectors around causing multipath signals at the receivers.

Multipath creates the effect of there being many received signals from many different directions. As such, once the receive antennae are λ/2 apart, their signals are essentially uncorrelated.

Now that the Rx antennae are uncorrelated, it's possible to create two signals at the Tx such that each Rx antenna receives just one of the signals. This is spatial division multiplexing.

If this sounds fanciful, consider the following. Two signal sources are connected by two coaxial cables to two receivers. Each signal gets received uncontaminated. This is what MIMO is trying to emulate. Now consider that the two cables are leaky, and have crosstalk. The two signals will be contaminated by some of the other signal. If the cables' positions are fixed, then the amount of crosstalk can be measured, then the transmit signals can be matrixed together such that the crosstalk will be removed on reception. If the cables move, then the crosstalk must be remeasured, and new matrices constructed.

The multipath MIMO environment is like a number of very leaky cables. Over a sub-ms time frame, the channel path remains stable enough to be measured, then matrices constructed at Tx and Rx, such that it looks like several independent channels. Error correction allows there to be small changes in the channel gain which result only in a small degradation of the channels, rather that it stopping working.

Consider a MIMO system with two antennas in transmitter and two in receiver and let the channel coefficients be h11, h12, h21, h22. Assume that the transmitter transmits x_1 and x_2 from its antennas 1 and 2 at the same time. The receiver receives two signals in the antennas y_1=h11*x_1+h21*x_2 and y_2=h12*x_1+h_22*x_2 assuming that the system is noise free. Assuming that the channel coefficients have been obtained at the receiver using prior pilot signals, we can extract x_1 and x_2, transmitted by the transmitter, if these two equations are independent. That would be possible if the channel coefficients are uncorrelated. The antennas are to be spaced apart to get this. Then the MIMO system is said to have achieved spatial multiplexing. A probable distance could be at least 10*lambda, the wavelength.

Spatial multiplexing MIMO depends mathematically on 2 factors: 1-The rank of the channel matrix and 2-Its condition number Physically now this translates into two factors as well: The resolution of the antenna array on both RX and Tx and the angular spread or angular difference between different multipaths. As long as the angular difference expressed in terms of cosines is larger than the resolution of the array which is inversely proportional to the array length normalized to the frequency then streams carried by different multipaths can be resolved and separated in an almost orthogonal way . In a rich scattering ( wide power angular spread) environment half a wavelength antenna separation is enough for distinguishing between different signatures.

Not the answer you're looking for? Browse other questions tagged wireless radio antenna practical or ask your own question.

5
In a RAKE receiver, why is a Path Searcher needed? Can't the delays be found from the Channel Estimator?

3
2.4GHz Warmer/Colder game based on signal strength
6
Any wireless technology to find the distance between transmitter and receiver
3
433MHz RF transmission only working when holding usb cable in the air
1
Wireless transmission power for multiple receivers
1
Using CP antenna for receiving and LP for transmitting
1
How do you null interference with beamforming?
2
What is the difference between smart antennas and phased arrays?
0
How can I combine two antennas that carry different frequencies?
1
Distance requirements in antenna arrays?
1
Is there an easy way to interface a receiving 457kHz ferrite rod antenna with a microcontroller (BeagleBone Black)?