I have a car seat motor that I am driving via PWM and am aiming to measure its position by counting the minor variations in voltage across a current sensing resistor attached to the low side of a FET as the motor rotates. At higher duties the Vpp is significantly less (30mV) than those at 25% duty (4.7V). I currently tap the signal for measuring by a microcontroller ADC at two different gain stages to handle this, but desire to make this all happen in one stage with a variable gain circuit so only 1 ADC is needed.

Before I go into what I've attempted I want to state my primary question. How do I dynamically adjust the gain of my waveform to output a signal at a constant Vpp when my input Vpp ranges from 30mV to 4.7V?

Currently the circuit flow is:

My current attempt to solve this issue is to use the PWM signal used to drive the motor as a means of adjusting gain on a separate gain only amp. The gain is set to put the high duty signal at the desired Vpp. As the duty increases and inverted copy of the duty is filtered into an analog signal (represented by V3) and fed through a voltage follower connected to the inverting pin on the amp with the gain stage. But when I do this, the DC outputted in step 5 causes the signal to saturate at the op amp's upper rail when low duties are used. If I put a diode clamp between the signal from step 5 and the gain only amp, I can control the gain as I had hoped. When I put a capacitor between the gain resistor attached to ground and ground to reduce DC gain to unity and eliminate the need for the diode clamp, the gain is no longer controlled and the DC gain isn't unity. The diode clamp needs to be replaced since the various Vpp values need different offsets so they won't saturate.

Here's that last paragraph as a schematic. The op-amps are LMV344 op-amps, not LMV324 as the illustration suggests. The input signal has a Vpp from 30mV to 4.7V depending on the motor duty. 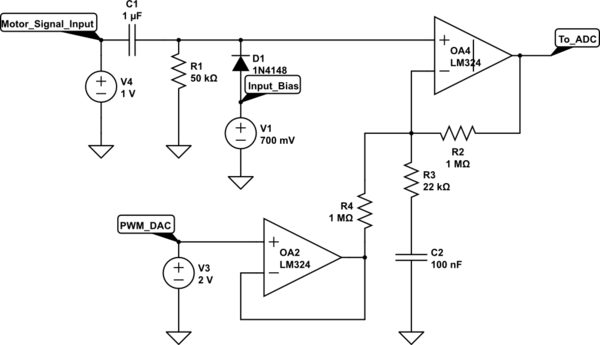 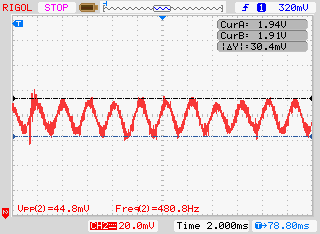 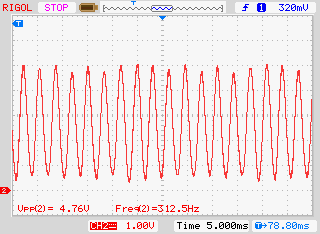 How can I get a variable gain circuit, amplify signals with Vpp between 30mV and 4.7V to around 4.7V, while avoiding saturation due to input DC levels? Thank you in advance. This has consumed me for the past month.

The Fliege notch filter is a versatile and somewhat forgiving filter, and I have run one up for the 20kHz: 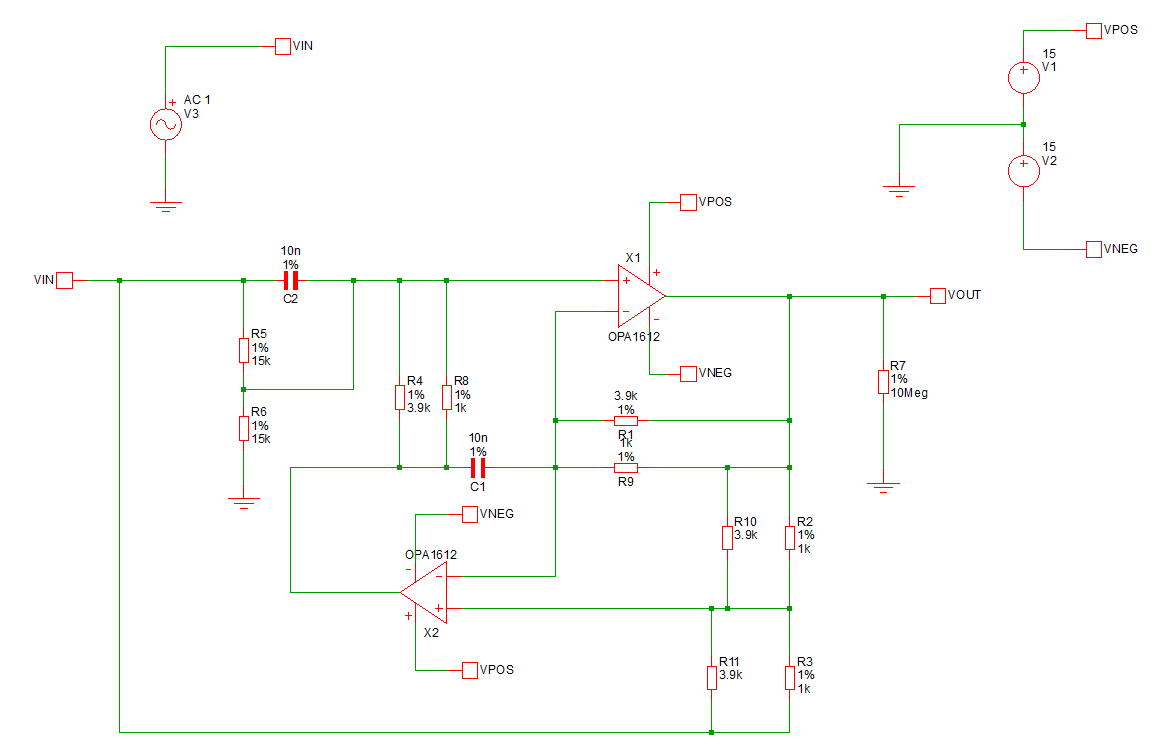 It has this simulated response: 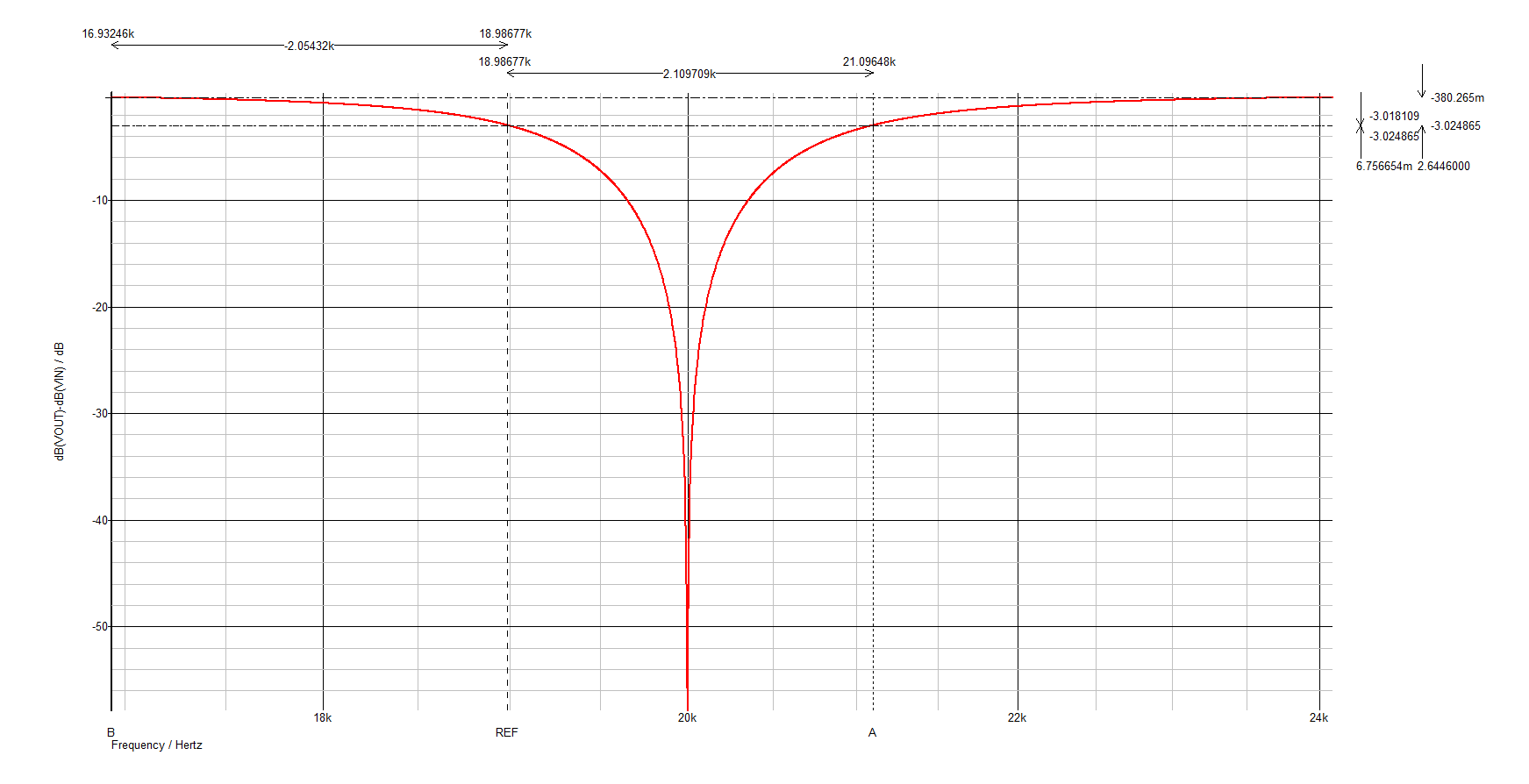 The notch depth is -55dB here, although I would expect -40dB as a more realistic response with real devices and layout. The bandwidth between the -3dB points is about 2kHz.

As this filter is unity gain at DC, it would be simple to introduce a DC offset to run on single supply.

Note that R7 is only present to enable the simulation to converge, and the notch depth is proportional to the ratio \$ \frac {C_0} {R_0} \$

You could then use a high pass filter to attenuate any harmonics of the PWM drive signal which may simplify the rest of the signal chain.

Not the answer you're looking for? Browse other questions tagged operational-amplifier gain unity-gain or ask your own question.