The voltage is stepped up at the beginning of transmission lines and step down again at the end of the latter. This is, of course, to reduce the current passing through the line and thus reducing the heat losses. \$P\$ loss \$= I^2 \cdot R\$. but also this equation can be rewritten as \$P\$ loss \$= V^2 / R\$. So, if we raised the voltage difference across the whole transmission line we also will increase the losses, according to the second equation. I know this happens to be false. But, what is exactly wrong with that way of thinking?! 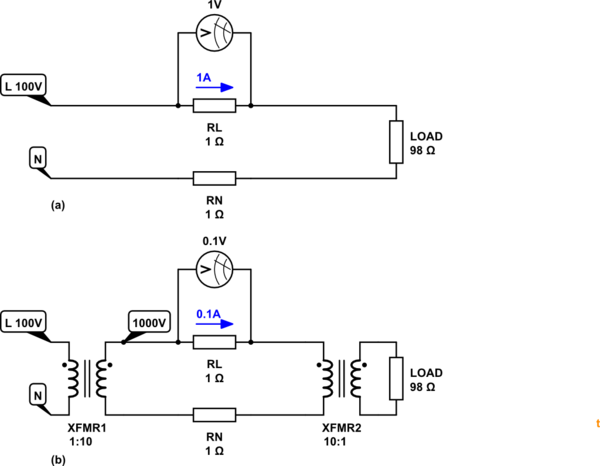 Figure 1. A comparison between power transmitted (a) directly and (b) via step-up and step-down transformers on the same pair of wires as (a).

3- The voltage drop across the line depends on the resistance of the line and the current passing through it V=I*R.

4- When the voltage is stepped up , the current required to deliver a constant power decreses (P=V*I).so, the drop across the line decreses and then the losses also decrease.

For transmission loss with a fixed termination voltage, the loss would be;

then by increasing input by x%, the incremental Power ΔPi loss becomes

But in North America, Line voltage is regulated to within 5% for HV Transmission and 5% for Distribution and drop cables.

This can be done in substations using active tap switching and D.T.'s using either fixed or active tap changers.

But effectively it means the load regulation is 10% which implies the Zout of the network is 10% of the total load impedance in the network.

For every x% increase in line voltage drop! there would be a 2x% rise in power loss.

This question resonated with me because I also tripped on it when I first studied circuits. Plain and simple, "what is wrong exactly" in that argument is that the correct voltage in the formula for the line losses is not \$V\$ (understood as the voltage to ground), but the voltage difference across the line (which is usually much lower compared to \$V\$).

The formula \$P=V I\$ can be very misleading. It would be better to always write it as \$P=\Delta V ·I\$, where \$\Delta V\$ is the voltage drop across the device or section of the circuit for which you want to calculate \$P\$.

The correct argument for higher voltages producing lower transmission losses goes as follows. Take a simple circuit consisting of an ideal DC generator with voltage \$V_0\$, a transmission line having resistance \$R\$, and a load having resistance \$R_{load}\$. Let us label the voltage at the load as \$V_{load}\$. The circuit is readily solved: $$ I = \frac{V_0}{R + R_{load}} $$

Now, to complete the argument, it is necessary to point out that in a power system the load resistance \$R_{load}\$ is not really constant. Rather, it is the power demand \$P_{load}\$ that remains roughly constant against changes of voltage \$V_{load}\$. Then it is easy to see by looking at the formulas above that by increasing \$V_0\$ (using transformers), we reduce \$I\$, and therefore \$P_{loss}\$ is reduced with respect to \$P_{load}\$. If you want to follow through the whole mathematical solution, you need to solve the so-called power-flow equation, which is not overly difficult to do (it's a second-degree equation on the voltage).

On "What's wrong with thinking that way". For a given Power output you need, think about "few packets (Q) with high energy (low I, high V)", Versus "many packets with low energy (high I, low V). Now think you have to move those packets through a long wire with non-null resistance.

That's why home power supply in Europe had been turning towards a higher voltage delivering model as technology allowed to do it safely.

your question is good and challenging, but it has a simple answer, in a power transmission lines the sending power is Ps=VsIs (S for abbreviation of sending), therefore because we wanna have a maximum power without any changing, Ps consider to be constant, so if we increase the voltage (Vs) with transformer, the current (Is) will decrease, then in a transmission line, voltage drop is DeltaV=ZIs , therefore power losses with equation Ploss=((deltav)^2)/Z will be decrease. I think this question can be a question for alot of students, and i like it.

Having said that if the leakage losses are X then doubling the voltage makes the losses 4X so, there does come a point when the two losses may become equal but, there would be sparks flying before that happened.

Original question stems from confusion about where exactly the Ohm’s law should be applied and what namely does “\$R\$” refer to.

There are, roughly, three sources of power losses related to transmission, that are determined by:

Losses due to transmission voltage (such as currents leaking from/between wires) may play a noticeable rôle in cables, but can be neglected in overhead power lines until the isolation breaks down.

There are also losses directly and indirectly inflicted by conversion. Even a simple transformer has inherent power losses due to its magnetic core. Moreover, a transformer uses an out-of-phase (reactive) AC current that put an additional term to \$I\$ of the line feeding it (hence increasing ohmic losses to some extent). So, unlike the model presented in Transistor’s answer, transformers do not act for free. But, for sufficiently long distances (where \$R_{\mathrm{wire}}\$ is of significant value) and heavy loads stepping the transmission voltage up pays off. Decrease in ohmic losses can be much larger than increase in all other ones.

Not the answer you're looking for? Browse other questions tagged power high-voltage heat power-engineering step-down or ask your own question.