What would be a better heatsink to buy, copper or aluminum? What does copper do that aluminum doesn't? I know it is more expensive and is heavier, so what is the advantage of copper?

EDIT: more detail about the application. I need a heatsink for a TEG peltier module, the cool side. The source of power is simply the heat of your hand, coming from the hot side. To prevent it from neutralizing both sides of the peltier, I'm using heatsinks to cool the other side. Therefore, I need the most powerful heatsink available so that the peltier will produce voltage longer.

You have a lot of good information from the users above! Please consider my answer significant and important bit supplimental to the advice you already have:

The thermal interface material (TIM) can matter as much and easily even more than the material you choose for your heatsink! I say this from experience and personally testing dozens of types and varieties of interface material. Your budget, attachment methods, and other design perameters will probably narrow your choices a specific type of TIM. For example: a paste requires the heatsink to be mechanically secured and an adhesive does not. Some materials are messy and difficult to use but perform well and some stuff out there is almost worthless in its performance and may or may not be easy to use.

I would say with a lot of confidence that the TIM you use can easily matter way more than if you use copper or aluminium. Not in every case but the performance differences can be surprising.

Seeking popular and well reviewed materials for CPU/heatisinks can give you some good options to choose from.

Copper has got better thermal conductivity.

But thermal conductivity within the solid material is only a part of the story. The rest of the story depends on where one wants to dump the heat into.

Copper heatsink (one may also call it heat transfer block) will perform better than aluminium.

In other words, there's a fan blowing onto the heatsink. Copper heatsink will perform better than aluminium.

I've saved best for last. It also looks like it's the O.P.'s case too.

1 I might add that the marginal increase is often not worth the cost of Cu.

This curve demonstrates the non-linear relationship between heat transfer and material thermal conductivity. The curve is generic. It applies to any application having both conduction and convection components to the total heat transfer. [Radiation is typically small and is ignored in this calculation.] The shape of the curve is the same regardless of the application. The quantitative values on the axes are not shown because they depend on the power, part size and convective cooling conditions. They become fixed for any given application and set of conditions. It’s obvious from the shape of the curve that heat transfer depends on material thermal conductivity but there is also a point, a knee in the curve, where increasing thermal conductivity produces negligible improvement in the heat transfer.
(source, emphasis mine N.A.)

Phil have already linked an ECN article which compares aluminium and copper in air with natural convection. Here's another take at it: what if we compare aluminum to a material with lower thermal conductivity (unlike copper). There is a company that makes thermally conductive plastic. It has got \$ \mathrm{20 \frac {W} {m\cdot K} } \$ conductivity, but that's a lot for a plastic. They have benchmarked it against aluminium in air with natural convection. 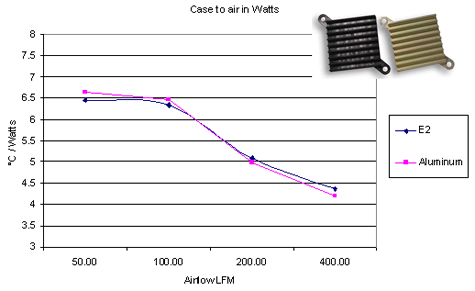 E2 is the plastic (source)

It's a complex question, with many factors. Let's look at some physical properties:

What do these properties mean? For all the comparisons that follow, consider two materials of identical geometry.

Copper's higher thermal conductivity means the temperature across the heatsink will be more uniform. This can be advantageous since the extremities of the heatsink will be warmer (and thus more effectively radiating), and the hot spot attached to the thermal load will be cooler.

Copper's higher volumetric heat capacity means it will take a larger quantity of energy to raise the heat sink's temperature. This means copper is able to "smooth out" the thermal load more effectively. That might mean brief periods of thermal load result in a lower peak temperature.

The differing anodic index of the materials might make one material more favorable if galvanic corrosion is a concern. Which is more favorable will depend on what other metals are in contact with the heat sink.

Based on these physical properties, copper would seem to have superior thermal performance in every case. But how does this translate to real performance? We must take into account not only the heatsink material, but how this material interacts with the ambient environment. The interface between the heatsink and its surroundings (air, usually) is very significant. Furthermore, the particular geometry of the heatsink is significant as well. We must consider all these things.

A study by Michael Haskell, Comparing the Impact of Different Heat Sink Materials on Cooling Performance performed some empirical and computational tests on aluminium, copper, and graphite foam heatsinks of identical geometry. I can grossly simplify the findings: (and I'll ignore the graphite foam heatsink)

For the particular geometry tested, aluminium and copper had very similar performance, with copper being just a little bit better. To give you an idea, at a 1.5 m/s airflow, copper's thermal resistance from the heater to the air was 1.637 K/W, while aluminium was 1.677. These numbers are so close it would be difficult to justify the additional cost and weight of copper.

As the heatsink becomes large compared to the thing being cooled, copper gains an edge over aluminium due to its higher thermal conductivity. This is because the copper is able to maintain a more uniform heat distribution, drawing the heat out to the extremities more effectively, and more effectively utilizing the entire radiating area. The same study did a computational study for a large CPU cooler and calculated thermal resistances of 0.57 K/W for copper and 0.69 K/W for aluminium.

Thermal conductivity of copper is almost 60% higher than that of aluminium. This means that a copper heat sink will be quite more effective at removing heat than an aluminium one.

Which you choose is a matter of compromise: alumimium heat sinks are cheaper and lighter, and so are the first choice for general purpose design. Howewer, where you must remove large quantities of heat in little space, copper might be preferable.

However, it is not possible to make an absolute comparison between the two materials without knowing the specific application and the other constraints of the specific design the heat sink must be adapted to.

There are other factors to keep in mind (including the environment where the heat sink must "live" in).

Copper is able to conduct heat better than aluminium, but thermal coupling between heat source and heat sink, and also between heat sink and "outer world" should be considered.

For example, is the heat sink coupled with free air through small fins? Or is it coupled to some kind of liquid coolant flowing in a tube? Is convection involved in heat removal process, or is heat radiation the primary mechanism (think of space probes, as an extreme case). Is the environment likely to cause corrosion (underwater devices; devices inside some chemical reactor)? Some alloys are more resistant to certain type of corrosion than others.

Copper has about between 50% and double the thermal conductivity of aluminum depending on alloy, so for a given performance a copper heatsink can be 'half' the size of an aluminum one.

However, copper is much more expensive than aluminum, and somewhat more difficult to fabricate, so it is more costly to produce. In some cases, the small size is worth paying for.

Not the answer you're looking for? Browse other questions tagged heatsink or ask your own question.

15
Why are electrically insulating heatsinks so rare? Is it just cost?

2
Heatsink or IC: how to determine root cause of overtemp?
2
TEC 12706 not drawing more than 1.6A when powered by a 12V PC SMPS
2
Extruded heatsink question
0
SMD MOSFET copper pad heatsink
0
Does heatsink transfer plate thickness matter?
22
Using CPU heat to generate electricity
1
Why does a Peltier cooler heat up when cooled by ice?