How can an RC plane receive when the polarization of the antennas is nog alligned?

We were learning about antennas and their radiation patterns and polarizations. Our teacher told us that directly on top of a monopole, there is no field. And that if the polarisation is not along the antenna, nothing is received either.

I then posed the situation of an RC plane, and everyone agreed it should not work, according to what we just learned. 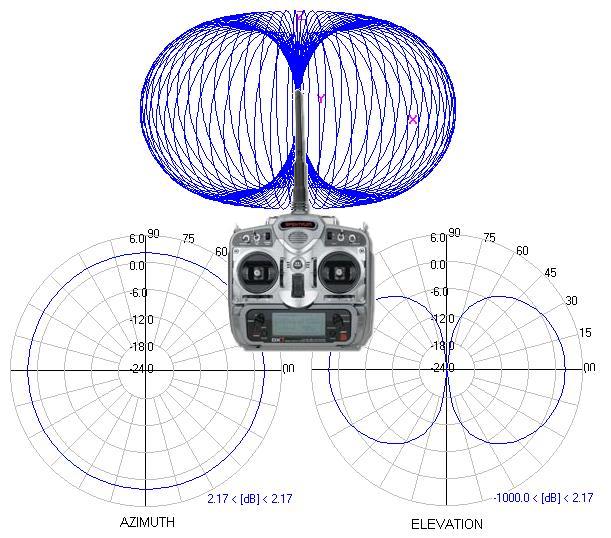 In theory it appears that if I point the antenna directly at the plane there should be no reception at all. Yet this works just fine.

With the same logic, if the plane flies straight away from you, with its antenna pointing at you, there should be no reception. Yet this works just fine.

In theory, if I hold the antenna vertically and the plane flies horizontally, the polarization is perpendicular and there should be no reception. Yet this works just fine as well.

If you are using 27 MHz, wavelength is 11 metres. Ignoring antenna gain (G) i.e. treating the antenna like an isotropic device, the aperture is about 10 square metres.

As the aeroplane flies over the centre of the dead spot of a vertical monopole transmitter there may indeed be zero watts per square metre flowing directly through the middle of the aperture but that isn't true of the outer parts of the aperture and the antenna will receive a signal even if the simplified geometry suggests it won't.

Clearly, at 2.5 GHz the aperture is much smaller and this can become a problem as frequency rises but, remember that a decent radio receiver can "work with" a vast dynamic range of signal levels so only a tiny fraction of the power transmitted needs to be received for it to work.

A typical device might be sensitive to 1 uV RMS from the antenna - for a 50 ohm system that's a power received of only 20 fempto watts.

Not the answer you're looking for? Browse other questions tagged rf radio physics or ask your own question.

4
RF - changing a trace slightly from original design...?
15
PCB clearance/keepout area surrounding wireless antenna
1
Antenna efficiency and PCB impact
2
Antenna for broadcast AM reception on ARM Radio SDR
6
GSM/GPRS antenna noise depending on cable length and position
1
Why is my RF circuit behaving like this?
1
Use dipole antenna in monopole design
0
How to design a feed line for a single wire antenna
3
How to deal with ground in VCCed-chassis device?
5
RFID antenna multiplexer