It is well-known that any electrical passive element (Resistor, Capacitor,Inductor) contains parasitics that usually manifest themselves at high frequency ranges of operation.

For example, a resistor at DC can be modeled, simply, by just a resistance that depends on the material and geometry of the element. At higher frequencies, parasitic capacitance and inductance start to show up, and this can be experimentally found (for example) by:

The same argument is also valid for capacitors and inductors, in which their ideal model is altered and parasitic effects are added at high frequencies.

The plot of Impedance vs. frequency can tell us about these parasitics and when do they start to show up. They will also inform us about the valid frequency range of operation, in which after it, the element no longer behaves normally (An inductor acting as a capacitor after its self resonance frequency (SRF) for example) as shown below: 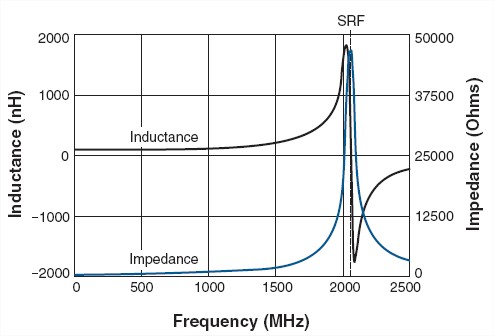 So when we mention the term "high frequencies", we (probably?) mean beyond the SRF, as elements start behaving as unintended.

Up to my understanding, every passive element generally behaves in a way that I thought of explaining by the figure below:

My questions are somehow interconnected and they are:

I concluded this from:

a. Skin effect for R, making it a function of frequency.

b. Picture #1 above (blue graph). Does the inductance really become negative, or is it the tool we are using that is telling me my inductor value was lost due to the large parasitic capacitance value?

1/2) More or less, I try to clarify, It seems to me you believe your graph in figure (2) shows R and L variations w.r.t frequency.
That graph simply shows impedance of a parallel resonant circuit made of approx constant 100nH inductor, 45kohm resistor and a \$\frac{1}{(2\pi\times 2\,\text{GHz})^2\times 100\,\text{nH}}\approx 65\,\text{fF}\$ capacitor.
This is one first level approximation which may however be good in many circumstances.
Then one can argue resistance is frequency dependant and add this to the model, the same for inductance and capacitance but this can usually hardly be seen on graphs unless you carefully measure, analize and fit curves to models.They are ususally hidden in measurements errors.
Then you can add many other extra parasitics and non linerities outlined above by other contributors, but there's no such an evidence in the sweep you posted.

b) Your meter shows variable (possibly negative) inductance just becouse you ask it to do so. It just measures an impedance, one complex ratio between voltage and current and then represent it as you configured it to do: you asked for Ls+Rs and if measured impedance phase does not agree with that model it just keep computing and findes "negative inductances".

Usabilty boundary (green/blue transition in fig. (2)) is not function of your component parasitic only, but it depends pretty much on the rest of the circuit e.g. if using that inductor in a resonator you should add stray capacitance to the computations and see if you get consisten numbers.

4) Yes SRF is that blue to red boundary.

3) Dimension do count. For resistors and capacitors usually the longer the part the higher the stray inductance. E.g. small SMD 0204 or 0603 may exhibit a few hundred pH while some big HV MKM capacitors I happened to use were specified as 7nH/cm w.r.t to terminals pitch.

It is not exactly as shown or as you assume. It is also not possible to have a universal model for all passive components.

L&C will have series R and parallel C,

C will have series R,L and parallel R, and sometimes more parts in the model

Components may have a series and parallel resonant frequency and many other variables for Vdc, T('C), I(L) with saturation.

It is possible to use caps above "series resonant freq", SRF but it is often useful to have inductors near or above "parallel resonant frequency", PRF unless to add another in series with higher PRF.

( Sometimes specs use SRF for both modes as self res. freq.)

When your operating frequency is in the range of the SRF, it is necessary to either choose a different part with higher SRF, or an "additional" part to provide the desired impedance (extra smaller L in series or smaller C in //)

Not the answer you're looking for? Browse other questions tagged capacitor inductor high-frequency modeling passive-components or ask your own question.

6
Zener diodes in high frequencies
21
Why does an inductor behave as a capacitor at high frequencies?
62
Why are there only four passive elements?
5
Modeling long wires in circuits
2
Modeling Photovoltaic Devices
0
Why do parasitic elements (e.g capacitance) appear on only high frequencies?
0
Passive Elements At high Frequency [parasitic effects]
2
What could cause my boost converter to output below its nominal voltage?
0
Plannar Inductor Unacounted Parasitic Capacitance