I am working on a solar energy project and I'm using a 10 panel array. For monitoring purposes I'm using a combiner device which tracks various data parameters like current, voltage and temperature. This combiner device should be able to withstand a 50A current and give current measurements with 0.5% error rating. Now I have already tested 2 different methods and faced the corresponding problems.

Now on searching for other techniques online, I found some using an inductor, current transformer, transistor. But I have no experience or knowledge of their capabilities. I need help to choose the best technique for current measurement with 50Amps and 0.5% error margin and also not too expensive. Thank you! 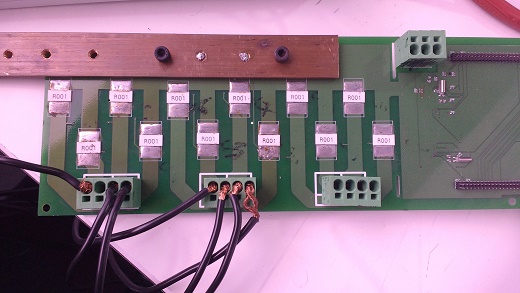 Inductors and regular current transformers only work on AC. For measuring DC current your choices are a shunt resistor, Hall effect sensor, or DCCT (DC 'Current Transformer', which is really a magnetic flux balancing device). DCCT's are bulky and expensive. Hall effect has lower loss than a shunt resistor, but is less accurate.

A shunt resistor must drop voltage to measure current, but that voltage doesn't have to be large. With Kelvin connections and a good 'zero-drift' op amp you should be able to get accurate readings with very low voltage drop and acceptable power dissipation.

At 50A a 0.001Ω resistor dissipates 50A2*0.001Ω = 2.5W, with a voltage drop of 50mV. But if you put two 0.001Ω resistors in parallel then the voltage is halved and current splits between them, so they only dissipate 0.625W each (75% less) and total power dissipation is halved so heating is greatly reduced. Of course you now only have 25mV to work with instead of 50mV, but simply doubling the amplifier gain will get your signal back to its original level.

You should also check that your PCB traces and connectors are large enough and not significantly contributing to heating (don't just assume - measure the voltage drop across them!).

What are the values of the resistor you have tested? What is the current range you want to measure? You have to make sure the resistor has the correct power rating so that it is capable of dissipating the heat at full range.

For example, the lower value of resistor I know it exists is 0.001 Ohms, that gives 2.5 W so you must make sure the resistor is, at least, rated at 2.5 W; the higher the better. The voltage range will be 0 to 50mV.

Unfortunately, inductor measurement technique is not available if the current is direct.

If the heat dissipation si really the concern you can use hall effect probe.
Hall probe measures magnetic field around the wire when the current is flowing through it.
To reduce the error just increase the magntic flux vs current ratio by measuring an inductor instead of a wire.

Another option is to use current divider. Use resistors in parallel connenction and one larger andy you are mesuring current lowered by factor Rc/(Rm+Rc). Using 1mOhm rsistors as Rc and one bigger for Rm you will get low heat dissipation on Rc resistors (conductive branch) and reasonably low current to measure on Rm resistor (measuring branch).

Not the answer you're looking for? Browse other questions tagged current current-measurement power-electronics hall-effect shunt or ask your own question.