why is the outside of an electromagnet not magnetic?

On the electromagnet (5 Volts DC, built upon a transformer core) setup pictured below , only the core part is magnetic (when powered, it attracts a piece of steel) but not the 2 "wings" outside that are supposed to channel the magnetic flux. Their magnetic force is about 1/10th of the central core

Why is that? Is there a geometry to improve channeling of magnetic flux on the outside of the coil ? 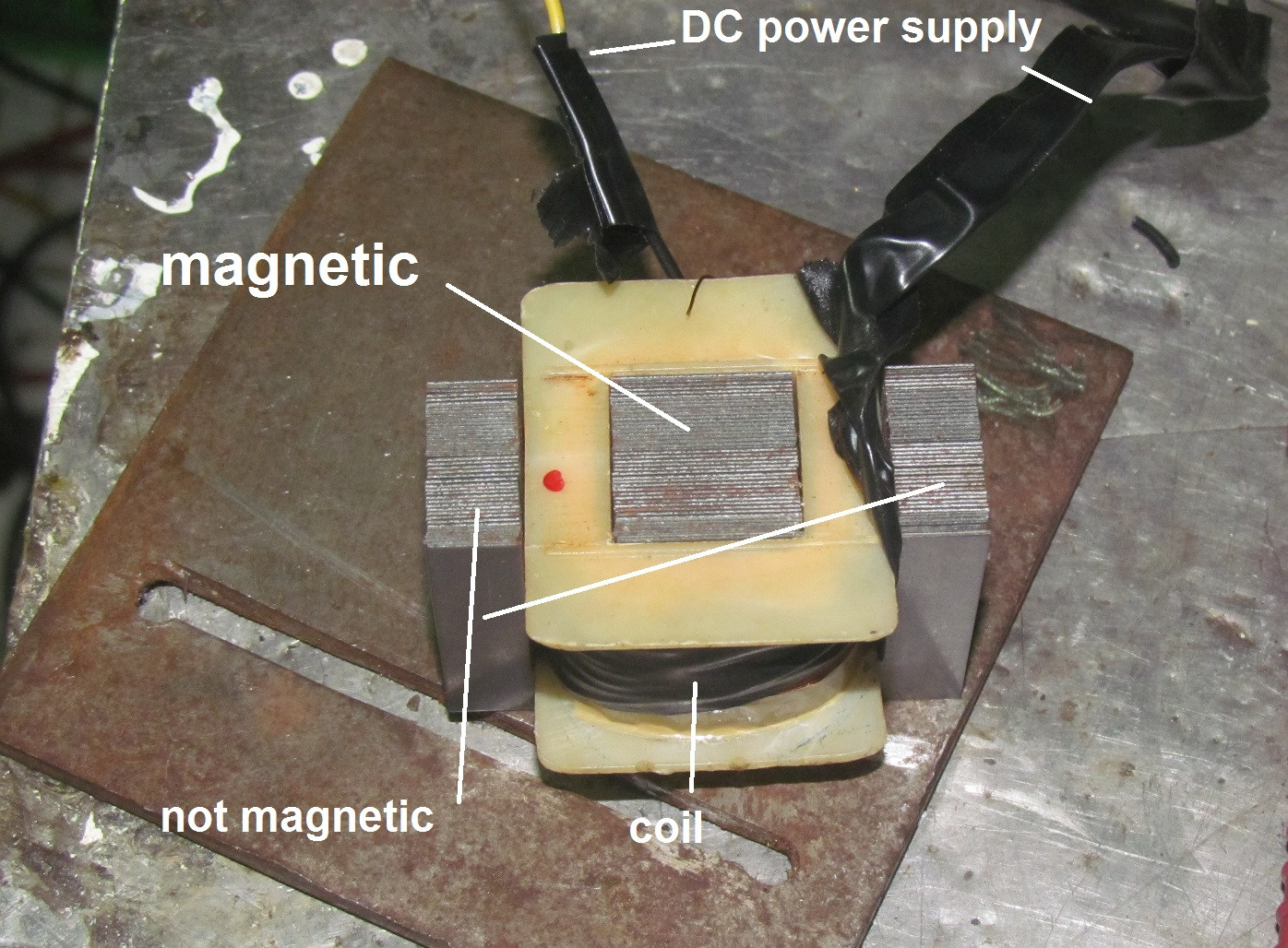 Learning to read a magnetic circuit is a skill that is not much taught nowadays.

You're right (in your comment to Dmitry's answer) that the same flux is present on the central pole and on the outer (split) pole.

However, notice that the total area on the central pole is one square (I'll guess one square inch) - flush with the bobbin.

The actual term for resistance in magnetic circuits is "reluctance", and that for conductivity is "permeability". Air has a "relative permeability" of 1, iron in the thousands. So an iron bar conducts magnetic flux thousands of times better than an air path of the same length (until high flux densities - then it will saturate).

Calculating the exact flux densities can be done with calculus for simple shapes, but simulations and finite element analysis are more often used now.

Now, I hope you kept the "I" laminations? Use them as an iron bar spanning the top of the "E". As you bring them closer, you'll find the air gaps between E and I reduce - and as you reduce the gap, the flux will concentrate in those gaps - and as you reduce the air gaps, you reduce the "resistance" i.e. the reluctance, and so the "current" i.e. flux will increase dramatically, and so will the attractive force between the electromagnet and the bar. WARNING keep your fingers out of the way when you do this!

The magnetic flux can't increase infinitely high, eventually the iron will "saturate" at about 1.2 Tesla.

Now you can see how Dmitry's horseshoe magnet works, and how to improve it - bend the poles closer together to reduce the air gap. Also, look at toy electric motors - how the pole pieces are shaped to match the iron rotor (with the coil wound on it) to concentrate the flux in the small gap between the magnet's poles and the rotor.

Pay attention to the figures, read the words later... Note the following:

Having covered some of the "why", if you're really asking "what do I do about it?" add some context about what you want to achieve to the question. It should now be clear that magnetic circuits are designed for a specific purpose, and we don't know anything about what your purpose is.

If you need to have two poles with equal attractive force, you should use a U-shaped electromagnet (also called horseshoe electromagnet) like this one:

Not the answer you're looking for? Browse other questions tagged electromagnetism solenoid magnetics magnetic-flux or ask your own question.

0
magnetic field outside solenoid
3
How can I describe mathematically what is happening in my home made LVDT variant?
0
Can a toroidal transformer with two secondaries, inner and outer, simultaneously induce current in both?
1
Solenoid's field intensity calculation dependency on width/diameter of coil?
3
Magnetic field strength and flux density from hysteresis curve
0
demagnetising a magnet with a high frequency transformer
6
What happens to parts of induction cooker magnetic field not covered with the pan?
0
Ferrite core in electromagnets