I would like to replace original NTC sensor for: https://www.aliexpress.com/item/TGT70-EP-Thermoregulator-Touch-Screen-Heating-Thermostat-for-Warm-Floor-Water-Electric-Heating-System-Thermostat/32669215824.html?spm=2114.13010308.0.64.mHnkr7 with self-made NTC probe. The problem is that manufacturer doesn't want to share any information on it. All I got is the picture and short description of it (not type or chart/table). Can anybody help to identify it? 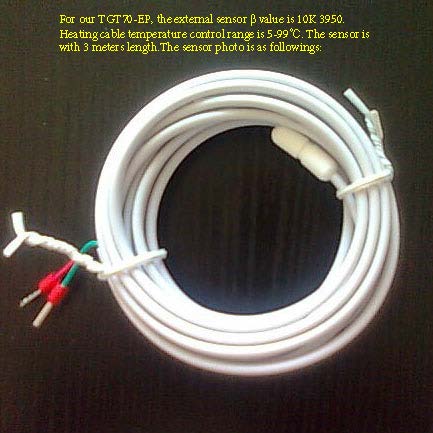 It's possible the manufacturer has no idea. The beta, as mkeith comments, is given, however the two temperatures at which beta is specified is not. It should be something like 25/50, 25/85 or 25/100.

I suggest you take a good sample of the instrument and adjust the input resistance with a pot until it reads 25, 50, 75, and 100°C. Read the pot with a digital ohmmeter (the first number should be 10K). Then you will be able to match a proper thermistor datasheet.

Or you could just buy some other no-spec sheet piece of 'stuff' that has the string '3950' in the description and hope it works well enough for long enough.