I am self-taught in electronics, and I am learning using several different sources, both online and off. This URL shows a circuit (and I've seen similar before) of a low-power voltage divider using an emitter follower.

However, on the output, there is both a load and a 1k resistor in parallel. What is the 1k resistor for? It seems to me to be a waste of electricity. Won't the voltage after the emitter always be 1V with or without the load resistor? It also doesn't seem to be a current limiter since it is in parallel. I can't think of what its function would be.

The 1k0 resistor is simply a legacy from a previously used circuit. The author has left this component in to demonstrate what happens if you add additional load to the circuit but has not explained the intermediate circuit.

Consider this version instead: 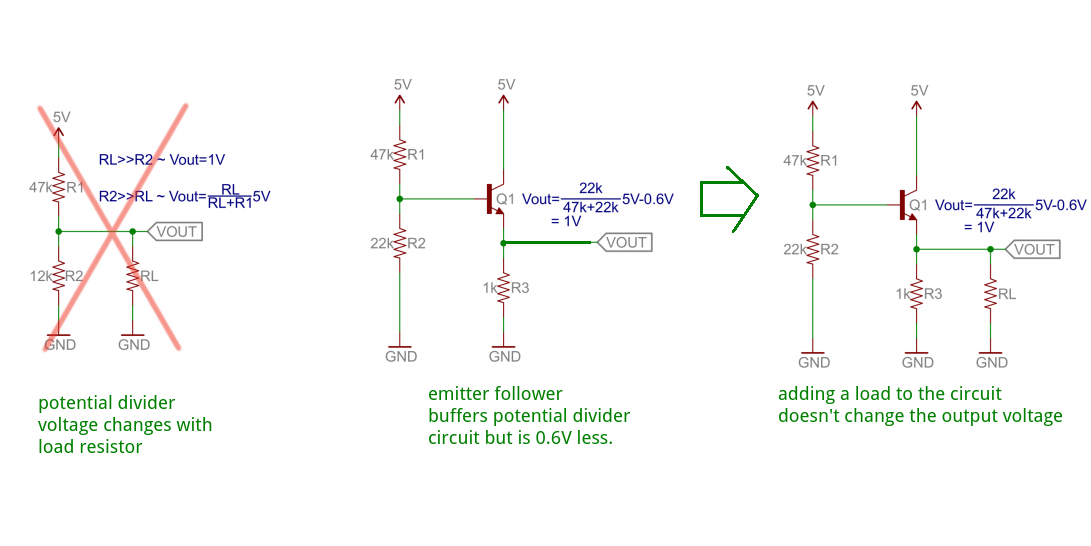 The first circuit shows that adding a load to a potential divider circuit will pull down the voltage at the junction.

Look at the equations in blue:

The author is saying that:

(i) if Rload is much greater than R2 (a factor of at least 10) it doesn't change the voltage too much and we can ignore it.

(ii) If R2 is similar or less than Rload then we need to re-calculate the voltage. (the author doesn't explain this very well and concentrates on the much less)

How the emitter follower work using this information?

(I've drawn the intermediate circuit to make this process clearer)

Q1 only takes a very small base current (because it has current amplification of at least 100). As long as this base current is at least 10 times smaller than the current going through R1, R2 it doesn't reduce the voltage at the junction too much. (remember that gold band resistors have a 5% tolerance so we expect some variation in any case)

The transistor's output is across a 1k0 resistor load (much lower than R2). It is supplied by current through the transistor and not the potential divider.

The base-emitter junction will drop about 0.6V. The output voltage at the emitter will be 0.6V less than the potential divider. (middle diagram)

The author then adds an even larger load (smaller resistance) across the emitter resistor (righthand diagram) to demonstrate this has no effect on the output voltage.

In other words the load can vary but the voltage across it stays the same. (which is the teaching point).

To answer your question - Yes, the 1k0 (R3) resistor could be removed, in practice it has no function and is simply part of the load but you need to take this circuit diagram in the context of the whole article which starts with a common emitter amplifier designed with R3 as a 1k0 resistor. Context here is important.

The 1k resistor is there to help make the \$I_C\$ current more stable with respect to changes in the transistor \$h_{FE}\$ parameter. It's a kind of negative feedback. Unfortunately, it lowers the AC gain, too. If the frequency of the signal being amplified is not too low, there is usually a capacitor in parallel with this resistor to make it "invisible" for the AC signal while still providing stabilization on the DC \$I_C\$ current. However, since the amplifier is for audio signals, the capacitor would have to be fairly large and I guess that's the reason they've left it out.

You really should be clearer about the schematic you are referencing. I've looked at the web page and your writing and I'm pretty sure that you meant the circuit which is to the right of the one with the large X struck through it on its left. That is an emitter follower power supply, basically: 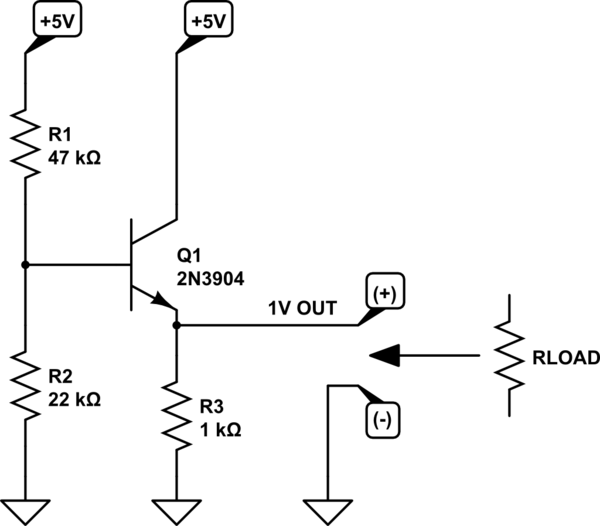 I've intentionally left the RLOAD resistor out of the circuit to make it a little clearer why the \$R_3=1k\Omega\$ is there. Without it, the emitter of \$Q_1\$ is just floating. With it added, you get a light load (about \$1mA\$) which helps nail it down better but also makes the \$V_{BE}\$ relatively predictable. The value of \$V_{BE}\$ varies at about \$60mV\$ per decade of current density in the BJT. With almost no current at all, the emitter's voltage may be quite different than the estimated \$1V\$ (higher) and when you use a high impedance voltmeter on it you wouldn't measure \$1V\$ in any consistent way. But with the \$1mA\$ load present, you'll get pretty close to what is expected. And if you now add RLOAD to the circuit, and it draws perhaps \$20mA\$ let's say, then you won't see more than about an 80mV drop in the measured voltage there. It's a reasonable approach to this design.

The purpose of the emitter follower is two fold. With an available current gain of hFE the output current is limited by the input current and thus proportional to Rb/Rout but dependent on Vin and Vout.

Note that in all LDO's with BJT's like the LM317 they use many stages of gain with emitter followers on the output, which accounts for the Vin-Vout dropout voltage of 1.5 upto ~2.5V worst case load, instead of just this single stage Vbe drop of 0.7V, while the output voltage is regulated by feedback gain resistors and an internal precision Vref.

The twofold purpose of emitter follower is to also,reduce the output impedance of Rb(equiv) by Rout=Rb/hFE , so it is not an ideal voltage source, but improved by buffering resistance with available current gain at the same time. a Darlington two-stage has hFE squared or 10,000 in this example but then a 1.4V drop voltage for 2x Vbe.

Not the answer you're looking for? Browse other questions tagged transistors voltage-divider or ask your own question.

4
Arduino/Atmega with TIP120/121/122 transistors: base current question
0
Voltage Divider Question
5
Problem Switching Relay with Transistor from Microcontroller
4
Stiff Voltage Divider Bias for an Emitter Follower
3
Horowitz's exercise 2.2
1
Attempt to use 2n2222 as a switch, but it seems to work below 5v (all the way down to < 1v). Why?
4
Analyzing a transistor relay driver
2
Anomalies while using transistor as switch
3
Trouble understanding output impedance of common collector