Why does an inductor behave as a capacitor at high frequencies?

In truth, I've only been told this anecdotally by an instructor, but can someone explain the physics at play?

I have been told that if an inductor is driven at a high enough frequency, it will begin to behave as an capacitor, but I cannot figure out why.

An ideal inductor would not behave like a capacitor, but in the real world there are no ideal components.

Basically, any real inductor can be though of an ideal inductor that has a resistor in series with it (wire resistance) and a capacitor in parallel with it (parasitic capacitance).

Now, where does the parasitic capacitance come from? an inductor is made out of a coil of insulated wire, so there are tiny capacitors between the windings (since there are two sections of wire separated by an insulator). Each section of windings is at a slightly different potential (because of wire inductance and resistance).

This is why some high frequency inductors have their windings far apart - to reduce the capacitance.

What Pentium100 said. I can only add an illustration. Please excuse my hand drawing skills. 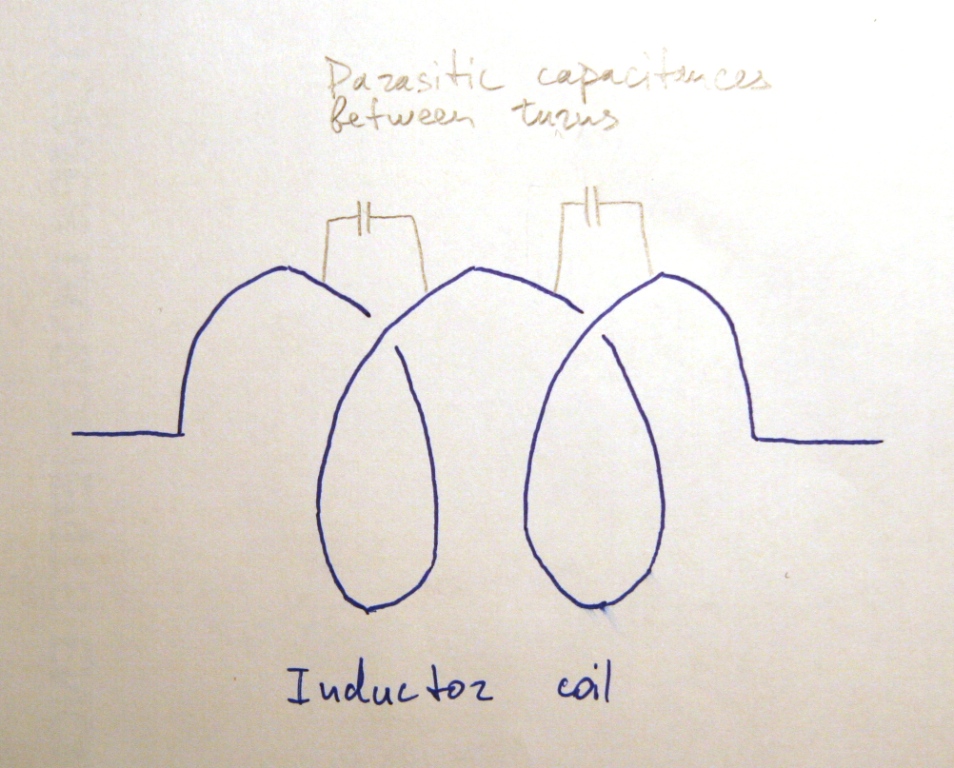 Capacitors have two conductive plates separate by an insulator. The turns of wire in a coil can also create a capacitor because between each turn of wire there are two conductors separated by an insulator, which can be air, enamel, ceramic, etc. When the right frequency is applied to the inductor, the inter-turn capacitance can create a resonant circuit. This inter-turn capacitance only happens with AC and not DC because inductors are a short with DC.

Not the answer you're looking for? Browse other questions tagged inductor high-frequency parasitic-capacitance or ask your own question.

48
Why do fundamental circuit laws break down at high frequency AC?
4
Why are transistors difficult to use in special cases such as >100 MHz operation?

2
How do you calculate the value of the inductor and capacitor in a parallel LC circuit?
1
Can this gyrator handle high current and/or high voltage?
4
High current ripple through inductor
3
LC Oscillator Circuit Analysis
0
Measuring current vs voltage
13
Why isn't there a non-conducting core wire for high-frequency coil applications
0
Complete discharging of Initially charged capacitor through Inductor
1
Building intuition on the behavior of inductors and capacitors with both voltage and current
0
How exactly does the inductor in an LC filter reduce motor noise?