I have a 3 phase 6 pole 415V induction motor which has 24 VAC applied between the R & Y phases 3 seconds after the main power is removed as a means of preventing condensation by heating the winding. Usually the applied 24 VAC does not cause motor rotation but after a rewind the unloaded motor will now continue to rotate if 24 VAC is applied before the motor has stopped turning after main power is turned off.

This ability to operate on "single phase" AC at low voltage seems contrary to what we would expect for a 3 phase 415 VAC motor, and not what we have experienced before the rewind.

Can anyone explain why the motor may now operate in this manner and why a rewind was able to change how it operated?

We have an 08 motor of rating 15KW, 6 Pole, 415V, CGL make installed. these induction motor has anti condensate winding heating provision given of 24V AC(Between R and Y phase) through its power cable lead when motor is in stop condition. there is a timer of 3 sec installed in control circuit between motor stop and winding heating start.

One motor was overhauled and when it restored without coupled to the load, it runs perfectly fine but when we stop it, within 3 Sec 24V AC between R and Y phase (4.5 Amp current in R & Y phase) gets starts and motor remain in continuous in running state with reduced speed, even its main supply 440V AC) gets isolated through contactor logic.

since the motor is decoupled and its inertia is high it dosent come to zero speed within 3 Sec of stoppage and 24V AC between R & Y phase gets starts and it remain continue in rotation with reduced speed (may be due to required rotating field gets fulfilled with 24V AC only in running condition, and due to the single phasing with 24V AC)

This seems a unique finding in my career, please share any experience related to this and some theory part.

I have no direct experience with this, but I know that a lightly loaded, 3-phase induction motor can continue to run when a phase is lost. It is a little surprising that the motor continues to run with such a low voltage applied. Once the motor is coupled to the load, I suspect the motor will operate and come to a stop as it did before. If there is a problem, you could convert the heater power supply to a lower voltage DC. You would need to determine what value of DC voltage would produce the same current in the windings.

Can anyone explain why the motor may now operate in this manner[?]

The theory that explains why single-phase, capacitor-start motors are able to operate once the capacitor and start-winding are disconnected also explains why a 3-phase motor can continue to operate with a single-phase voltage source connected between two of the three motor terminals. I am unable to explain that from memory, but I will consult my resources and attempt to add that later.

Can anyone explain ... why a rewind was able to change how it operated?

"Details" appear to indicate that the motor only operated with power only from the low-voltage, single-phase heating power source with the motor un-coupled from the load. It was likely not the rewind that changed how the motor operated but the lack of any external load.

The following diagram shows the forward and reverse torque vs. speed curves that result from single-phase winding excitation. The net torque is zero at zero speed, but substantial torque is produced at higher speeds depending on the applied voltage. 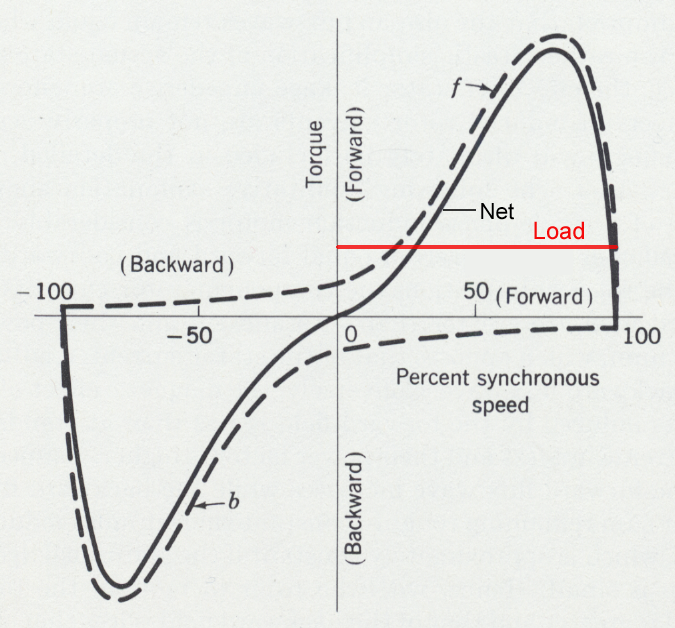 If one phase of the supply is lost while the motor is still operating, it will continue to operate at the intersection of the new (lower) torque vs. speed curve and the torque demand curve of the load. The motor will not start with a missing phase, but if it is somehow mechanically pushed it may start and accelerate as far as the low-speed intersection of the motor curve and the load curve. Also, if the motor has single-phase power applied while coasting, it may operate at that point.

This is similar to Charles' answer and is not a definitive answer but rather "ponderings on the subject that may prove relevant" (or not).

Induction motors require a "rotating magnetic field" to run.
Once the rotor is turning the difference in rotational speed amd the speed of rotation of the magnetic field induce voltages in shorted turns in the rotor which produce large currents and thus magnetic fields that attract the rotor poles towards the stator poles. In 3 phase motors the rotating field is produced by the 3 x 120 degree separated phase voltages, so "differnce frequencies" can be produced with the roor physically at rest. In single phase induction motors some "cheating is required to produce a secondary voltage with some phase offset relative to the main winding to produce an initial rotating field. Typically a capacitor is used to connect to a secondary winding with the overall LC phase shift providing the required phase offset.

This is a very low power level compared to likely bearing friction/ stiction, lubricant drag and some windage. It's easy to imagine that an older motor may well need more than this power level to 'turn over slowly'. It's also conceivable that a rewound motor has less mechanical losses. It may be that the rewound motor also had new bearings, improved mechanical alignment and generally lower drag forces. If more than one such motor is available for comparison, measuring the time taken to run down to zero speed on power off and no load.

Can you post a single line drawing of your control circuit? It would help with the quality of your answers.

It does sound like 'single-phasing' (3-phase motor running with loss of a phase), which Charles and Russell allude to, but their answers do not explain the removal of the fuse or the rewinding.

I do not have your answer, but a key component is this.

You must troubleshoot the problem. To be honest, I recommend getting someone with relevant experience.

Lockout motor at switchboard. Disconnect all terminals from your motor. Use an ohmmeter (DMM set as ohmmeter) and make sure each of the three phases (U, V, W) and heating coil of your rewound motor are electrically isolated. Check each phase to the chassis as well. This should of been done when the motor was rewound, but you have to eliminate possibilities. Look for infinity on all readings.

Reconnect motor. Keep motor locked out. Recheck connections between the three phases and heating coil with ohmmeter. Again infinity on all readings.

Edit your question with the results and it will help get you an answer.

For the following, use appropriate safety procedures. If you don't know what they are, you do need an expert.

Use a clamp-on ammeter to monitor current of 3-phase inputs individually as the motor runs and as you Stop motor. All 3 should go to 0 on Stop and all 3 will be approximately the same while running. Again post your results.