I want to switch a set of lights (LED) wired in (what looks like) series on and off very quickly using the GPIO pin on a Raspberry Pi. The lights can be found here:

The lights are driven by four AA batteries, so 6V in total. The box says that there are 30 bulbs at 0.06w each. I think this means that it'll be drawing 300mA.

Can I use a transistor to switch this or do I have to use a relay? Any recommendations for appropriate transistors would be greatly welcomed too.

So I splashed out and got myself a multimeter. I tested the current on the string and it's coming out at 12.4mA. If I take the wattage of the whole string as 0.06W rather than each bulb and the voltage as 4.8V (for rechargable batteries) then this ties in with my sums (12.5mA). Does this change things? Could I get away with a single transistor. Arbitrarily, would this work: http://cpc.farnell.com/fairchild-semiconductor/fdd5614p/mosfet-p-d-pak/dp/SC11192

Thanks again for everyone's patience with probably a very simple problem, just don't want to blow up my pi (or set my house on fire!)

I took a closer look and it looks like all 30 bulbs are actually wired in parallel. Each wire in each bulb is two wires which don't connect at the end and don't feed back in to the base of the bulb: 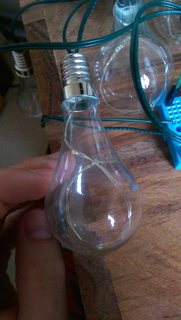 Each individual LED is quite small, I've taken a photo of them next to a standard LED for comparison: 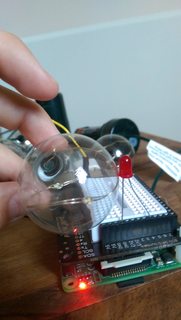 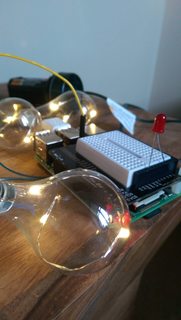 Does this make my measurement of 12.5mA over 6V more feasible?

I think the 'very quickly' rules out using mechanical relays. MOSFETs would give the most energy efficient switching (always useful for battery powered equipment.)

A high side P MOSFET switch.

It would also be possible to substitute Q2 for a suitable PNP BJT (change R2, 2k2 for 2 x 1k0 in series with base of PNP to midpoint.)

The grounds for the battery (0V) and the Pi must be commoned.

Assuming that the LEDs' specs aren't horribly misquoted, you will easily be able to find a BJT or power MOSFET to do the job. I would still measure the current of your LED strand, though.

If you use a MOSFET, make sure not to fall in to the trap of selecting a FET with a gate-to-source voltage requirement which your system cannot supply:

If using a BJT, I would make sure not to drive the base too hard: this requires choosing an appropriate base resistor. Check the GPIO current limitations for the Pi for further information.

Mechanical relays often require a higher voltage to operate (and higher current), and care must be taken to account for reverse voltage (using a flyback diode).

Solid State Relays (SSR's) operate at a lower control voltage, but have a higher cost than mechanical relays.

Both are good options when a transistor just won't do (especially in situations with high voltage AC), but this application will most definitely not require something that beefy.

Regardless, always check the datasheet of whichever method you select; relay or transistor. Again, I would highly recommend measuring your LED strand with an ammeter, before trying any type of control.

I hope that this helps.

Usually, the very first thing you need to do in order to design a switching circuit is to figure out the exact details of what you are switching. Now that you've updated things to say that the entire string is using \$12.4mA\$ at \$6V\$ operation, and given that the link you provided says that there are (10) bulbs and (30) LEDs in the string in its last picture, shown below:

We can now attempt to expand a little bit on what we think we know.

Are you sure that you measured \$12.4mA\$ for the entire string running at \$6V\$? I would tend to believe instead that these really are \$60mW\$ per LED. The other problem I have is that if each bulb has (3) LEDs in it, then how is the \$6V\$ applied? If it is a linear circuit, there is a resistor tossing away half the power and the LEDs are wired in parallel (possible.) If it is a boost circuit, then I suppose all three LEDs could be in series. But I'm having a seriously difficult time with the \$12.4mA\$ figure for the entire string. The power seems way, way too little.

If they are using a boost circuit in each bulb, it may be difficult for your meter to get an accurate current reading, too. I have fancy DMMs here that accurately measure RMS values. But without a scope or such a fancy device on your end, you may need to use super-capacitor to accumulate current for about 1 second and measure the voltage across it. But with the possibility of \$300mA\$ or so (in my mind, only, for now), you really would need about a Farad or so to buy yourself enough time to operate things by hand.

I'm still thinking that their picture is right, that each LED consumes \$60mW\$ and that the total string should be pulling an average of \$300mA\$, per your own computations. But I really don't know.

The main point here is that you really need to know what you have. If you are right, that they only use \$12.4mA\$ (in some weird universe I don't entirely understand), that's one thing and any small signal BJT is fine. If not, perhaps a different BJT would be appropriate with a rating of \$I_C\ge 300mA\$. Any chance you can dismantle a bulb and post up a picture of its insides?

I also apologize for writing an answer. I don't have an answer right now. Just questions. But I couldn't write all this as a comment. So here it is.

Not the answer you're looking for? Browse other questions tagged led transistors raspberry-pi gpio or ask your own question.

0
Looking for the right LED driver, roughly 4V, 1.5W or 3W, 10-20Hz
8
Replacing incandescent bulbs with LEDs, unexpected behavior
1
Can I add to the wire length of C9 LED Christmas Lights?
5
Automotive LED retrofit causing strange phenomenon
2
How to use a transistor to drive strings of LEDs from GPIO pins?
3
Considerations for converting a LED Bulb from AC to DC power
2
Why do my LED lights require a different voltage when they are hardwired?
3
My strands of LED Christmas lights are not polarized, and I don't understand how that works