I'm using the Infineon BTS117 smart low side switch to drive a DC-DC power regulator in my car. Here's the schematic of the switch board: 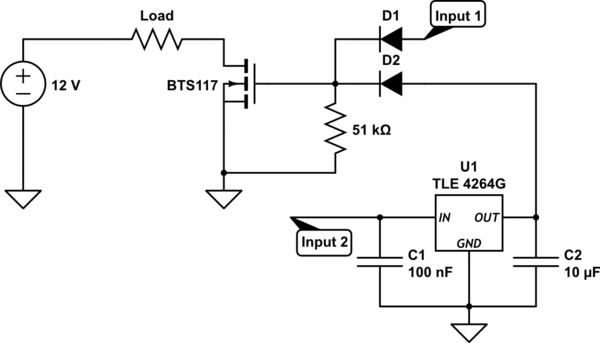 I don't think all the stuff around BTS117 is relevant to the issue, but then, I'm not an electrical engineer so I thought I'd better lay everything out.

I was testing the device in the car a few days ago and it was working properly, but I couldn't finish the work because one of the input leads was missing. So I took the device home and soldered the lead (just a small piece of wire). Next morning I put it back in the car, but it was no longer working. It wouldn't disengage the load with both inputs floating. As soon as I connect the positive terminal, the load (which, I remind you, is a power supply) would power up. The said PSU is able to work with as low as 4V input according to its specs.
I can't recall for sure (it was 2 days ago), but I believe I did try grounding the gate of BTS117 to the ground, and it made no effect.

I took the switch board home and tested it with a 12V 5W light bulb for a load. It again worked perfectly. Connected a milliammeter in series with the load and measured 0 mA with inputs floating at the same 12V across the load (and hence the switch).
Also tried measuring the channel resistance with inputs floating and power supply disconnected. My DMM has the upper limit of 2 MOhm and that wasn't enough for it to sense any conductance.

Any idea what can possibly be going wrong when I put the switch in the car? Why does it conduct when it should be off?

Update: I have once more experienced the faulty behavior, and this time the switch got considerably warm, i. e. it didn't turn on all the way and had decent voltage drop across it. I have disassembled everything and reassembled back again half an hour later; the problem went away and has not repeated since.

"It wouldn't disengage the load with both inputs floating"

The offset drain current should be <5uA. Assuming there are no shorts or semi-conductive paths, (given the 12V supply) the only way the BTS117 could be conducting is if it damaged.

The input rather ESD sensitive w/only 3k volts of protection. I'd recommended replacing it.

Not the answer you're looking for? Browse other questions tagged mosfet switches or ask your own question.

9
Why do my P-channel MOSFETs keep dying in this H-bridge?
0
Load Switch for controlling battery circuit power via MCU GPIO pin
1
30N06L N-channel mosfet switching heavy load interfering with micro-controller circuit
0
how to switch off multiple power source (+5/+12/3.3) in the same pcb
0
How to bypass minimal load limitation on a power switch?
1
Can I control the flow of a 12V power supply with a 4.5 volt power supply and a IRF3205 mosfet?
0
What could have caused my high-side MOSFET gate driver to break?
0
need help wiring a switch to go from 5v to 12v