Consider the simple circuit below: 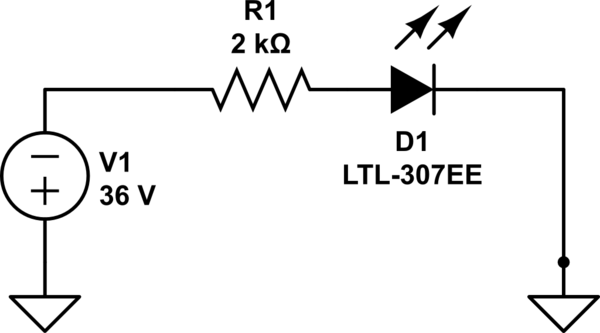 Does the applying of a reversed 36 volts to this circuit damage the LED? Knowing that the maximum current that could flow into the LED is 36V/2kOhm = 18mA (the LED can withstand 30mA forward current)

The maximum reverse voltage is 5V. Does that mean that the LED will actually blow if I applied say only a reversed 5.1V on the input?

EDIT: I actually tested the LED and it doesn't seem to be damaged by applying 30V in reverse(applied for several minutes). Also I connected an ammeter to measure the reverse current (Fluke 87V with uA accuracy) and it shows absolutely no current flow. So what's the deal ?

Yes, but that statement implies that at 18mA the whole 36V would be dropped over the resistor, and actual volatage over diode would be 0 (zero) volts. :) (I had to include this for newbies, that could be misguided by statement, even as it probably meant just that in no case current can go over 18mA.) For diode it does not matter what voltage you input to the whole circuit, all the diode feels is the voltage between its two legs.

Trouble is voltage drop over resistor is porportional to the current, so if diode blocks the current completly ... no voltage drop on the resistor, and the whole supply voltage lands on diode itself.

In reality actual voltages over diode and the resistor is the result of the equilibrium. Diode might pass some current in reverse ... if it is not destroyed in shortcircuit mode (usualy it fails open to open circuit), so not so much voltage gets droped over resistor.

BUT. But it really depends on the diode characteristics (which you seldom find in spects for range above stated max reevesre voltage, and many times not at all as graph for revesrse voltage (only reverse current at max rev.V).

I have 5mm amber LED with Vf of about 2.2V which I tested and blocks current completly up to 41V (did not use higher voltage source) (voltage drop over 2K resistor was 0 mV).

Red 3mm LED with Vf about 2V, let some current in reverse even before 5V and wih higher voltage it got worse fast. But after putting LED back in "proper" way, it works as usual again.

Most currious is 3mm BLUE LED (rated 5mA, 3V) which gave enough light to be clearly visible in lighted surrounding conditions even at 50 micro amperes (yes, 0.05 mA) originaly. (Now after much missuse (bellow) things are different). This LED lets even more current in reverse than it lets forward at the same voltage. I reversebiased it to first to 22V and later to 40V for few secconds, where it let 18mA through (remember 5mA rated) in reverse! When i forward biased it again it DID NOT LIGT. Dead? No, after first abuse, it took near 16V of forward voltage to let any current through (I monitored voltage on 2K resistor, to detect current) an light it, as it light, forward voltage returned to near original value, and subsequently started at similar voltage as usual. After second abuse (40V reverse) it took even higher voltage (over 20V) to start again forward biased, but Vf permanently dropped to about 2V, and now it takes about 2.5mA at Vd of 2.45V (Supply voltage to circuit 8.9V) to light it the same as it lighted at only 0.05 mA originally.

BTW, I noticed simmilar fast deterioration effect at some chaep red laser diodes run at only close to 20mA (it's rated current).

None of the tested diodes did light reverse biased (not even slightly), at any reverse current (even 3x rated current), and none was destroyed by high reverse bisas. Except last case blue diode, other exibited no harm I coould notice form high reversal.

The LED will definitely pass current in the reverse direction — nearly as much as in the forward direction. (Think of it as a 5-volt Zener diode.) This much current (and the heat that is produced) will definitely damage it, although probably not catastrophically.

The simplest solution is to put an ordinary diode in parallel with the LED, pointing the other way. This allows the reverse current to bypass the LED, limiting the reverse voltage across it to about 0.65 V, which is within its rating.

You can also use a second LED instead of a silicon diode, which will give you more light and reduce flicker, rather than letting the reverse current go to waste. The forward voltage of one LED will be less than the reverse rating of the other.

Here is what the datasheet says in the ABSOLUTE MAXIMUM section about reverse voltage:

This is completely clear and unambiguous.

If you are still confused, look up "absolute maximum".

I once saw an LED that is directly connected to mains 220V with only a 2W resistor in series. I saw it in a cheap UPS system and the LED indicated that mains is present. So that LED was actually blocking 220V. That LED is still functioning normally for 5 years now.

Many related posts here at stackexchange mentioned the datasheet being strict, with the LED having a much higher reverse breakdown voltage but with no reference

The datasheet of LTL-307EE provides another spec besides the maximum reverse voltage of 5V. It says that IR_max = 100uA when VR = 5V. In that sense, 5V reverse voltage won't damage the part for sure.

Then how to address the concern over even higher reverse voltage cases which are not specified by the datasheets? I think this website provides some useful design guidelines.

LEDs are available with built-in series resistance. Honestly, if you don't know the part number of the LED, this discussion is pointless.

Vr is the guaranteed voltage that the LED can take and not blow up. It doesn't mean it will blow up at Vr. A batch with the same number may tolerate more voltage. Another batch may not. But Vr is guaranteed.

Not the answer you're looking for? Browse other questions tagged led reverse-polarity reverse-breakdown or ask your own question.