Serial capacitors in electronic ballast of a fluorescent lamp

Recently I repaired one broken electronic ballast of a linear 30W fluorescent lamp. Now it seems to be working as expected, but I had to make some changes to it and I'd like to ask if you see any hidden problems I can get into due to those changes.

Here is the diagram. It is not exactly my diagram, but very similar and I hope fully usable here: 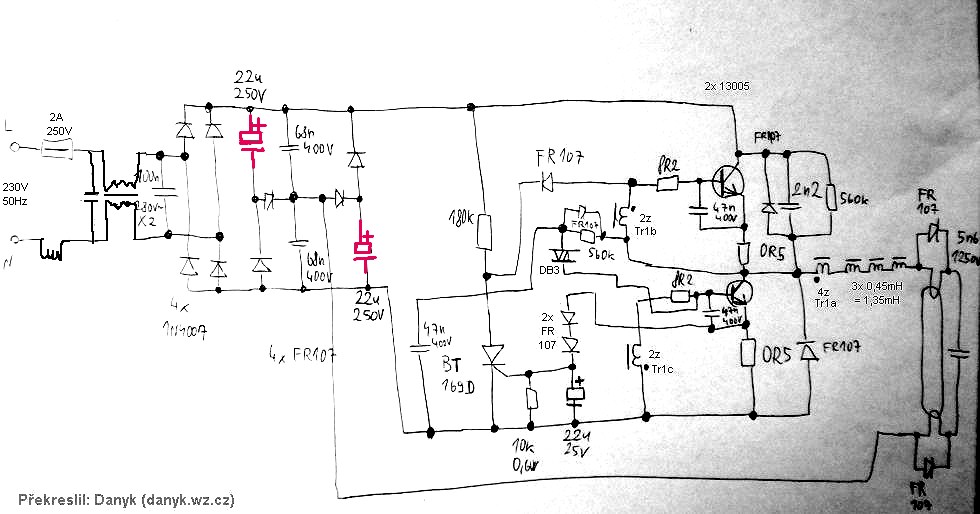 On left side you can see power source (230VAC, 1:1 transformer, diode rectifier). Look at those two (red) electrolytic capacitors in series. I assume they are charged to 162 volt only (Vpeak is 325V, so each cap gets 162 V only). The original caps were rated 15uF 250V, and I needed to replace one of them. I wasn't able to obtain the same for a good price, so I replaced only one of them with a 22 uF 250V. So now I have one old 15uF, and one new 22uF. (I cannot put there two 22uF, because they're too big. One old small 15uF and one new bigger 22uF can fit there.) My question is simple: What did I cause by this? Will there be problems?

Those caps are surrounded by a lot of diodes. I expect that normally the potentials around and between those caps are -162V, 0V, +162V. When I replaced one of them by a different one, I probably moved the center potential out of ideal zero. Does it matter here? (The capacitors are never 100% ideal, so I hope the ideal zero potential isn't required here.) I am affraid I don't understand how this strange rectifier actually work. According to the diagram, It seems to me that now one of the transistors work with the higher voltage, and the other one with a bit lower voltage. Or am I wrong? Maybe those two capacitors are discharged in parallel thanks to those diodes so it doesn't matter whether they ar absolutely the same or not. (Vpeak on both transistors is 325V, but when mains voltage goes down the transistors are powered from capacitors, and each of those capacitors have probably got a different charging voltage. This is all too compliceted to me...)

Note that the reason why there are two strange capacitors instead of one 400V one is probably just the space. Two smaller 250V caps can fit into restricted space, one big 400V cap woudn't fit there. Here is the real photo:

My second question: I also had to make one more change: The 0R5 resistors on emitters of each transistor are now 0R56. I am affraid I don't understand what I caused by this, if it's dangerous change or not. (Again, I wasn't able to obtain the pretty same resistors as were the originals.)

The fact is that the ballast seems to work perfectly now, and the tube nicely shines. :-)

Epilog: I still hope that thanks to those diodes, the two electrolytic caps are always discharged together in parallel, so it actually doesn't matter whether they are the same type or not.

I must have missed this when it was asked in January.
This is a well described question and Al's answer to part of his own question was very good. He subsequently deleted it, but hopefully it will get undeleted sometime soon.

I'll address the core questions first and then come back and talk about some clever circuit aspects.

A: Probably not.
When you charge two capacitors in series so that the same current fklows through both capacitors, as happens here, the larger capacitor will experience a smaller voltage rise. This will be very approximately in inverse proportion to their capacitance. The two capacitors are close in nominal value (15/22 =~ 0.7) Electrolytic capacitor values may vary more widely than this (depends on specification). The older capacitor has probably lost some capacitance with age. So, the older small one will probably have a higher voltage to start when charging finishes. This will offset the capacitor voltage midpoint.

However, as you rightly note in your deleted answer (please undelete), when the capacitors discharge they will be electrically in parallel bu=t behind diodes so that the somewhat higher voltage capacitor will start to discharge first and when the output voltage gets down to the voltage of the lower voltage cap the second cap will "join in" seamlessly.This will have some effect on capacitor ripple currents and the higher voltage MAY stress the old cap more, but overall it should work OK. Arguably, a new cap that is not the same as the old one should be at a somewhat LOWER capacitance so that it takes more of the stress. BUT should be OK.

This is Al's picture of the discharge process. Whichever capacitor is at higer voltage will discharge first.

Q: Those caps are surrounded by a lot of diodes. I expect that normally the potentials around and between those caps are -162V, 0V, +162V. When I replaced one of them by a different one, I probably moved the center potential out of ideal zero. Does it matter here?

A: As above. This is the heart of the Valley Fill circuit. The caps charge to ABOUT Vinpeak/2. All should be well enough.

Q: Note that the reason why there are two strange capacitors instead of one 400V one is probably just the space.

A: No. As above. this provides passive power factor correction by very substantially spreading the conduction period of the input diodes. It also provides Vsupply at half Vin peak during the valley period.

Q: The 0R5 resistors on emitters of each transistor are now 0R56. I don't understand ... if it's dangerous change or not.

A: This is OK. The emitter resistors are current sense resistors which provide voltage drive via the diode D1 D2 to trigger SCR1, which terminates the current switching half cycle via D3. I'd have to spend more time on this circuit to get all the nuances and I'm pretty sure it's not 100% correct, but it gives a reasonably good idea of what happens. Increasing the resistors to 5R6 from 5R increases the voltage across them by a factor of 5.6/5 ~= 12% so they will cause the circuit to turn off at very slightly lower currents causing very slightly lower brightness. You would be very unlikely to see the difference visually. 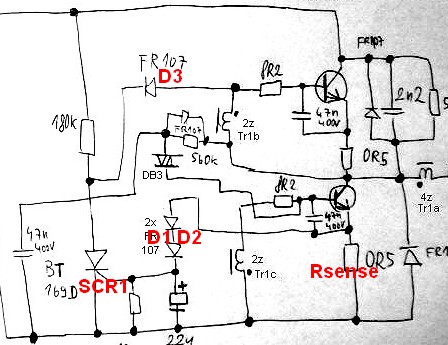 A Valley Fill Circuit is a piece of brilliant black magic from the beginnings of time that allows surprisingly good power factor correction into a resistive load - which a constant brightness high frequency inverter tends to provide.

Rather than continue to sing their praises - here are some references to basic and more clever versions and some discussion. Well worth acquainting oneself with if you have not met them.

No answers so far, so I am going to put my thoughts here...

Question 2 (resistors): I got a hint by one man outside this forum that they are just to protect the transistors and that 10% change of their values shouldn't be a problem. 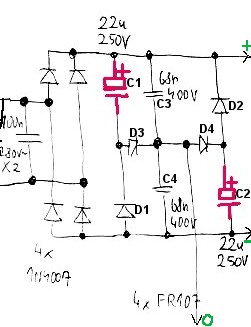 Now when the AC voltage is higher than voltage of the caps, the charging occurs. See next image: 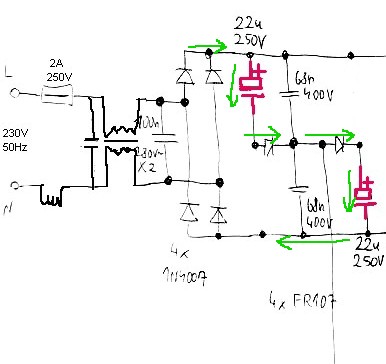 D1 and D2 are now disconnected and current flows through C1-D3-D4-C2 and charges the caps. Two electrolytes are never perfectly same so one of them gets fully charged sooner. But I think that diodes D3-D4 together with C3 and C4 caps ensure that centre potential is always in the middle, so C1 and C2 never get recharged to more than 160 volts. If C2 is smaller and stops charging sooner, C1 tries then to charge more, but its negative pole potential cannot go lower than potential between C3-C4. The same applies for C2, so both C1 and C2 finish the charging with the same voltage, although their capacities aren't the same.

When AC voltage goes to lower values, then the lamp circuit is powered from the caps. See next image:

D3+D4 are now disconnected due to reversed polarity and C1+C2 are discharged in parallel. If C2 is smaller and is discharged sooner, it is then protected by D2 from reversing polarity. (The same applies for C1 and D1.) The centre pole still keeps its central (zero volt) potential thanks to C3 and C4.

Summary: I am really not an expert on AC and complicated capacitor-diode circuits. But I hope this particular circuit behaves correctly even if the capacities of C1 and C2 aren't the same. (As long as they ain't overvoltaged etc.) I believe that thanks those diodes D1-D4 and capacitors C3 and C4 the centre pole is always in the middle (zero volts). (There is probably some unwanted ripple due to fast recharging of C3 and C4 and transfer of their power to C1 and C2 when the circuit tries to stabilize central pole voltage to the perfect middle point when charging C1 and C2.)

Not the answer you're looking for? Browse other questions tagged capacitor rectifier fluorescent-lamp electronic-ballast or ask your own question.

9
Ripple current in a linear power supply transformer
5
How to calculate a current being drawn by a full wave rectifier diode bridge?
5
What is the capacity of capacitors in this power supply circuit?

3
Fixing APC UPS buzzing noise
2
Run 12v Incandescent Bulbs off Fluorescent Ballast
4
Capacitor in a fluorescent lamp starter
1
How can a fluorescent lamp run without a ballast?
6
Is it safe to use series polarized capacitors to form non-polarized capacitors to be used for higher rated voltage?
0
Is it normal for the OC2 vacuum tubes to glow bright orange during operation & OA2 to flicker while running?
0
Can a fluorescent light electronic ballast fail and still supply voltage?
0
Efficiency or longevity issues when using 2 lamps on a 4-lamp fluorescent ballast?
0
Can an LED “fluorescent replacement” tube be powered without a ballast?