How do I make this LED flasher more sensitive?

I'm making a circuit which will change brightness level of an LED in tune with music. So far, this is producing some results, but I'm not very satisfied with it: 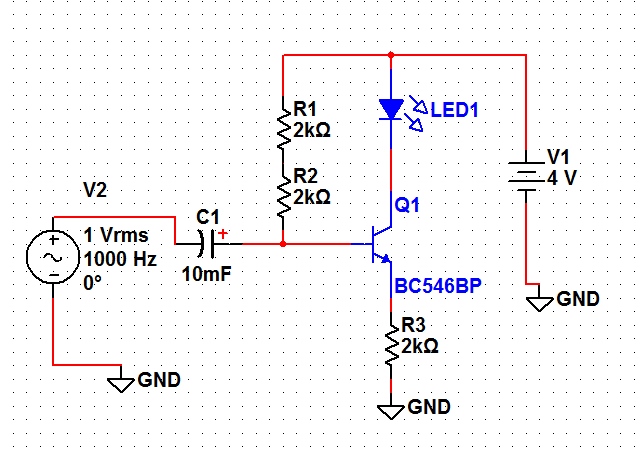 If it matters, the forward voltage of the LED is around 2.5 V.

The light output of the LED is good enough for me, but the circuit isn't sensitive enough for my taste. The AC source is the speaker port of my radio and the 10 mF capacitor is used to provide AC coupling. I started with a 100 nF ceramic capacitor (the idea came after reading the audio coupling capacitors question), but it gave almost no response. I tried with various other capacitors I have available and when I got into the microfarad range, it got somewhat better. Now I'm at 10 mF and it seems like 20 mF would be just right, but I'm supposed to make several of this devices and the 10 mF capacitors are just too big and expensive (especially since I'd need 2 per device) for this to work.

Right now I'm considering moving to BC546C which should give me higher \$ \beta\$ (420 minimum (up to 800) compared to 300 which I have in my transistor right now), but I'm afraid that it will make too big impact at the current of the LED and change its brightness level which is now just right.

So how do I make this thing more sensitive other than by throwing bigger capacitors at it?

Get a variable resistor / potentiometer.
Connect it from base to ground.

What this does is move bias point to an fro around transistor turn on point.
Lowering or removing R3 increases gain.
Adding capacitor across it does same thing.

You are not going to get a lot of (current) gain with that setup.

Since you (probably) don't need linear gain the dodgy biasing should be okay. To increase the gain a bit I'd try changing R3 to ~200 ohms and R1/R2 to a total of ~200k.

Not the answer you're looking for? Browse other questions tagged led capacitor audio transistors or ask your own question.

1
Charged capacitor doesn't allow impulses to pass
2
Understanding this LM317 LED Driver circuit
6
How does this transistor dual LED flasher circuit work?
0
Why is my LED less bright when activated through a vibration switch? How can I avoid this?
0
Can I somehow use one PWM output to set various LEDs to different brightness?
4
What resistor should I use after changing this LED from using 220v to using 5v arduino?
8
Ultra low consumption white LED flasher
2
How would this circuit work? Would the LED behave like a strobe?