Can a decoupling capacitor be too large?

For my project containing an ATtiny85 running at 32.768 kHz using an external watch crystal I thought I'd include a 1 uF decoupling capacitor near the MCU power pin for good measure. However, reading up on it it seems that most people recommend a 0.1 uF capacitor. Can using a too large value cap (e.g. 1 uF) do any harm or would it work alright?

The type is more important than the value- if it's a smallish (eg. 0805 or smaller) surface-mount ceramic part, there is no disadvantage to a larger value capacitor.

Compare the below two similar 0603 X7R Murata capacitors (top one is 1uF bottom is 100nF): 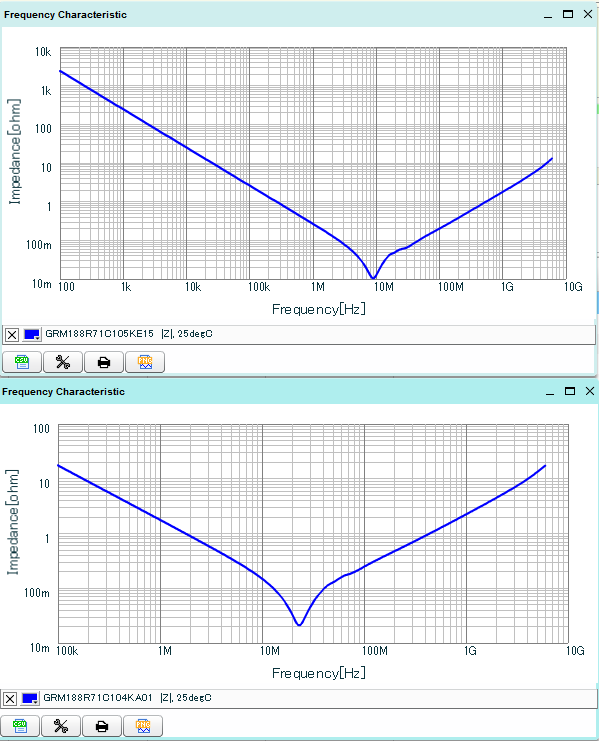 If you look at some reasonable impedance such as 1 ohm, the 1uF is < 1 ohm for 250kHz to 600MHz and the 100nF from about 1.8MHz to 400MHz, so the 1uF is better everywhere (a decent regulator will fill in the lower frequencies, and a sluggish chip like the ATtiny won't create any edges with higher frequency content to worry about) so either is likely fine.

You need to go onto the cap manufacturer's website and either download software or use web-based programs to get the actual behavior, it is usually omitted from datasheets in its full glory because there are too many possibilities. Note that the capacitance of the 1uF will actually be less because of the bias voltage which I didn't bother to set (it's just an example) but you should.

At high frequencies (more accurately, fast transition rates on the device pins), a smaller capacitor is necessary to provide a low impedance at these edge rates (to prevent internal power droop), although at really fast edge rates, capacitors operate above self-resonance anyway.

We do usually provide a bulk bypass capacitor (a few uF) somewhere close by, with the smaller value devices as close to the device power pins as possible.

See this answer for more details on MLCC self-resonance.

You might want to read up on leakage currents.

If you're running it on a 32.768 kHz watch crystal, chances are that you care a lot about long term average current consumption.

In my very limited research, the leakage current is in general higher in larger capacitors, although it mostly seems to relate to the actual construction technology.

A quick search for actual figures lead me to this article by muRata with a few hints. It shows that the leakage current increases by capacitance, but only lists values for 1 µF capacitors.

Only you can answer if such small amounts of current matters or not, and you have to look up a more representative value for your specific type of capacitor. It may be more important for supercapacitor applications than battery-powered applications.

As for whether the total amount of capacitance can be too big, that is a function of the power supply. A cap with low series resistance will absorb essentially all the current it can get until it is charged. If one were to connect a bunch of caps totaling 1000uF to a supply that was current limited at 10mA, then it would take 300ms seconds for the device's power rails to reach three volts, and during that time the cap would be drawing the full 10mA. If the supply could output 1A without difficulty, however, then the caps would charge to full voltage in only 3ms rather than 300.

Note also that if a device (or subsystem with its own filter caps) will frequently be powered on, used briefly, and then powered off for long enough for the cap to discharge, then all of the energy used to power the caps will be essentially wasted when the device or subsystem is powered down. Doubling the size of the filter caps would double the amount of wastage.

Think of the ATtiny as a variable resistor (dynamic load). All real world power supplies have source resistance plus the wire to the device, and some inductance from the wire and PS. If the ATtiny draws more current because more transistors switch on (this can happen in the ns time frame), it will cause a voltage drop from the resistance and inductance of the wire, which can be bad. So a filter capacitor is placed to keep the voltage constant, the ATtiny will draw some power from the capacitor for the short duration that it needs.

The ATtiny can be modeled as a resistor if you know the current draw, and the voltage \$ R=V*I \$ this resistor changes with the current drawn. You can also find out the source resistance of your power supply and model that too.

Now think of if you place a giant capacitor in parallel with the ATtiny, it will not be that much different from a small resistor. However it will affect the start up time of the circuit. If you put a 1F capacitor paralleled with the ATtiny it could take minutes to charge up depending on your supply! A 1uF should be fine. Keep in mind that capacitors also have series resistance which is not considered in this simple model.

In general terms, the smaller value cap is there because it has a higher self resonant frequency. At frequencies below that, it looks electrically like a cap. Above, it looks like an inductor.

Think of the larger caps are a tank to replenish charge due to things like peak current draw, and the smaller ones as being there to soak up the effects of short transitions (current pulses) and prevent their conduction to the rest of the circuit.

This isn't STRICTLY accuracte but it's an adequate rule of thumb.

YOU CAN HAVE TOO MUCH CAPACITANCE. However, it all depends on the type of power supply. In old fashioned diode bridge and a smoothing cap power supplies, the more capacitance you have, the shorter the diode conduction angle when rectifying mains. Short conduction angles in turn leads to greater peak currents (as the average remains the same the peaks must be higher when current flows for a shorter time). The effect of that is that you can exceed the peak current ratings on the diodes and cook them.

These days with modern switch mode converters, such a thing is very rare and generally something you need not worry about.

Specifically with something like an ATTiny runnig at a few kHz off a watch crystal you have nothing much to be concerned about. (An ARM running at 1 GHz would be a different matter and far more care and attention would be justified).

Not the answer you're looking for? Browse other questions tagged microcontroller decoupling or ask your own question.

6
Self resonance frequency for MLCC capacitor