How in the world does this prank pen work? [duplicate] 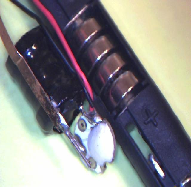 The above image is a literal layout of the circuit. The 50k load is the user's hand. Both switches are closed upon pressing the button. The switch is before the capacitor. This is based on closely observing the circuit and is 100% accurate unless someone can prove otherwise. I tested this with varying capacitance and inductance values and was unable to induce a significant current in the load for more than dozens of miliseconds. When testing I moved the virtual switches from the ground to the positive wire. When I move the switch after the capacitor I can have a long lasting current through the load, but the voltage/current are very low.
Edit: It is beginning to appear as if the white piece (Shown as cap above) is an active component/IC. There may not even be a capacitor in this circuit.

1. The device behaves as follows: When the pen is held and the button is pressed a mildly painful electric shock is felt. After about 3 seconds, the pain gradually decreases until it is not longer felt. Upon releasing and pressing again the full shock is felt once again, even if only released for the slightest moment. The button and grip are the electrodes.
2. It uses 4 1.5V button cells in series (with high internal resistance)
3. The shrink wrapped component is a tightly wound step up transformer. The secondary uses extremely thin wire. It apparently is an autotransformer, as it has three leads and is wrapped around one ferrite column.

1. I measured the frequency on the primary with a primitive oscilloscope. It was equal to a couple hundred hz, which is reasonable considering the pain of the shock.
2. If the frequency is ~200hz, the capacitor (if the white component is a cap) would have to be over 100uF non polarized. This may be possible as I have discovered high capacitance low voltage smd caps. The primary inductance would have to be several mH.
3. The turn ratio would (I believe) have to be at least 1:90. This surprised me because I read that most autotransformrs have a low ratio. I then encountered higher ratio custom ones (which is more reasonable if varying wire gauges are used).

1. What the white component is. Is it merely a capacitor? Does it serve other functions?
2. How on earth does this circuit work. It seems so simple and then again I can't explain or emulate its behavior accurately in a simulator...