How do I describe this circuit?

Yes, this circuit diagram is correct. No, I did not design it.

How do I describe this circuit in words? I thought about "a switch and light bulb in parallel, instead of series" but the circuit is so bizarre that I want to make sure what I am saying is unambiguous.

I cannot insert a schematic/picture/diagram/drawing, and I have a fairly tight word limit.

If anyone knows the tags for this question, add them.

EDIT (due to interest from the comments): The circuit was made by my 3rd grade teacher for an electricity test (when she thought the questions from the curriculum were too hard for us...)

EDIT 2: No, this is not a fancy NOT gate. The question was "What will happen when the switch closes" and the teacher-accepted answer being "Lightbulb turns on"

How do I describe this circuit?

Do you want subjective opinion? Or technical description?

Subjective opinion would be: this circuit is badly designed, no matter what problem the designer tried to solve.

Technical description would be: it is a battery killer with stand-by indicator.

The best description for this circuit is "How to NOT control a light with a switch." This was clearly not designed by anyone with even basic knowledge of electricity. Or else it was incorrectly "interpreted" or reproduced by someone with absolutely no understanding at all.

Obviously, closing the switch will put a DEAD SHORT across the power supply. That is NEVER a good idea, and can be quite dangerous in many cases.

Clearly, the light bulb (or LED, it makes no difference!) turns OFF when the switch is closed. Anyone who thinks otherwise has zero understanding of electricity and should not be attempting to teach others. In any grade.

This circuit will allow you to observe how the supply source reacts when short circuited. Also tests the switch under extreme fault conditions as well. An expendable person should be deployed to operate the switch. 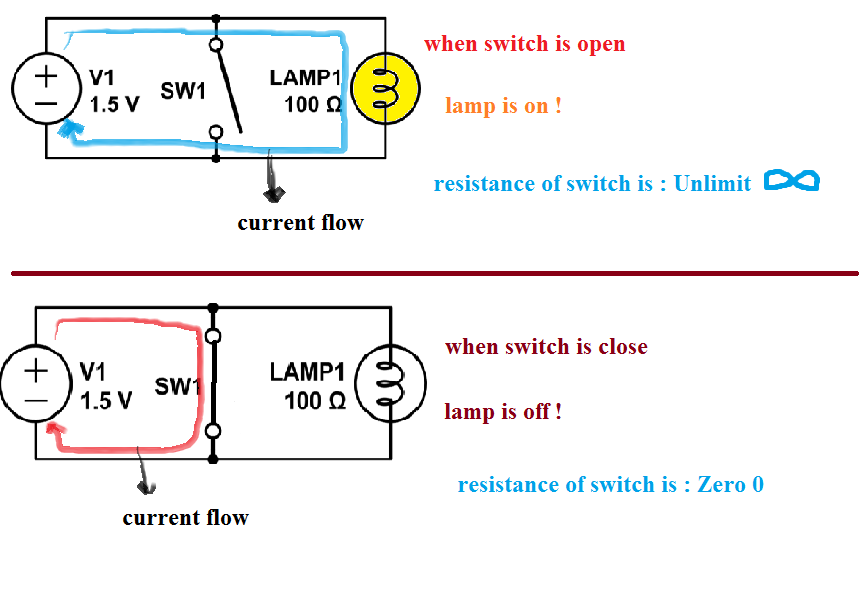 and something about the battery :

I'd describe it as: Switch and bulb in parallel connected to a voltage source.

I think the voltage source should be mentioned (without it you cannot reproduce the circuit, although most would think implicitly that a voltage source is there).

And I don't think a description should contain any hint that this is a quite useless contraption, stuff in school is often not useful or practical but only a test to see if the concepts are understood. An explanation of how it works can contain all the comments on how dangerous and useless this might be. However the solution is wrong - like pointed out by everyone else, if the switch is closed the light will go out.

I've seen something similar while restoring my old Vespa. This answer is more of a try to explain why the teacher might ended up with a wrong circuit.

The generator of a Vespa works like a Dynamo on a bike, so it acts like some sort of current source. And the horn was controlled by a switch which was hooked up in a similar way.

If you press the button (break the short), the current goes through the horn and you get a nice sound.

In the old schematics, there was no nice current source and the switch was also not depicted like in this schematic but as a normal switch. While analyzing the whole thing I was baffled at first until I drew a complete schematic and measured the switch to realize it's normally closed and pressing it does not close it but open it.

So maybe your teacher came across some circuit like this and in an attempt to make it easier, the circuit was changed in a way to make it wrong and the switch being normally closed was not clear. Most people think of pressing a button or flicking a switch will make a contact.

I would describe it as a:

Or if you want to describe the circuit construction through words:

Though, you could also describe it as:

If you short an alkaline AA 1.5v battery, it's probably not going to heat up as much as you think, especially that it's a small BATTERY which is current limited.

Not the answer you're looking for? Browse other questions tagged schematics short-circuit bad-wiring or ask your own question.

9
Why is the capacitor short-circuited in this example?
3
Circuit Considerations
1
Schematic Question with electronic button
0
Use an ATtiny85 instead of an ATtiny13 - Where do I place the XTAL?
1
Does this prototype match the schematic?
0
Simple security Alarm incorrect schematic diagram
0
Switch between two serial ports
0
Would this cause a dead short?