We are using star-delta starter with delay of about 30 second from star to delta.

We are seeing around 40 Ampere when machine starts in star, but that amperes jumps to 130 ampere when the starter switched to delta, which trips the whole circuit in six to ten seconds.

How do I diagnose such behavior ? As I understand, the ampere should be reduce when it is used in delta configuration.

If the rated voltage for the delta connection is applied to a star-connected motor, the resulting torque and current are about one third of the characteristic torque and current for the delta connection. As a result, at the transition from star to delta, the change in current and torque is about a three times increase. Therefore, an increase from 40 to 130 amps is within the normal range.

If the current doesn't drop to a normal running current in six to ten seconds after the transition, the motor is not adequate for the load, there is a problem - possibly an unconnected phase in the delta connection, there is a mechanical problem with the load or some other problem.

In this case, there is very little star-connection acceleration torque available between 40% and 70% of full speed. If the load torque was a little more, or the motor torque a little less, the motor capability torque curve would cross the load torque requirement torque curve and the motor would not accelerate the load to a higher speed until the star-delta transition. The load and motor curves are shown as crossing at a little above 90% of rated speed, a little below the star-delta transition speed. 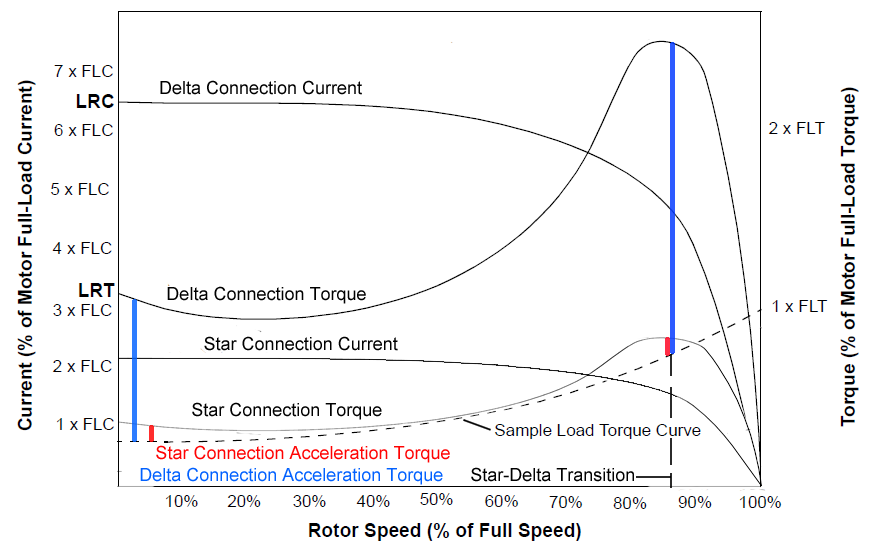 First look at the motor name plate, (in star delta starters check the six leads connected properly to their terminals). If the delta formation is improper, the motor will first start and run ok. But after it changes over the motor will stop if the contactors are in closed position in the starter. Place the relay below the delta contactor while after the change is over.

If the motor connection plate's U1, V1, W1 side is ok, may be U2, V2, W2 side have some mistake. In that case, the would start normally but after motor goes into delta, it would trip the circuit breaker because of high current.

Perhaps your motor is designed for example 230/400V delta/star. When you switch the motor on in star connection, it has already the nominal voltage. P=0.4kV*1.73*40A = 27kW, which is already the rated power of described motor. For example a delta/star motor of 400/690V, suitable for star/delta starter should have a power 1/3rd in star connection, compared to nominal power when delta connection is established, so something arround 7kW.

But it hard to say without any nameplate data.

Not the answer you're looking for? Browse other questions tagged motor three-phase induction-motor or ask your own question.

2
Why starting current in star-delta starter becomes 1/√3 times that of DOL starter?
2
Installation of an AC Drive on a Mixer - Help
0
Star Delta Motor Starter, at higher ampere in Delta Configuration
1
Star-delta starter
1
How is a higher torque achieved in a single phase cap-start cap-run motor?
0
Does the motor speed change with the fully automatic star(wye)/delta starter?
0
Induction Motor Poles and Drive Configuration
0
Star-Delta starter connection of motors