I'm trying to use a Raspberry Pi Zero to control our apartment unit's buzzer phone (the thing that lets people at the building door in).

There is a momentary push-button that completes a 12VDC circuit, causing the door to be unlocked. I've attached leads so that when I touch them together, it does the same thing as pressing the button.

So far I've tried two approaches to wire this up to a rasp pi.

The first was with a single NPN transistor controlled by one of the +3.3V GPIO pins. Verified the circuit concept by controlling a simple LED circuit with the GPIO high or low. Then I tried it with the buzzer, hooked the +12V from the buzzer to the collector and the 0V to the emitter. This didn't work, and caused some buzzing in the phone.

Next I tried this Opto-isolator breakout https://www.sparkfun.com/products/9118 in hopes that isolating the two systems would be more straightforward and eliminate the possibility of a ground loop. I also tried this with the LED proof-of-concept circuit. It was noticeably dimmer when going through the opto-isolator vs. not, and it didn't end up working out with the buzzer. I'm thinking it introduces too much resistance.

If you were doing this, what approach would you take? Is there any way I can modify my approaches to make something work?

You mention buzzer phone and that it completes a simple 12VDC circuit, but then also mention causing 'buzzing in the phone'.

Reading between the lines of this I assume that you mean you have an intercom system with a door unlock/release button on the handset and a unit at the door entry ?

The short answer if so is, use a relay it is by far the easiest option.

There are several possible scenarios with an intercom system.

Given you say you caused buzzing by connecting a transistor I suspect that it may be something like 3, where you are affecting your handset's circuit in unexpected ways and if so it may be difficult to determine how to connect a transistor without knowing the circuit design of the handset.

Traditional doorbells typically work on AC, stepped down from line voltage (120 VAC in the US) to 10-20 VAC. If true in your case, this would explain why an NPN transistor didn't work (only conducts current one way). I like Roger's idea of using a relay as the simplest way that's likely to work. But if you wanted to use a semiconductor, a TRIAC can be made to work. Here's a circuit I found with a quick search on 'low voltage triac' that might serve your purposes. 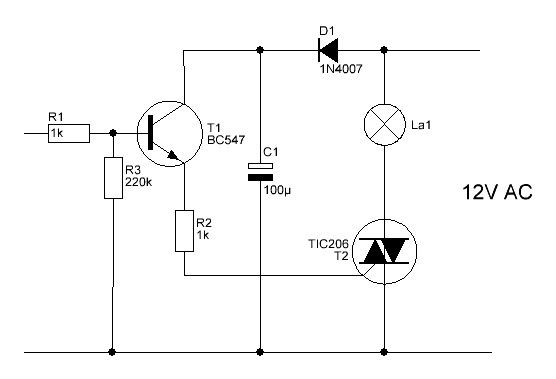 You could consider a 3.3VDC relay. You'd need to drive its coil and this would mean a single BJT circuit. Those relays are a couple of dollars, plus shipping. But it would work, for sure. And it's a very good option, actually.

But I think another possibility is that your BJT wasn't sufficiently driven by your I/O pin to hold in the door lock solenoid. Instead, it's likely that you oscillated because you didn't have enough current (or voltage) available.

Since you don't provide ANY details about your door lock solenoid, other than there is an adequate 12VDC source for it, let's just do a little over-kill with BJTs and go with that. 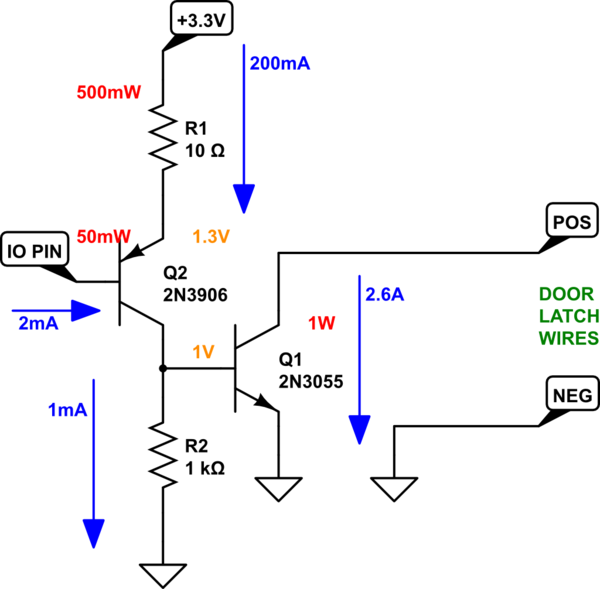 In looking up door lock solenoids that run off of 12V, I found that at least some of them require about 2.6A in order to operate. So I'm going with that as an educated guess about your needs. Frankly, I think the above circuit will almost certainly work for you. But \$Q_1\$ will probably drop about \$400mV\$. I don't think that will be a problem for you, though.

The above circuit is designed to use the absolute minimum of parts, if you aren't using a relay (which as I said above, and which Roger wisely mentioned in his comment.) I've added the power requirements of each part, so you can make sure you get sufficiently rated parts. (The 2N3055 is already rated way more than you need, so just use it without question.) For example, \$R_1\$ will burn about \$500mW\$, so you should buy one that is rated for \$1W\$, at least. \$Q_2\$ won't be a problem. Even a TO-92 part will work find there.

You might also measure the current when you switch your latch. That information would help a lot in dialing in this circuit to fit, better. But I think the above circuit is overbuilt enough that it will do the job.

And I'm curious. How is the Raspberry Pi going to be better than a human being pressing the button to let someone in? Which adds another question. Would you prefer a circuit that the Raspberry Pi triggers, but where the circuit itself times the duration and then automatically removes the power so that the door is no longer unlocked? (Would be very simple to add that capability.)

Not the answer you're looking for? Browse other questions tagged transistors switches raspberry-pi opto-isolator or ask your own question.