I am driving an inductive load from a microcontroller using a MOSFET. I have a current sense resistor in series with the load. I don't have much experience with transistors (should have paid more attention in school!) so I'm trying to implement the circuit using both an NMOS and PMOS transistor.

Here is the circuit with the P-Channel MOSFET. V1 is a 32 kHz PWM signal with 50% duty cycle. Since the current sense resistor is connected to ground, I can easily measure the voltage using a non-inverting amplifier. 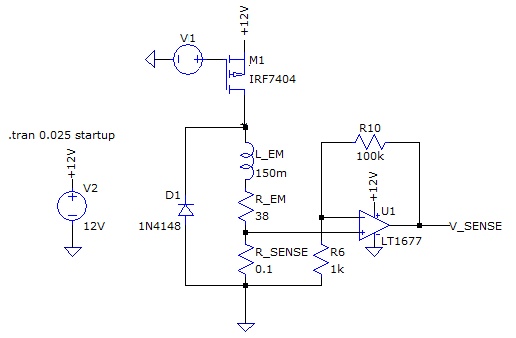 As the simulation results, the circuit does exactly what you expect; the voltage across the current-sense resistor tracks perfectly linearly with current in the inductor.

Here is the circuit with the N-Channel MOSFET. V1 is a 32 kHz PWM signal with 50% duty cycle. The current sense resistor isn't connected to ground so I use a differential amplifier to measure the voltage across it. 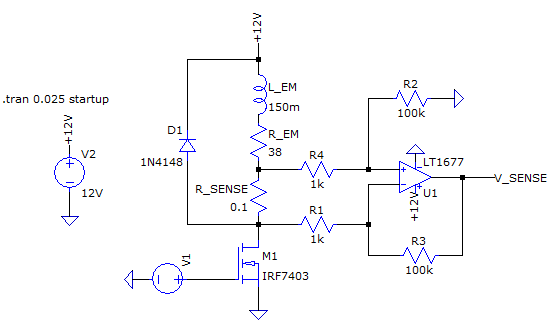 The behavior of this circuit is not what I expect it to be. The current through the inductor is much lower than the PMOS topology and V_SENSE is a mess.

Here is a zoomed in version with the PWM signal V1 included (shown in RED).

The 'noise' you see on the sense output is caused by the the op amp's inputs exceeding their common mode range. But how can this happen when the op amp has rail-to-rail inputs?

When the the FET is turned off, the inductor tries to maintain any current going through it. To do this it generates a voltage that goes above the power supply voltage. D1 limits this voltage rise to about 0.6V, while recirculating current through the inductor. During this time the op amp's inputs are driven to about +12.6V, 0.6V above V+ (which is very bad because they are rated for an absolute maximum of 0.3V beyond the supply rails).

To solve this problem, relocate the sense resistor to the other end of the inductor. Now the inputs will stay just below 12V, and the op amp should work properly.

Not the answer you're looking for? Browse other questions tagged pwm nmos inductive pmos or ask your own question.

11
Voltage spikes when driving DC motor with N-channel MOSFET
3
Switching supply burning mosfets, what is happening?
1
Half Bridge with dual powre supply and two N-channel Mosfets?
2
Turning an NMOS with substrate terminal into a PMOS
1
What happens to a MOSFET if i apply voltage between Drain and Source leaving the Gate floating?
0
N channel MOSFET not turning on under inductive load
2
Driving inductive load from IC with MOSFET
1
How to switch dummy load circuit on/off with pwm?
2
Reverse-polarity protection P-channel MOSFET