Why do receivers have a choke but transmitters don't?

Here's a receiver I found on the web:

And here's a transmitter:

Why do receivers have an inductor specifically designated as a choke (RFC) in their circuits but transmitters don't?

The purpose of a Radio Frequency Choke is to 'choke' ie. restrict radio frequencies from getting into parts of the circuit where they are not wanted. It does this by making use of the property of inductance, which causes the choke's impedance to increase as the frequency increases.

RFC's are not restricted to receivers (transmitters often have them too) and not all receivers use them. Whether an RFC is necessary depends on the particular circuit configuration and how the designer decided to implement it.

The RFC in your superregenerative receveiver actually has two jobs. As well as stopping RF from getting into the audio amplifier, it also raises the impedance at the Emitter of Q1, so the signal from the antenna won't be shorted to Ground by the 0.001uF capacitor (that capacitor is required to remove the ultrasonic quench frequency which is used to maintain superregeneration).

Your example FM transmitter does not need an RFC because audio is fed into the Base of Q1, which does not have any RF on it (ensured by C8, which shorts any RF present to Ground). L1 could be considered to be an RFC, except that in this case it forms a tuned circuit in combination with VC1, C9 and C7.

However, many transmitters instead use a Pi filter between the output transistor and the antenna, and therefore do require an RFC to stop the RF signal from being shorted out by the power supply. Here is an example:- 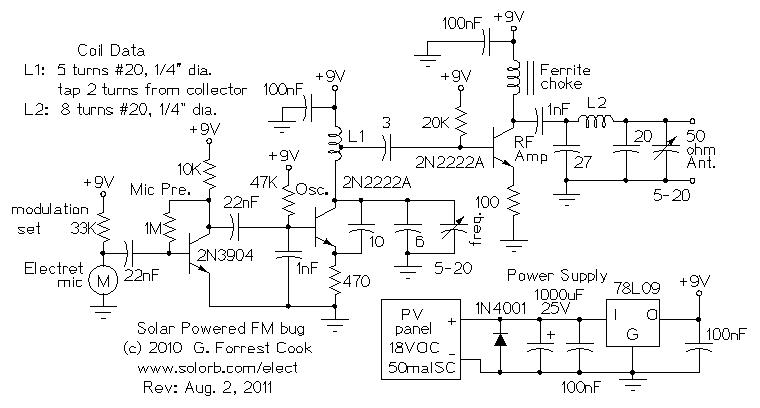 Why do receivers have an inductor specifically designated as a choke (RFC) in their circuits but transmitters don't?

Your assertion is incorrect.
Chokes / RFCs are used in transmitters and receivers when the designer thinks they are appropriate. Providing a single example of each does not make your point well.

The purpose of an "RFC" is to block the passage of RF energy but to allow DC or low frequency AC to pass essentially unimpeded. This will never be achieved perfectly but the (usually) large difference in frequency of audio and RF means that an unductor can have a large impedance at RF frequencies and minimal impedance for audio, and also have a low DC resistance so DC current causes minimal voltage drop.

Many transmitters use an RFC to feed DC to the "final" amplifier while blocking RF.

Here is a classic "RF final stage with choke" diagram.
12 VDC is connected to the transistor collector via the RFC.
The RFC prevent RF "escaping" into the power supply.
This circuit is intended for 88-108 Mhz operation.
At say 80 Mhz the 1 uH RFC has an impedance of about 550 Ohms.
The following 0.1 uF capacitor on the 12V supply has an impedance of about 0.02 Ohms so the RF reaching the 12V supply is "divided" by a factor of about 0.02/550 = a factor of about 25000. (It's more complex than that, but that gives a guide. )

A radio frequency choke is a way of providing a low DC impedance to a circuit node (possibly to allow DC current to flow) whilst simultaneously ensuring that an RF signal present on that node does not become significantly attenuated. The RFC works across a wideband of frequencies but at a high enough frequency will become a resonant parallel LC circuit due to its parasitic capacitance. At higher frequencies it will progressively behave as a capacitor: - 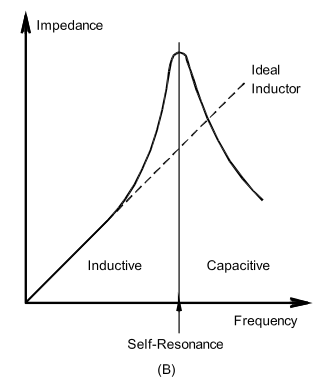 Compare this with L1 in the transmitter circuit - it is tuned into parallel resonance because of VC1 and C9 but, other than that, it behaves exactly the same as an RFC - it allows DC current to pass to the BJT (Q1) and offers a high impedance to RF signals (on the collector) at the operating frequency. It will (should or must) have a self resonant frequency (due to parasitic capacitance) significantly higher than the operating frequency of the circuit so that tuning with VC1 and C9 is not compromized but, other than that, it is a RFC.