Connecting a powered MCU to an unpowered component

If both MCUs have power I can configure P2 as input and it would seem that the high impedance will prevent any damage from occurring. But what if the transistor T1 is turned off? Extrapolating from what I found during my internet research it would then seem to be unwise to set P1 as output low, since this would cause MCU2 to start pushing a substantial current through P2, possibly powering up MCU2 in the process.

Assuming the above is correct, there are still several other possible configurations for which I could find no clear answer. Thus, under the assumption that the transistor T1 is off, my questions are:

If my questions do not have a general answer, please assume MCU1 is ATtiny13a and MCU2 is ATmega328p. 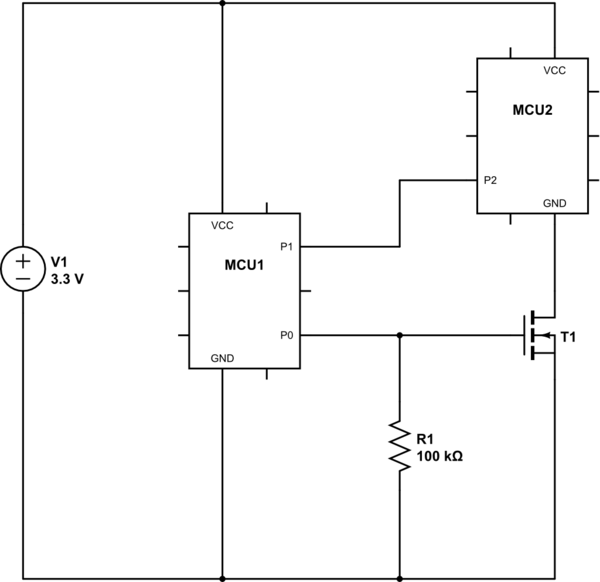 Worst case, output low, you power the mcu through the master, and it could cause too much current leading to a rise in the masters low level output voltage, or burning out both pins if current is too high.

Or use a series resistor between both pins to limit any current between them. A 100 kohm resistor should be sufficient.

What would happen if P1 is set as input high?

The pin (or any other pin on P2 at GND level) will reverse-power the chip. The deblocking caps will charge up and at some point the chip may start running - at low voltage level (= brownout) conditions. This may erase/modify parts the flash content, if the brownout reset was disabled.

This could happen on all I/O pins on P2, which is why you usually switch the VCC off with a p-channel MOSFET.

If you want to save power consumed by MCU2:

Not the answer you're looking for? Browse other questions tagged microcontroller power or ask your own question.

3
Connecting powered digital IC to unpowered
0
General Questions about PIC24 MCU Input and Output Pin Impedance, Voltage, and Current
2
Power Mosfet design issue
5
What happens when two digital circuits are connected and one is powered but not the other?
3
MCU getting powered up through GPIOs
11
UART pins to unpowered MCU?
0
8051 Open Drain Operation
1
How to avoid input floating ports on a microcontroller?
28
Due to overcurrent, shouldn't I be extremely cautious when setting an I/O pin as Output?