Skip to the question below if you don't care about the details ;)

The bottom half of the backlight in my TV went off so I opened it up to see if I could fix it. I found four of the 7 bars of LEDs were not working and narrowed down the problem to one of the bars. There were two bad diodes on the bar(D1,D2 in image attachment below) so I tried replacing them with two that I took off a computer motherboard. All four bars that were not working before lit up but only the last five LEDs on the bar with the replaced diodes were lighting. After testing the individual LEDs it turned out that L1 was dead and the two "new" diodes I put in was also bad so current was only flowing through the two bad diodes in reverse and lighting the last 5 LEDs. I removed D2 and a bypassed L1 with a piece of wire and now all LEDs are lighting except the bad LED 1. What was also strange was that one bar was affecting 4 bars even though each bar has individual positive and negative traces and wires going to the circuit board behind the TV.

Question: What is the purpose of the diodes D1-3 in this circuit because they seem pointless to me? I just want to know if it would be safe to leave the diode section disconnected with the bypassed L1 until I can find a LED bar to buy. Also would it be safer to bypass L1 with a normal diode than with the wire?

Close up of diodes D1 and D2(L BB and T BB markings) Can anyone identify them from those markings? I checked SMD code BB and it seems to be a Zener diode but I'm not sure. 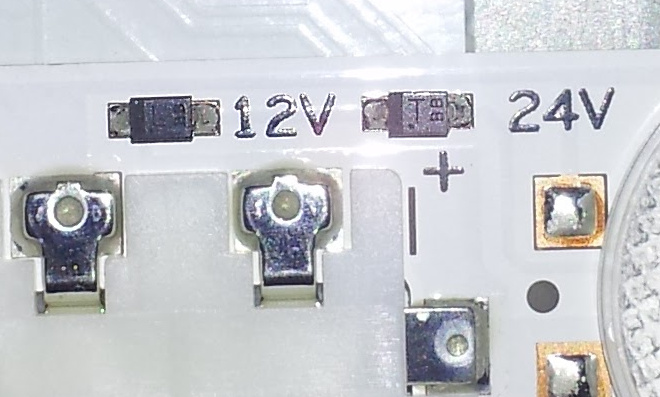 The diodes are there because LEDs can't handle very much reverse voltage. Common white LEDs have a forward voltage around 4V while the maximum reverse voltage can be as low as 5V.

Suppose the driving voltage can become negative, then the LEDs would be reverse biased, have a high impedance, and -without the diodes- no current would flow. In that case the (now negative) supply voltage may become higher than it would be in the forward direction, as it is essentially unloaded. There is no way to tell how this reverse voltage will distribute over the LEDs; One LED may take most of the voltage and fail.

The (protection)diodes "short out" the high reverse voltages over the LEDs to protect them. I think you should not leave them out.

From the schematic, they are conventional surface mount silicon diodes. (Surface mount from the picture and silicon because of the voltage) Also if they were zener diodes they would turn on (short out) on a positive voltage over a certain amount, shorting out the leds in the first place and stopping them from lighting.

Not the answer you're looking for? Browse other questions tagged led diodes tv backlight or ask your own question.