Why are these instrumentation amplifier circuits equivalent?

I am confused about the circuit of an instrumentation amplifier. In class we solved the following example: 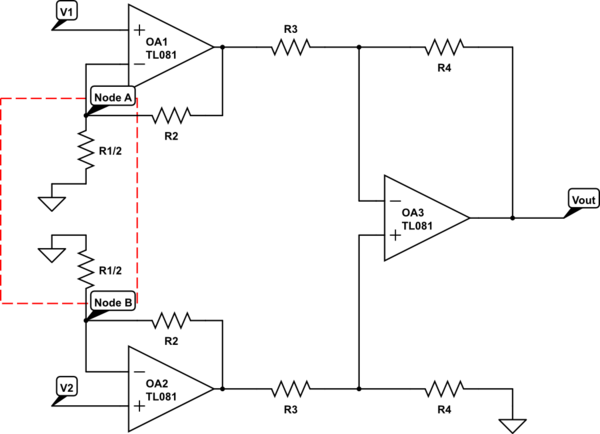 No big deal; with negative feedback we say that V+ = V- on the op-amps and find the voltage using KCL. However, the professor waved his hands and said due to symmetry, it is equivalent to the following circuit: 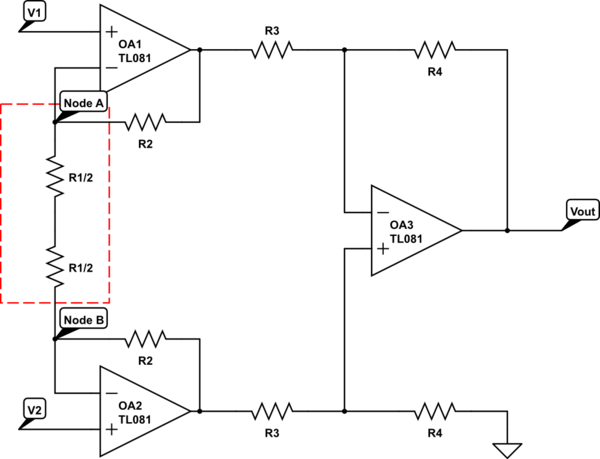 The difference is that that ground is removed and the two resistors are connected. I don't understand how this would be equivalent. Current would flow from node A to node B or vice versa. It would completely change the calculations. I've been working through the equations and I get an ugly mess of equations, not the elegant solution: $$\frac{R_4}{R_3}\left(1+\frac{R_2}{R_1/2}\right)(V_2-V_1)$$

My question is, why does this work? Why doesn't connecting the two resistors change everything like I think it should?

As this is pretty straight forward I won't go into it any more. Now we want to show that connecting the two half-resistors will yield the same result: 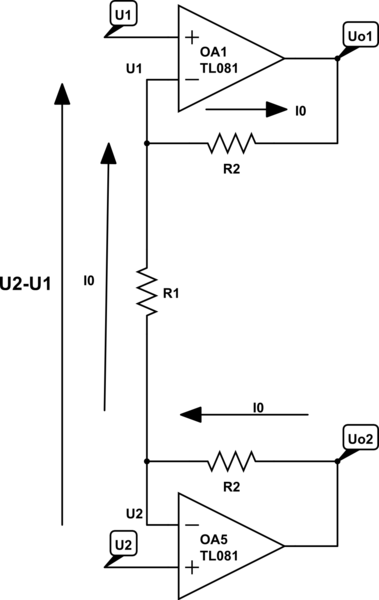 Which is the same solution as for the first circuit. So you're right. There is a current flowing, but it's proportional to the difference between \$U_2\$ and \$U_1\$.

Edit: As it's coming up in the comments, the voltage between the two halves of R1 in the second circuit is not 0V. 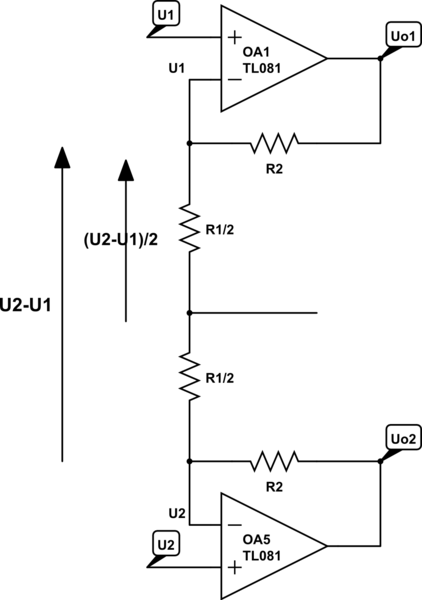 which is the average of the input voltages. Also note that \$U_{o1}\$ for a given input voltage is different between connecting the resistors together and grounding both. It's just the differential output that's the same.

Remember we calculated \$U_{o1}\$ and \$U_{o2}\$ for the grounded resistors version in the beginning and they were only dependent on the respective input voltage. However, with the connected resistors we get:

So while \$U_{o2}-U_{o1}\$ is the same in both circuits, the connected one has output voltages in the first stage that are dependent on both input voltages. The very important advantage is that only the difference between the signals gets amplified in the first stage. Since real opamps have rise times and especially supply rails that can be hit even with a small differential voltage if both voltages are relatively high. Here is a plot of the two different circuits at 1V differential voltage and U1 sweeped from 0V to 10V. As you can see, the grounded circuit hits 30V and more which could easily be above the supply rail while the differential circuit is well balanced. 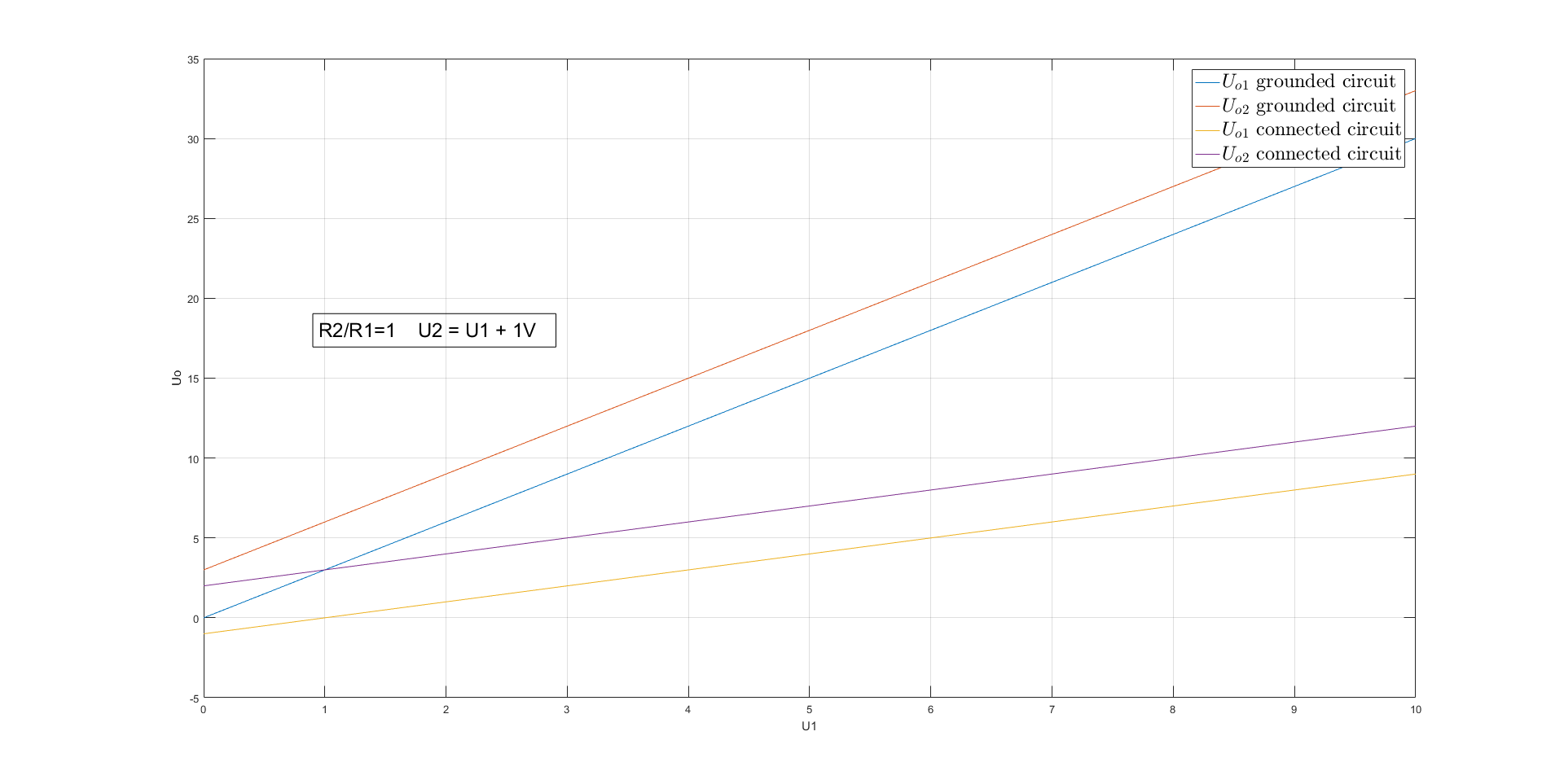 To make the analysis tractable lets start with the assumption that all the components are ideal. We can consider the affect of non-idealities once we understand the basic behaviour.

For a purely common mode input (\$V_1=V_2\$), the internal behaviour is somewhat different. In the top circuit the two inputs are amplified separately by the first stage. In the bottom circuit we can see that the voltages in the top and bottom halves are the same and therefore there is no current in the gain resistor and therefore the first stage has a common mode gain of unity.

In the ideal case this change in response of the first stage to common mode inputs has no affect on the final result, because the second stage removes all the common mode anyway.

Now we understand the ideal case lets get back to reality and understand why the second version is so much better. Lets assume that our goal is to use a high gain (say g=1000) to detect a small differential signal (say 1mV) on top of a large common mode signal (say 1V). Lets also assume that as per normal instrumentation amp practice we put our gain in the first stage and have a second stage gain of unity.

The second reason is that in the top circuit any resistor value inaccuracies in the first stage will cause gain imblance between the two amplifier circuits which will in turn common mode signal into differential mode signal. The bottom circuit doesn't have this problem, regardless of resistor values it will essentially float on the common mode and (assuming the op-amps are linear) it will not turn common mode into differential mode.

Not the answer you're looking for? Browse other questions tagged operational-amplifier ground instrumentation-amplifier kirchhoffs-laws diff-amp or ask your own question.