How to power from among several sources and monitor which sources are active?

I have a microcontroller circuit that uses voltage dividers to monitor presence of 5V DC power from several sources, but the circuit is currently powered from a separate 5V DC source.

I've seen Schottky diodes used to control power from multiple sources, but typically when they are at different voltage levels (e.g., a switching supply and a battery).

1) Generally no. The currents may be high in comparison to normal diodes but they are still fairly low. Most power supplies act nicely and go to sleep if the output voltage is pulled a little above their set output voltage. Just about any resistance to ground from the output (e.g. the voltage sense feedback network) will sink enough current to prevent the reverse bias current from pulling the output voltage high enough to cause damage. Some switchers may possibly have problems if their output current drops to zero, normally the worst case is their output goes out of regulation and is higher than specified. Since you're not using the output this isn't an issue, as soon as it gets high enough to start to use it the current will increase and it'll fall back into regulation.

edit - As noted by neonzeon batteries are a different matter.

2) Yes. While in theory all the same the supplies outputs will end up being very slightly different so one supply will generally provide most if not all of the power.

3/4) You can easily tell which supplies are on, simply connect each one to a GPIO with sufficient voltage scaling and protection as required by the CPU. Generally this means either two resistors as a potential divider or a single series resistor to reduce the voltage and protect against excess current and then a clamping diode to the CPU VCC rail to prevent any potential over voltage issues as power supplies come up.

If the voltages are all very similar then a straight voltage comparison may not be reliable, you could be taking power from multiple sources. You would need to monitor the current from each power source. This generally involves putting a low value resistor in series with the power supply and then using a differential amplifier to measure the voltage drop across it. You could either feed this into an ADC and get the current for each source or into a comparator to tell you which source has the most current or which ones are over a certain threshold. 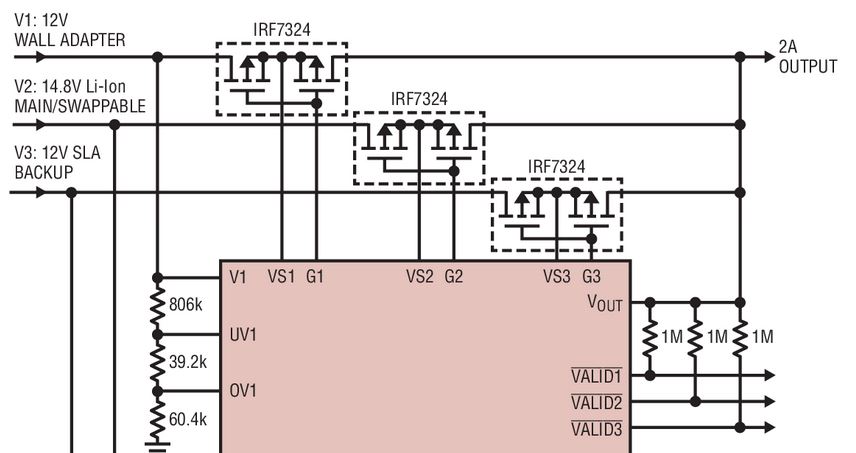 This is probably also a good place to mention the Underwriter Laboratories Two-Diode Rule for battery reverse charge protection.

Not the answer you're looking for? Browse other questions tagged microcontroller voltage-divider schottky or ask your own question.

11
Separating USB/MCU power buses
1
Switching between external power and batteries with varying voltages
2
microcontroller input protection with Schottky clipping diodes
2
Multiple DC power source to the board protected by schottky diodes
0
Schottky diodes as full bridge rectifier
1
How to use two power sources in a DC circuit
0
Minimise voltage drop during switching between external power supply and USB power for uC
2
Should I use a voltage regulator in tandem with a voltage divider to get 12V, 5V, and 3V from 14V power supply?
0
How to monitor your code execution written for any electronic device while they are operating?