For the circuit below, how do you do hand calculation to calculate DC operating point voltage Vo.

Actually, I can't find a way to do it now. Hope anyone can help. 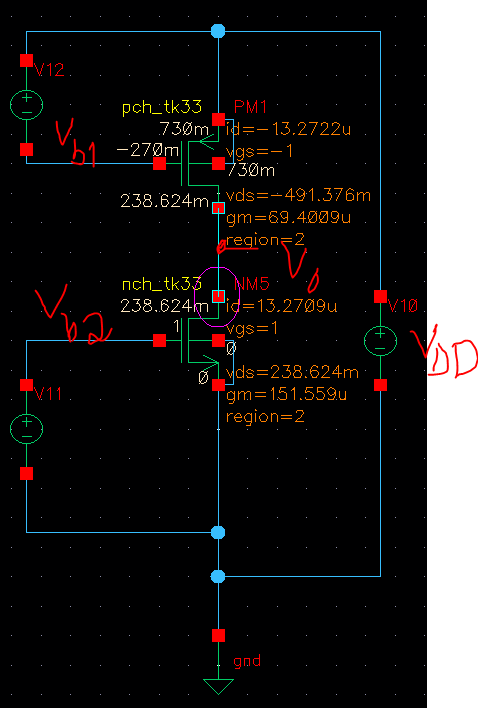 The answer is you can't.

You basically made 2 current sources, V11 and the PMOS the other one is V12 and the NMOS.

Answer: it could be anything. Two current sources of the same value in series behaves the same as one current source. The node in between can be any voltage you like.

But these are not ideal sources so their currents will not be the same. Then the current difference has to go somewhere. Where does it go ?

So what value will the currents that these sources want to source have ?

Also that is difficult to determine as you will have to know all parameters of the MOSFET making it a complex calculation. This is where the simulator comes in. You could make plots for the currents of NMOS and PMOS over all possible values of V0 (0 to VDD) and see where these plots cross.

This is also an impractical circuit and only inexperienced IC designers put a 1 V voltage source between Gate and Source of a MOSFET. What I do is make a current mirror. Then a MOSFET-diode makes a voltage from a given current and that should result in the same current in the other MOSFET (provided it's Vds is large enough).

Not the answer you're looking for? Browse other questions tagged circuit-analysis integrated-circuit circuit-design cmos or ask your own question.

0
Two Port Circuit
1
Half-wave rectifier with diode connected nMOS and pMOS
2
Why gmbs is not zero when B and S are tied together?
0
Calculate output impedance using negative feedback theory
0
How to calculate the maximum cable length of fire detection loop
2
Class A amplifier - Transistor Q-Point calculation
0
How to calculate current in a symmetric circuit diagram
0
Determine state of MOSFET transistor - trouble identifying Q-point